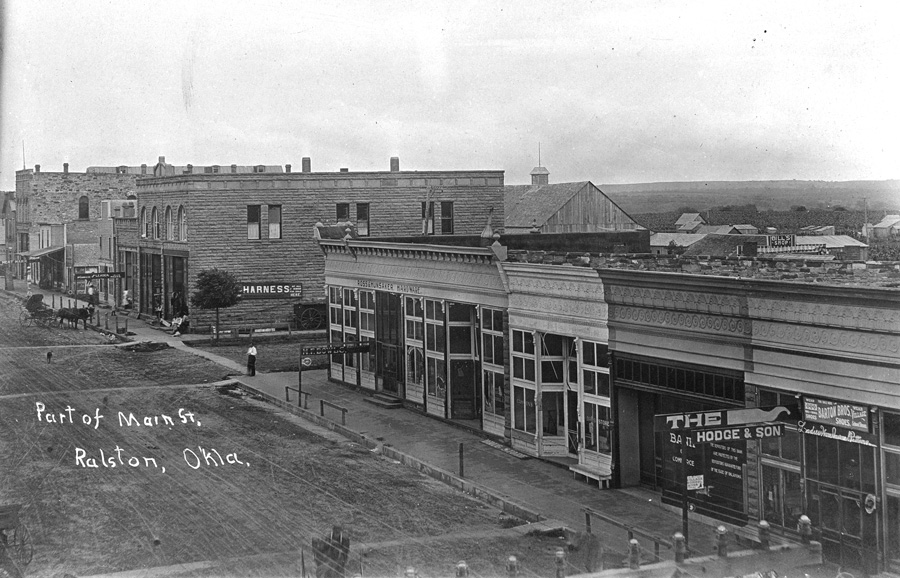 Located in northeastern Pawnee County, Ralston is situated on State Highway 18, approximately sixteen miles northeast of the county seat of Pawnee. The place was originally known as Riverside because it was located on the west bank of the Arkansas River, and a post office was designated on June 15, 1894. Historian George H. Shirk asserts that the town was renamed Ralston for townsite developer J. H. Ralston. On July 31, 1894, a townsite plat was filed. The railroad and a bridge soon connected Ralston with outside markets. On April 11, 1902, the Eastern Oklahoma Railway (later the Atchison, Topeka and Santa Fe Railway, AT&SF), building from Newkirk to Pauls Valley, reached Ralston. By November 13, 1903, the Canton Bridge Company had constructed a bridge across the Arkansas River from Ralston to the Osage Nation. In early 1927 the Osage County and Santa Fe Railway (later, the AT&SF) built a line from Pawhuska (Osage County) to Ralston, connecting it to the previously completed line from Newkirk to Ralston in 1902.

On March 16, 1903, territorial Gov. Thompson B. Ferguson signed a legislative bill authorizing the incorporation of Ralston. An early, short-lived enterprise was started by Charles Dodson, who mined coal nearby and sold it to townspeople. Due to Ralston's close proximity to the Osage Reservation, where liquor was banned, saloonkeepers derived a thriving business before 1907 statehood and prohibition. In 1903 seven saloons operated on Main Avenue. By 1909 three banks, two weekly newspapers, and a public school served the community. Citizens had organized Baptist, Catholic, Methodist Episcopal, and Presbyterian churches. Nine years later the town had evolved into an agricultural trade center that offered a cotton gin, a sorghum mill, and two elevators. The Ralston Water and Light Plant provided utilities. In the 1930s a cotton gin, a broom factory, an elevator, a wholesale oil company, and a sand company operated. During the early 1930s outbound shipments consisted of grain and sand, and inbound brought livestock, fuel, and general merchandise to the community. Between the mid-1940s and 1950s a blacksmith, a sand and gravel company, and a petroleum products and implements company as well as grocery stores and gasoline stations served the Ralston area.

At 1907 statehood Ralston's population stood at 587. Through the next three decades the numbers increased from 597 in 1910 to a high of 725 in 1930. The population declined to 621 in 1940 and 411 in 1960. The 1970 and 1980 census reported 443 and 495 residents, respectively. At the turn of the twenty-first century population numbers reached a low of 355. Of the employed residents, 89.9 percent commuted by car, 3.7 percent used public transportation, and 6.4 percent walked. The 2010 census counted 330 inhabitants.Local attractions include the White Hair Memorial, a learning center for Osage tribal culture, and the Ralston Opera House (NR 87001257), listed in the National Register of Historic Places.

The following (as per The Chicago Manual of Style, 17th edition) is the preferred citation for articles:
Linda D. Wilson, “Ralston,” The Encyclopedia of Oklahoma History and Culture, https://www.okhistory.org/publications/enc/entry.php?entry=RA007.