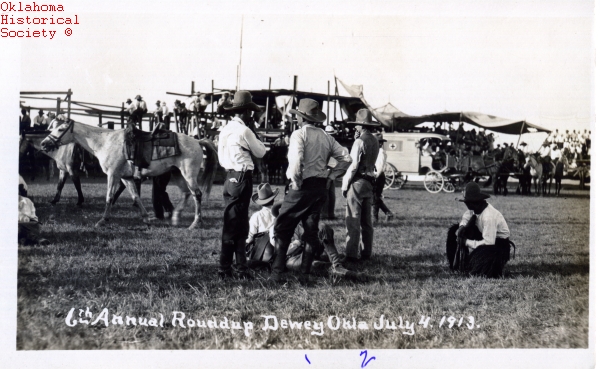 A working cowboy's everyday duties included riding, roping, branding, horse breaking, and the like, and these activities often served also as his pastime. In the spring, when various ranches cooperated in the roundup, men competed informally, wagering on the fastest roper, the best horse breaker. In Oklahoma, Texas, New Mexico, and Arizona, large ranches often encouraged "cowboy contests" in roping, riding, and horse breaking, and the sport of rodeo evolved from them in the late nineteenth century.

Ranch rodeo-type events in early Oklahoma are documented in interviews in the Indian-Pioneer Papers and in local newspapers. Such was the case with contests held near Dewey, Covington, Britton, Bromide, and other ranching communities around the turn of the century. Often called "round-ups" or "cowpuncher reunions" at first, these informal rodeos were later promoted as "frontier days" or "pioneer days" by canny officials in nearby towns. The Dewey Roundup, held since 1908, is an example.

Many early-day professional rodeo cowboys started in ranch rodeos or community rodeos. Traveling extravaganzas like the Miller Brothers' 101 Ranch Wild West show were not ranch rodeos; the cowboys were paid performers. As rodeos became more organized, and prizes and prize money became available, a rodeo circuit developed. In the 1930s and 1940s the sport became increasingly professionalized, with organizers, entry fees, and livestock contractors. Working cowboys (those who really did ranch work for a living) were correspondingly excluded from the traveling circuit.

Ranch rodeos, however, remained popular pastimes for Oklahoma's working cowboys well into the twenty-first century. The various competitive categories in ranch rodeo have always reflected the everyday chores associated with cattle raising. The skills have never differed from those of the professionals, but working cowboys did not "specialize" in one or two events. Like regular ranch work, the ranch rodeo emphasizes all-around skills and teamwork. Events usually include calf "branding" (using chalk), steer "mugging" (throwing and tying a yearling steer), wild cow milking, team roping, and team penning. Occasionally there are rough stock (bucking) events and horse racing. The spectacle associated with Professional Rodeo Cowboys Association rodeo is generally not a feature of ranch rodeo.

The following (as per The Chicago Manual of Style, 17th edition) is the preferred citation for articles:
Dianna Everett, “Ranch Rodeo,” The Encyclopedia of Oklahoma History and Culture, https://www.okhistory.org/publications/enc/entry.php?entry=RA011.