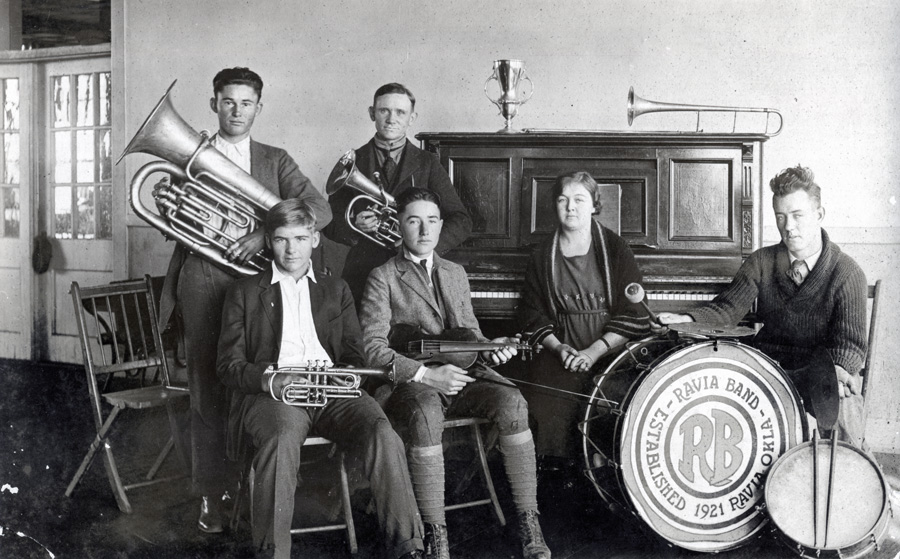 Located in Johnston County, Ravia lies four miles west of Tishomingo at the intersection of State Highways 1 and 22. The town name honored Joseph D. Ravia, a Texan of Mexican descent, who had married a Chickasaw and settled in the region. In 1894 the Post Office Department designated a Ravia post office, with Eliza Forbess as postmaster. In 1899 the residents petitioned the U.S. Southern Indian Territory District Court to incorporate the town. They stated that the community had seventeen business establishments and thirty residential buildings. The court finalized the procedure in May 1899.

In 1900 Ravia's population stood at 128. In 1900–1901 the St. Louis, Oklahoma and Southern Railway (acquired by the St. Louis and San Francisco Railway in June 1901) laid tracks near Ravia. The business district shifted to the railroad, which increased the number of residents. In 1901 the estimated population was five hundred, and a bank, two sawmills, a livery, a blacksmith shop, two wagonyards, four general stores, four doctors, five stockmen, and several other retail outlets served the town. The community became a shipping center for agricultural products. At 1907 statehood the population stood at 690.

In 1908 fire destroyed most of Ravia's business district. At the time newspapers claimed the community had twelve hundred residents, but by 1910 the population was down to 556. By 1911 the town had added a Farmers' Union Cotton Company, a corn mill, two hotels, an opera house, and the Ravia Weekly News. Other early newspapers included the Ravia Gazette, the Ravia Herald, the Ravia Tribune, and the Ravia Times. In 1910 a small gold vein was discovered, creating a short-lived mining rush. Other natural resources were mined or extracted in the region, creating either brief or long-term industries. These included lead and zinc, petroleum and natural gas, sand and gravel, dimension stone (granite), and asphalt. In 1920 the population was 513, and it declined to 345 in 1930. The school system matured from a subscription school, to an eight-year public school, to a high school (circa 1918), and by the 1930s a consolidated high school.

As Ravia declined, the school district reverted to a kindergarten-through-eighth-grade system. In the year 2000 the school educated eighty-four students, and Ravia's population was 459. The 2010 census registered 528 residents. Gene Autry (1907–98) was raised at Ravia and worked at the railroad depot before succeeding in the entertainment world. Jonas Wolfe (1828–1900), a two-term governor of the Chickasaw Nation, resided south of Ravia. He is buried there.

The following (as per The Chicago Manual of Style, 17th edition) is the preferred citation for articles:
Larry O'Dell, “Ravia,” The Encyclopedia of Oklahoma History and Culture, https://www.okhistory.org/publications/enc/entry.php?entry=RA019.