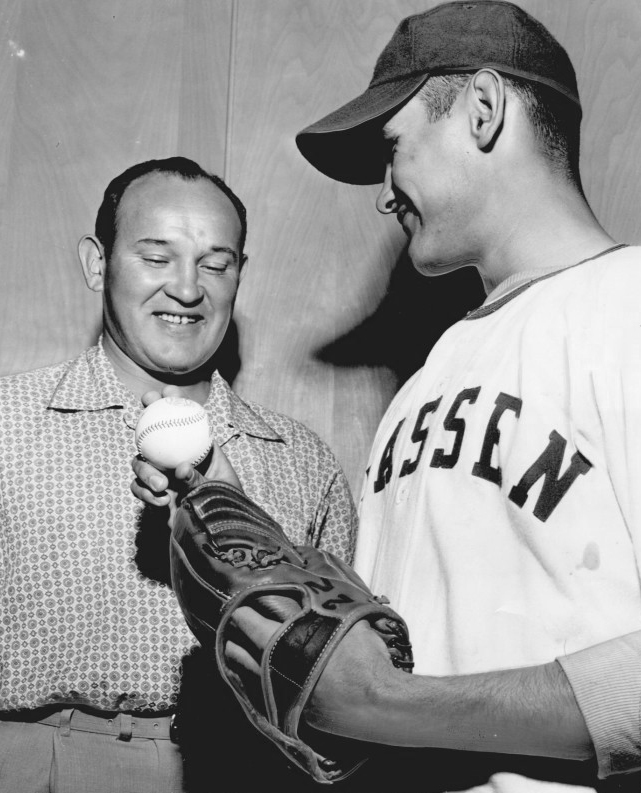 Known as the "Super Chief" for his Creek heritage, Allie Reynolds earned a reputation for super performances with his super fastball in critical World Series and pennant-deciding games for the New York Yankees from 1947 through 1954. Born in Bethany, Oklahoma, on February 10, 1917, he played football at Oklahoma A&M College (now Oklahoma State University) from 1936 through 1938. He was pitching in an intramural game when Hank Iba, then baseball and basketball coach, asked him to pitch for the college team. That led to his professional career.

Reynolds built a 182–107 record during his thirteen-year major league career, which started with the Cleveland Indians in 1942. He also saved 49 games in 125 relief appearances. Beyond that, he won seven World Series games against only two losses for the Yankees, saved another five, and pitched two no-hitters during the 1951 pennant stretch. He beat the Brooklyn Dodgers 1-0 with a two-hitter in a classic pitching duel with Don Newcomb in the 1949 series and won the final game of the 1950, 1952, and 1953 series.

He beat Cleveland with a no-hitter on July 12, 1951, defying a baseball superstition by talking about it during the game. On September 28, with the pennant on the line, he shut out Boston 8–0 with his second no-hitter of the season, an American League record. Yogi Berra dropped a pop fly by Boston's Ted Williams for what would have been the final out, so Reynolds threw another fastball, and Williams popped out again to end the game.

The following (as per The Chicago Manual of Style, 17th edition) is the preferred citation for articles:
Max Nichols, “Reynolds, Allie Pierce,” The Encyclopedia of Oklahoma History and Culture, https://www.okhistory.org/publications/enc/entry.php?entry=RE038.