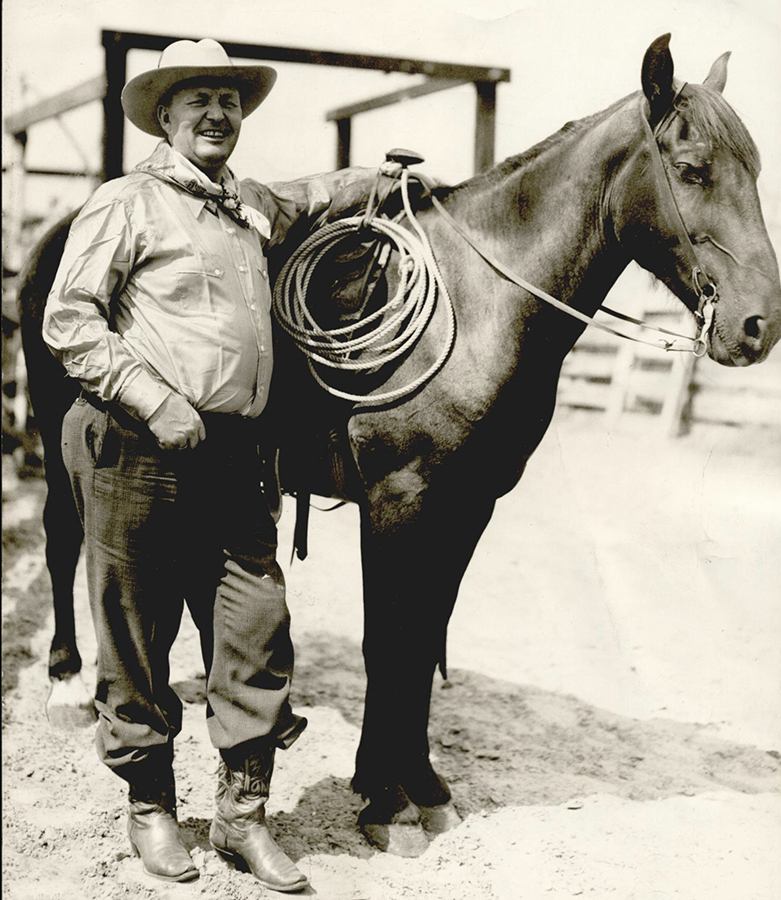 Born in a prairie dugout near Beaver, Oklahoma, on July 5, 1892, and known as "Ross," U.S. Rep. Roscoe Rizley was the son of Robert M. and Arabella Narcissus McCown Rizley. Educated in the Beaver public schools, the future U.S. representative then took courses at the summer normal school also at Beaver. After he received his teacher's certificate, Rizley taught in the rural schools of Beaver County in 1909 and 1910. In 1911 he attended Hill's Business College in Oklahoma City. After a brief stint as deputy registrar of deeds of Beaver County in 1912, he moved to Kansas City, Missouri, to attend the Kansas City School of Law from which he received an LL.B. in June 1915.

Admitted to the Oklahoma bar in 1915, he began his practice of law in Beaver in a partnership with R. H. Loofbourrow. The following year he married Ruby Seal, also of Beaver. The couple had seven children. In 1918 he became county attorney of Beaver County, a position he held until 1920 when he moved to Guymon in Texas County. Over the next several years he practiced law and was very active in Guymon civic affairs and in the chamber of commerce. He served as Guymon city attorney, served on the school board, helped organize the Lions Club, and participated in various fraternal organizations.

A lifelong Republican, Rizley was elected to the Oklahoma Senate in 1930. Although serving but one term, he had achieved some distinction in public service in the state. By the late 1930s the Republican Party in Oklahoma was on the verge of collapse. Indeed, he supported abandonment of the party in favor of a "grass roots" coalition of all anti-New Dealers. The Republicans, nevertheless, rallied and nominated him as their gubernatorial candidate in 1938. Although defeated, he rebounded two years later and won election to the U.S. House of Representatives from Oklahoma's Eighth District. He held this congressional seat for four terms.

During his eight years in Congress he served on various committees, including Agriculture, Rules, and Expenditures in the Executive Department. As a member of this last committee, he chaired the Subcommittee on Surplus Property and was instrumental in exposing the waste and disorder in the disposal of government property after World War II. His pioneer work with this subcommittee ultimately led to the establishment of the General Services Administration. In his last term he also chaired the Special Committee to Investigate Campaign Expenditures. In 1948 he made an unsuccessful bid for the U.S. Senate seat being vacated by Edward H. Moore. Robert S. Kerr, the former Oklahoma governor who was the Democratic candidate, launched a partisan attack on the congressman and charged that he was both a military and economic isolationist. Following Rizley's defeat, he resumed private law practice.

With the Republican victory in the presidential election of 1952, Rizley again entered public service. From March to December 1953 the former congressman served as a solicitor for the Post Office Department, from December 1953 to December 1954 as assistant secretary of agriculture, from December 1954 to February 1955 as special assistant to the postmaster general, and from February 1955 to April 1956 as a member of the Civil Aeronautics Board. While with the CAB, he was named to the Oklahoma Hall of Fame.

In 1956 Rizley resigned his CAB post to become judge of the U.S. District Court for the Western District of Oklahoma, thus becoming one of the few people to serve in all three branches of the federal government. Interestingly, Kerr made the motion for Rizley's confirmation in the Senate. Rizley served as a federal judge until his death in Oklahoma City on March 4, 1969. He was interred at Elmhurst Cemetery in Guymon.

The following (as per The Chicago Manual of Style, 17th edition) is the preferred citation for articles:
Carolyn G. Hanneman, “Rizley, Roscoe,” The Encyclopedia of Oklahoma History and Culture, https://www.okhistory.org/publications/enc/entry.php?entry=RI016.