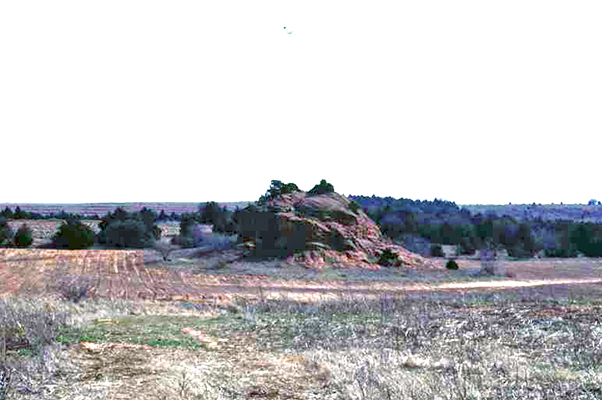 A geographical feature and a travelers' landmark, Rock Mary is a large, red sandstone outcrop, or butte, located approximately 4.75 miles west of Hinton, in Caddo County, Oklahoma, and about a mile from Sugar Creek, a tributary of the Washita River. A number of similar features, earlier called "Natural Mounds," occur in the vicinity, about midway between the Canadian and Washita rivers. Rising above a fairly level plain that is at an elevation of approximately 1,600 feet above sea level, the Rock is approximately sixty feet in height and approximately two hundred feet in diameter. It stands alone, east of the other mounds. It is composed primarily of Permian-age Rush Springs sandstone capped with Weatherford dolomite. The Rock is visually characterized by two tower-like projections that loom upward from the top.

Rock Mary appears in official reports made by explorers and surveyors in the mid-nineteenth century. Lt. James W. Abert in 1848 was the first to note and describe the "mounds" as a group of features, but he did not distinguish between them. Capt. Randolph B. Marcy's expedition was the first to record the butte that is called Rock Mary. He led a party of emigrants across present Oklahoma in spring 1849 on a route that came to be known for a short period as the California Road. A detachment led by Lt. James H. Simpson first spied the large feature with the twin projections and on May 23, 1849, named it for Mary Conway, a young woman among the emigrants. Later, railroad and wagon-road surveys of the area provided additional descriptions, including those of Lt. Amiel W. Whipple and artist Heinrich Balduin Möllhausen in 1853 and Lt. Edward F. Beale in 1858. Möllhausen's drawing remains the most accurate picturing of Rock Mary in the 1850s, and the original image resides in the Whipple Collection at the Oklahoma Historical Society (OHS).

In 1960 the OHS board selected a committee of historians, including George Shirk and Muriel Wright, to plot the precise location of Rock Mary and distinguish it from the other similar outcrops. For several months the committee pored over the Whipple and Simpson reports, various maps, and Möllhausen's drawings, and then went on the ground to follow, as much as possible, the route taken by Simpson through the locality. Using various landmarks and correlating the descriptions and images, the group reached the conclusion that the large outcrop in Section 1, Township11 North, Range 12 West, was the historical Rock Mary. It is now so designated on official topographic maps of the U.S. Geological Survey. OHS placed appropriate descriptive markers on the Rock and near the town of Hinton. Lone Mound and Dead Woman's Mound lie to the west, and Red Rock Canyon State Park lies to the east, south of Hinton. In 1970 listed in the National Register of Historic Places (NR 70000528) for its significance in Oklahoma's transportation history, Rock Mary is situated on private property five miles south of Interstate 40 off County Road E1060.

The following (as per The Chicago Manual of Style, 17th edition) is the preferred citation for articles:
Dianna Everett, “Rock Mary,” The Encyclopedia of Oklahoma History and Culture, https://www.okhistory.org/publications/enc/entry?entry=RO012.