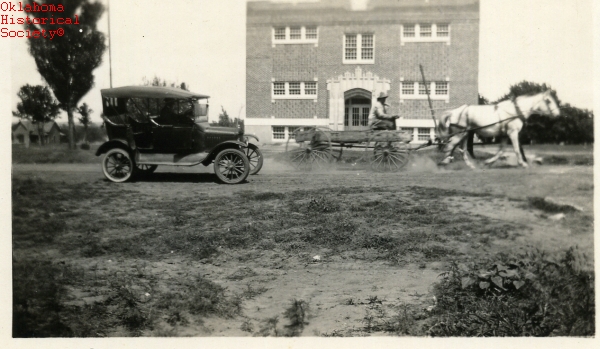 An incorporated community in Pontotoc County, Roff is situated along State Highway 1, eighteen miles southwest of Ada and ninety-five miles southeast of Oklahoma City. The town was named for Joseph T. Roff, a rancher who moved from Texas to the Chickasaw Nation, Indian Territory, in 1871. Roff and his Choctaw wife and children settled near the present townsite in 1883. A community developed along the nearby Blue River soon after Roff began leasing his land to whites in 1885. A subscription school was established there in 1889 and a post office, designated Roff, opened in June 1890. Joseph Roff served as postmaster.

The St. Louis, Oklahoma and Southern Railway (purchased by the St. Louis and San Francisco Railway in 1901) was constructed just south of Roff in December 1900. As a result, the village was relocated along the line and surveyed the following spring. A townsite company was then organized and community lots were sold. Joseph Roff was the town's first mayor.

Roff thrived as an agricultural community. Cotton gins, flour mills, and grain stores operated in town, and area farmers raised cotton, cattle, hogs, horses, and a variety of fruits. Other early businesses included a bottling works, a brick plant, and bakeries. The Mid-Continent Glass Sand Company was organized in 1912. Used in the manufacture of jars, tableware glasses, and containers, silicon dioxide (glass sand) remained a local export into the twenty-first century. The Roff Tribune, the Roff Enterprise, the Roff Eagle, and the Blue Valley Farmer were among the town's newspapers.

Roff had 734 residents and fifteen commercial enterprises in 2000. Businesses included a restaurant, an automobile dealership, two gasoline stations with convenience stores, and a housing construction firm. In 2000 the Roff School District enrolled 330 students. The 2010 census counted 725 inhabitants. The Roff National Guard Armory was listed in the National Register of Historic Places (NR 97001151).

Joe T. Roff, "Reminiscences of Early Days in the Chickasaw Nation," The Chronicles of Oklahoma 13 (June 1935).

The following (as per The Chicago Manual of Style, 17th edition) is the preferred citation for articles:
Jon D. May, “Roff,” The Encyclopedia of Oklahoma History and Culture, https://www.okhistory.org/publications/enc/entry.php?entry=RO016.