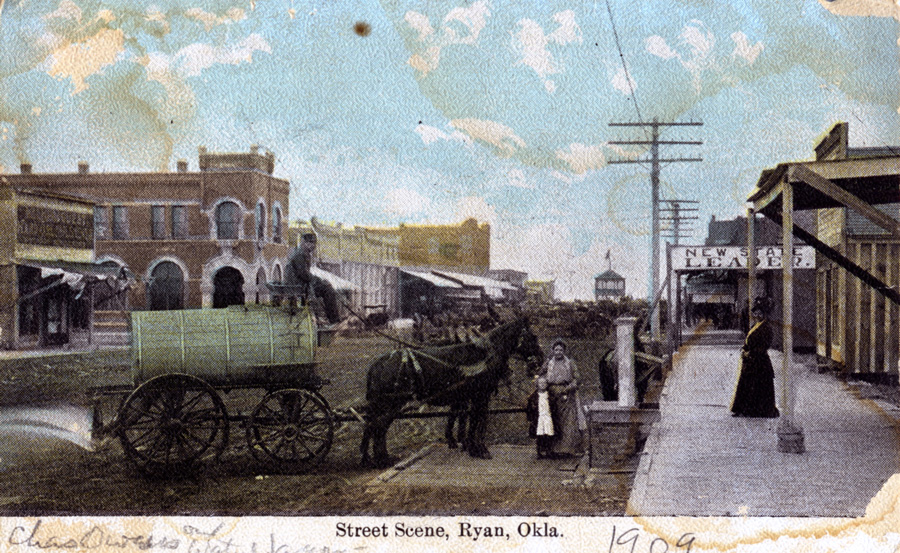 The incorporated community of Ryan is located in southwestern Jefferson County and is situated some two miles north of the Red River at the intersection of U.S. Highway 81 and State Highway 32. The town is eleven miles south of Waurika and 115 miles south by southwest from Oklahoma City. It was named in honor of rancher Stephen W. Ryan, an Arkansas native who settled near present Ryan in 1875.

As a result of his marriage to a Chickasaw woman, Ryan acquired vast acreage in present Jefferson County, Oklahoma, then a part of Pickens County, Chickasaw Nation, Indian Territory. When the Chicago, Rock Island and Pacific Railway constructed a station on Ryan's land in 1892, he platted the townsite that bears his name. A post office had been established in that locality in June 1890, and his home, built circa 1877, was the community's first residence.

Delegates attending the 1906 Constitutional Convention selected Ryan as the seat of Jefferson County. The town lost that distinction in February 1912 when county voters chose Waurika to be their county seat. Ryan developed as an agricultural and ranching community. Local ranchers raised cattle and hogs, and farmers produced cotton, corn, and wheat. The fruit industry was a prosperous enterprise, as pears, peaches, apples, plums, and strawberries were grown in abundance.

A fire nearly destroyed Ryan in December 1895. The residents rebuilt, and by 1908 the community had thirty businesses, including two banks, a hotel, a cotton gin, two lumberyards, a flour mill, and a cottonseed oil mill. By 1930 the townspeople enjoyed one mile of paved roads, two schools, three hundred telephone connections, and a bus line.

As Ryan entered the twenty-first century, four Protestant churches and one Catholic church, and two primary and secondary schools were available to the public. The Ryan public schools and the Ryan Nursing Home were the town's major employers. The weekly Ryan Leader, the community's lone newspaper in 2003, originated as the Ryan Record in 1894.

The following (as per The Chicago Manual of Style, 17th edition) is the preferred citation for articles:
Jon D. May, “Ryan,” The Encyclopedia of Oklahoma History and Culture, https://www.okhistory.org/publications/enc/entry.php?entry=RY001.