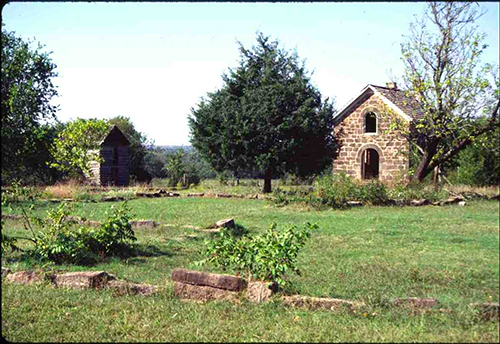 A Roman Catholic institution founded May 13, 1877, by Father Isidore Robot, O.S.B., Sacred Heart Mission (later Sacred Heart Abbey) and its successor institution, St. Gregory's Abbey and University, constitute Oklahoma's oldest educational center in continuous operation. Robot, a Benedictine monk, had arrived in the Indian Territory in October 1875 with a lay brother companion. The two had left their home monastery in France when the Laic Laws threatened to close many Catholic institutions.

Other members of the French community soon joined Robot, and the Potawatomi Nation offered a section of land four miles north of the Canadian River in the southeast corner of what is now Pottawatomie County. By 1880 Robot had built a monastery, schools for Indian boys and girls, a technical institute, and a seminary. In 1892 he constructed a large church. Four years later Sacred Heart was raised to abbatial rank, and the monks elected their first abbot.

Fire destroyed the large complex of frame buildings during the night of January 14–15, 1901. The facilities were quickly rebuilt, but by that time the monks had realized that the nearest railroad would not be close enough to make a secondary school viable on the site. They therefore established St. Gregory's College at Shawnee, thirty-five miles north. The new school opened in September 1915.

As other monastic operations thereafter gravitated to Shawnee, Sacred Heart reverted to priory status, with the seat of the abbey transferred to St. Gregory's in 1929. Sacred Heart Priory closed in 1955 and most of its buildings were razed.

The following (as per The Chicago Manual of Style, 17th edition) is the preferred citation for articles:
James D. White, “Sacred Heart Abbey,” The Encyclopedia of Oklahoma History and Culture, https://www.okhistory.org/publications/enc/entry.php?entry=SA004.