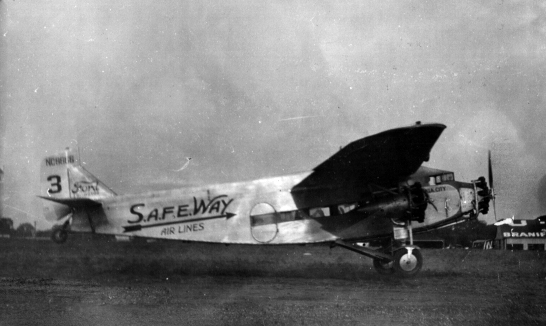 Charles A. Lindbergh's 1927 trans-Atlantic flight created enormous public interest in air travel. One of the airlines formed during the boom period of the late 1920s and early 1930s was Southwest Air Fast Express of Tulsa, better known as S.A.F.E.way Airlines. S.A.F.E.way was the brainchild of Erle P. Halliburton, founder of an oil-well servicing company based in Duncan, Oklahoma. Halliburton envisioned an airline that could operate profitably without an airmail subsidy by providing passenger service at rates offered by railroads. With Oklahoma oilmen as stockholders, S.A.F.E.way began Ford Tri-Motor service between St. Louis and Dallas in April 1929. In June service was expanded to include Los Angeles and New York City.

Contrary to predictions of failure, S.A.F.E.way was operating at only a slim loss by 1930, and Halliburton realized an airmail contract would make the airline profitable. His decision to bid coincided with the passage of the McNary-Watres Act of 1930, which granted sweeping power concerning awarding of airmail contracts. Further, U.S. Postmaster General Walter F. Brown was intent on bolstering the airline industry by eliminating the small, independent companies that were competing with the larger carriers. In what is known as the "Spoils Conferences," Brown divided among the major carriers the routes that each were to bid on. Excluded because his company was a small carrier, Halliburton bid for the southern route at a rate so low it almost guaranteed a loss. Desperate for the contract, American Airlines, through a complicated agreement, purchased S.A.F.E.way for $1.4 million, far more than Halliburton's own inflated valuation of the company.

Although S.A.F.E.way Airlines existed for little more than a year, it established the concept of profitable passenger operations. It is certain that the S.A.F.E.way experiment influenced other airlines, with a resulting emphasis on the future of passenger air travel. The sale of S.A.F.E.way did not mark the end of Halliburton's interest in aviation. He went on to patent an automatic pilot and an innovative aircraft tire, and he personally financed the tooling of the Halliburton plant to produce numerous critical aircraft parts during World War II.

The following (as per The Chicago Manual of Style, 17th edition) is the preferred citation for articles:
Keith Tolman, “S.A.F.E.Way Airlines,” The Encyclopedia of Oklahoma History and Culture, https://www.okhistory.org/publications/enc/entry.php?entry=SA006.