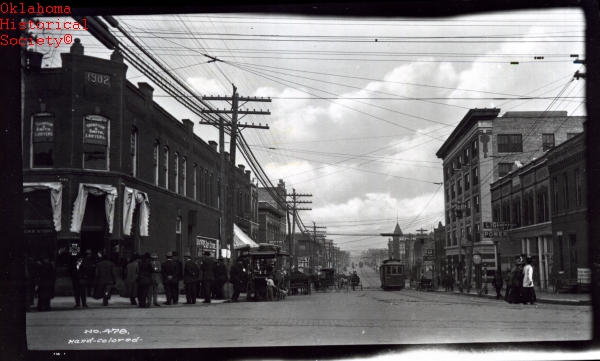 The county seat of Creek County, Sapulpa is situated approximately twelve miles southwest of Tulsa along Interstate 44. State Highways 33 and 97 and Historic Route 66 also lead travelers to Sapulpa. The town is named for "Chief" James Sapulpa, a full-blood Lower Creek from Alabama, who came to Indian Territory and around 1850 established a trading post about one mile southeast of the present community. In 1886 the Atlantic and Pacific Railroad (later the St. Louis and San Francisco Railway) extended its line from Red Fork to this area. This place became known as Sapulpa Station in honor of Sapulpa, who had befriended railway workers. A post office was established on July 1, 1889, and the town was incorporated on March 31, 1898. The Euchee Mission Boarding School was built nearby in 1894 to educate American Indian children.

The first three decades (1890–1920) of Sapulpa's rapid growth can be attributed to railroad activities and to the exploitation of natural resources, such as walnut trees, clay, petroleum, natural gas, and sand for glass manufacturing. The town's first industry was the harvesting of walnut trees. In 1898 the second industry was born with the establishment of the Sapulpa Pressed Brick Company, and a few years later Sapulpa Brick Company began operating. By 1900 the railroad designated Sapulpa as a division point or overhaul base for its rolling stock, giving the town its first major industry. This initial period of economic development continued until February 10, 1927, when the railroad moved its maintenance shops to Tulsa. On November 22, 1905, a discovery well four miles southeast of town opened up the prolific Glenn Pool Field. During the oil boom the population almost doubled, from 4,259 in 1907 to 8,283 in 1910. By the 1920s citizens were also employed at Oklahoma's largest cotton compress and at four glass plants.

Following statehood on November 16, 1907, elections were held to establish permanent county seat towns in the Oklahoma counties. Sapulpa and Bristow competed against each other for county seat in Creek County. After five years of contested elections and bitter court battles, the Oklahoma Supreme Court decided in favor of Sapulpa on August 1, 1913. The courthouse, completed in 1914 and now listed in the National Register of Historic Places (NR 85000679), replaced a two-story brick structure built in 1902.

The following (as per The Chicago Manual of Style, 17th edition) is the preferred citation for articles:
James W. Hubbard, “Sapulpa,” The Encyclopedia of Oklahoma History and Culture, https://www.okhistory.org/publications/enc/entry.php?entry=SA021.