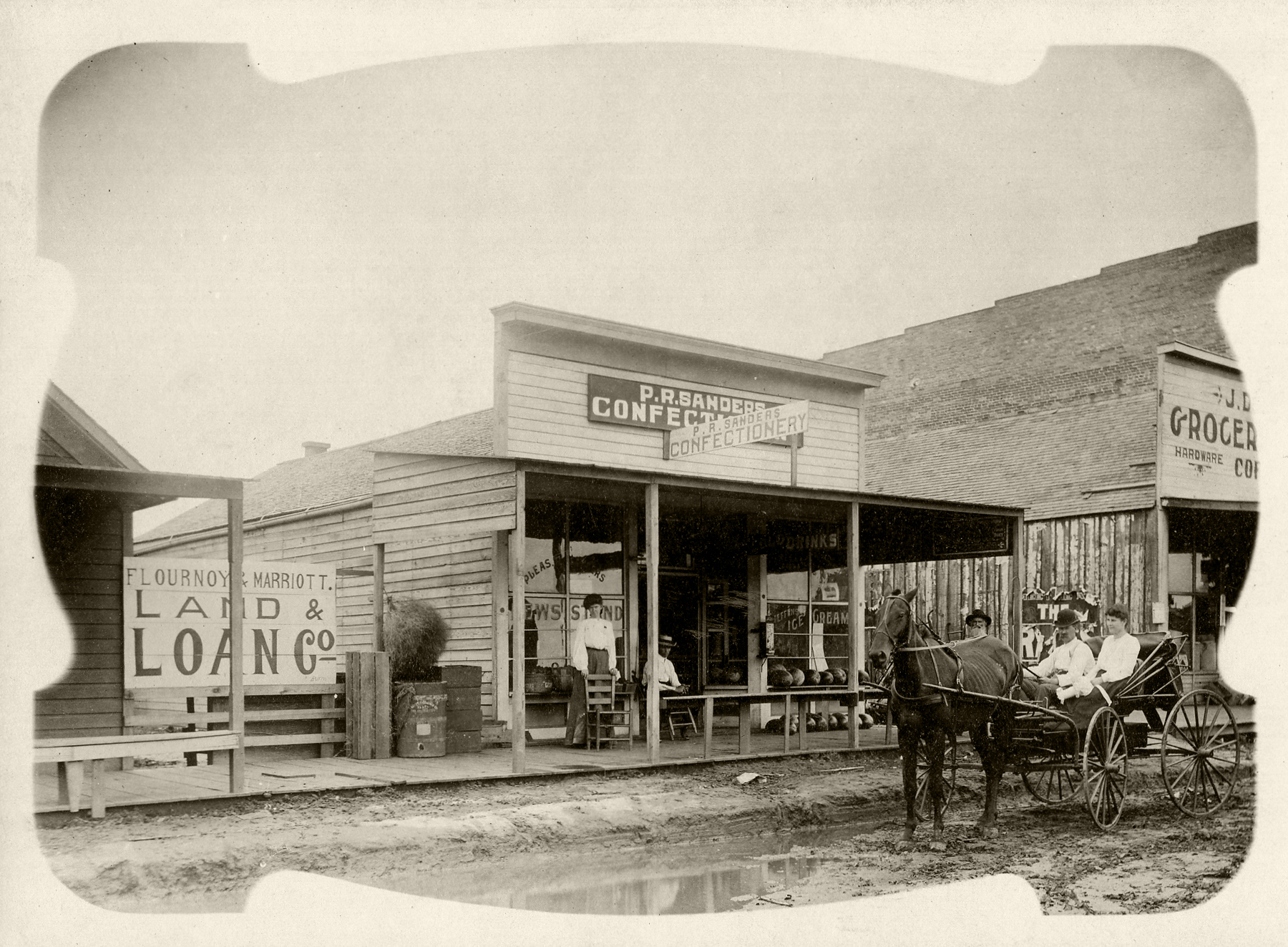 Sayre, the county seat of Beckham County, is located 128 miles west of Oklahoma City on Interstate 40. Centrally located within the county, the town lies on the north side of the North Fork of the Red River. Prior to its incorporation on September 14, 1901, approximately two hundred individuals lived in the vicinity, possibly settlers who participated in the Cheyenne-Arapaho land opening. Sayre was named for Robert H. Sayre, a stockholder of the Choctaw, Oklahoma and Gulf Railroad. The Choctaw Townsite and Improvement Company bought land from J. W. Danner, J. M. Danner, G. W. Roles, James N. Lennox, and William M. Hutton on which to build the townsite. A post office was established on October 23, 1901. The community quickly developed after the Choctaw, Oklahoma and Gulf Railroad (later part of the Chicago, Rock Island and Pacific Railway) reached it in 1901. From 1901 to 1907 Sayre was located in southern Roger Mills County. At 1907 statehood southern Roger Mills County and northern Greer County were joined to form Beckham County.

Soon after the town's founding, residents organized the Baptist, Catholic, Christian, Methodist, and Presbyterian churches. By 1909 Sayre supported two cotton gins, two banks, and two weekly newspapers (the Sayre Headlight and the Sayre Standard). The community served as a shipping point for cotton, wheat, corn, and livestock. Women operated a hotel, a laundry, and a photography shop. Nine years later, due to economic growth two additional cotton gins as well as two grain elevators and a flour mill functioned. In addition to agriculture Sayre's economy has been based on oil and gas. By the 1930s five oil companies and a gasoline plant employed residents. In the early 1930s fifty-one people worked at the Sayre carbon plant, owned and operated by the United Carbon Company, headquartered in Charleston, West Virginia. In January 1998 the North Fork Correctional Facility, a private, medium-security prison, opened.

Some of the early-day businesses that continued for many years included the Bank of Sayre, Puckett's Food Store, and the Owl Drug Store. Opened on September 30, 1901, the Bank of Sayre remained viable as the Great Plains National Bank in 2000. Jessie Blaine Puckett and his younger brother started Puckett's Food Store in Sayre in 1910. At one time they owned thirteen stores in nearby towns. At the turn of the twenty-first century the Puckett family continued to operate seven stores, including two locations in the Texas Panhandle. The Owl Drug Store, begun in 1901, operated until 1997.

At 1907 statehood Sayre was selected as a temporary county seat. In June 1908 Sayre and Erick competed for the designation. Sayre won by a small margin in the election. The Beckham County Courthouse, listed in the National Register of Historic Places (NR 84002968), was completed in 1911 and was filmed in a scene in the 1940 movie The Grapes of Wrath. An Anthony's store opened in 1925. During the 1930s and 1940s the town's amenities included a public library, a hospital, a forty-acre city park, a golf course and swimming pool, baseball and softball fields, a racetrack, and a rodeo grounds. Meeting the challenge of the junior college movement, Sayre Junior College opened in 1938, closed during World War II, and reopened in 1946. The school merged with Southwestern Oklahoma State University on July 1, 1987. As a branch campus, it is designated as Southwestern Oklahoma State University at Sayre. Vocational-technical education was offered at the Sayre branch of the Western Technology Center, which opened in 1995.

At the turn of the twenty-first century Sayre had an aldermanic form of government. Residents supported a school system with grades prekindergarten through high school. City amenities included an eighty-acre park, a golf course, tennis courts, and a swimming pool. Local attractions included the RS & K Railroad Museum, the Old Hotel, built in 1898, and the Sayre Rock Island Depot (also known as the Shortgrass Country Museum, NR 00000654). The J. W. Danner House (NR 02000169), the Sayre Downtown Historic District (NR 02000972), the Sayre City Park (NR 04000127), and the Sayre Champlin Service Station (NR 04000130) were added to the National Register at the turn of the twenty-first century. The weekly Sayre Record & Beckham County Democrat served the citizens. Former prominent residents include the opera singer Joseph Benton and the prizefighter Jess Willard.

The following (as per The Chicago Manual of Style, 17th edition) is the preferred citation for articles:
Linda D. Wilson, “Sayre,” The Encyclopedia of Oklahoma History and Culture, https://www.okhistory.org/publications/enc/entry.php?entry=SA027.