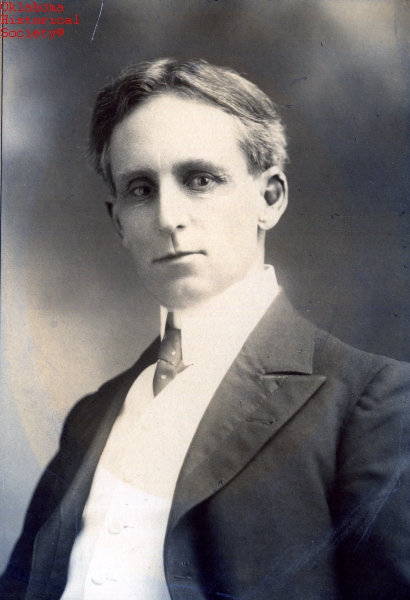 Oklahoma educator and civic leader Angelo C. Scott, son of John W. and Maria Protsman Scott, was born on September 25, 1857, near Franklin, Indiana. Educated in Kansas public schools and by private tutors, he completed the bachelor's (1877) and master's (1880) degrees at the University of Kansas. He taught in the Kansas public schools for three years and was elected court clerk of Allen County, Kansas. In 1885 he obtained two law degrees from George Washington University and returned to Iola, Kansas, to practice law.

Scott came to Oklahoma Territory (O.T.) in the Land Run of 1889. As one of the original Oklahoma City settlers, he opened a law office and operated a hotel. With his brother, he founded Oklahoma City's first newspaper, the Oklahoma Times. Scott helped organize the Oklahoma City Chamber of Commerce, the Oklahoma City Young Men's Christian Association, and the Men's Dinner Club. He was a charter member of the First Presbyterian Church and founded the Oklahoma Institute of Arts and Sciences.

Pres. Benjamin Harrison appointed Scott to the Oklahoma City town site board to handle land claim disputes in 1890. From 1891 to 1892 he served as United States Commissioner for O.T. In 1893 Gov. Abraham J. Seay appointed him Oklahoma's executive commissioner to the Columbian Exposition in Chicago. After marrying Lola Smeltzer in 1894, Scott was elected to the territorial senate and served as president pro tempore from 1895 to 1897. Defeated for reelection, he accepted an invitation to teach English and literature at Oklahoma A&M College (now Oklahoma State University).

In 1899 Scott became president of the college. Although he believed in the school's land-grant mission of emphasizing agriculture and engineering, he was not an agriculturalist. He wanted to develop a liberal arts curriculum to widen the institution's appeal. During his nine-year presidency the college grew with the construction of several buildings and the doubling of the faculty, a constellation of scholars said to be unexcelled by any land-grant college in the region. Scott coached the oratory teams and with his wife established an informal music department. He also encouraged the development of athletics and wrote the college's first fight song.

When Oklahoma citizens elected a full slate of Democratic officials in 1907, Scott was told that all Republican appointees would lose their jobs. He resigned on June 30, 1908, and returned to Oklahoma City to practice law. He soon accepted the chairmanship of the University of Oklahoma (OU) English department but before starting the job resigned to accept a professorship in English at Epworth University (now Oklahoma City University). From 1913 to 1923 he was director of OU extension lectures. In 1923 he returned to Epworth to chair the English department until his retirement in 1931.

Scott wrote numerous articles, brochures, and books, including a textbook, Practical English (1908). Inducted into the Oklahoma Hall of Fame (1933), he was named Oklahoma City's Most Useful Citizen (1937) and received the University of Kansas Alumni Association Distinguished Service Award (1946). He also held an honorary doctorate of letters from Emporia College in Kansas. Scott died on February 6, 1949, in Oklahoma City and was interred in Highland Cemetery, in Iola, Kansas.

The following (as per The Chicago Manual of Style, 17th edition) is the preferred citation for articles:
Carolyn G. Hanneman, “Scott, Angelo Cyrus,” The Encyclopedia of Oklahoma History and Culture, https://www.okhistory.org/publications/enc/entry.php?entry=SC008.