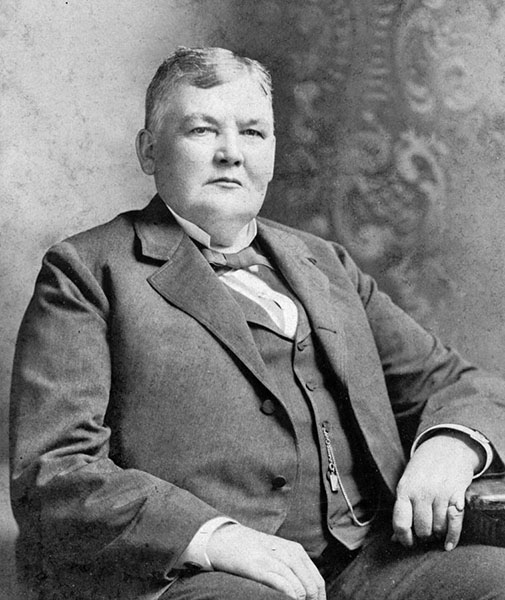 Born at Amherst Courthouse, Virginia, in 1832, Abraham Jefferson Seay, third governor of Oklahoma Territory, was the eldest son of Cam and Lucy J. Seay. The Seay family moved to Missouri in 1836, and young Seay attended public schools and Steelville Academy. His first real job was wielding a pick and shovel on the Missouri Pacific Railroad. Later he taught school and read law. In 1861 Seay moved to Cherryville, Missouri, to practice law. He enlisted in the U.S. Army at the beginning of the Civil War, serving in the Thirty-second Missouri Infantry at Vicksburg, Chattanooga, Lookout Mountain, Atlanta, and Savannah, and he rose to the rank of lieutenant colonel in command of a regiment. At war's end he entered Republican politics and served as Crawford County attorney and then as circuit judge of the Ninth Missouri District.

In reward for Seay's loyalty to the Republican Party, in 1890 Pres. Benjamin Harrison appointed him Associate Justice of the Supreme Court of Oklahoma Territory and circuit judge of the Third District, including Kingfisher, Canadian, and Beaver counties (at that time commonly called No Man's Land). Seay regularly traveled and held court throughout the entire district, a huge area including all of the unorganized territory from the 98th to the 100th Meridian and from Kansas to Greer County, Texas.

Seay took the oath of office as governor of Oklahoma Territory on February 1, 1892. During his administration he actively promoted the development of the territory, particularly the opening of lands for settlement. He supervised the opening of the Cheyenne and Arapaho district in April 1892, directing the organization of six counties, selecting county seats, and appointing county officials.

Seay's administration was noted for its attention to the territory's educational system. He advocated compulsory school attendance and favored a tax on liquor sales to raise money for public schools. Opponents criticized him for his philosophy of promoting the welfare of African Americans. He favored equal (but separate) educational opportunity for black children and local-option approval of school construction.

Seay led the way in promoting Oklahoma Territory to future investors and settlers. Because of his actions, the territory's business and agricultural potential was made known to thousands of world's fair attendees from the United States and many foreign nations. In 1892 he convinced the legislature to provide a fifteen-thousand-dollar appropriation to create an Oklahoma exhibit for the 1893 World's Columbian Exposition in Chicago. When Pres. Grover Cleveland opened the fair in May 1893, Seay and an Oklahoma delegation attended. Seay later noted that "Oklahoma was never better advertised" than by the world's fair exhibit, and the state's participation continued in subsequent world's fairs.

Abraham Jefferson Seay proved an able and dynamic governor. His tenure ended May 10, 1893. An unmarried man, he remained in Kingfisher and invested in a variety of businesses. Seay remained an active participant in Republican politics and a staunch supporter of the party's candidates in Oklahoma, Missouri, and in Washington, D.C. Plagued by numerous physical ailments after an accident in 1903, he lived on in ill health until his death in Long Beach, California, on December 22, 1915. The Seay Mansion at 605 Zellers Avenue in Kingfisher is open to the public.

The following (as per The Chicago Manual of Style, 17th edition) is the preferred citation for articles:
Dianna Everett, “Seay, Abraham Jefferson,” The Encyclopedia of Oklahoma History and Culture, https://www.okhistory.org/publications/enc/entry.php?entry=SE002.