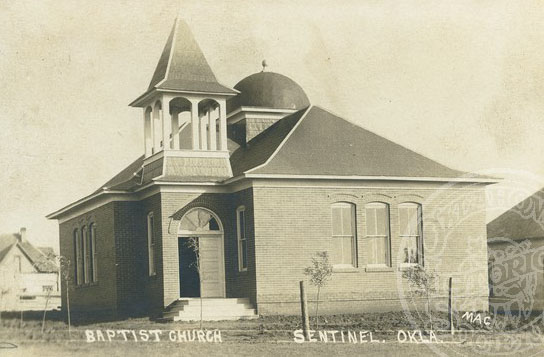 Located in southwestern Washita County, Sentinel lies at the intersection of State Highways 44 and 55. The town is primarily an agriculture-based community. The 1892 Cheyenne and Arapaho Opening brought non-Indians into the region. In 1898 R. B. Gore, a pioneer of Old Greer County, established a small general merchandise store in the area and applied for a post office. On March 6, 1899, the Post Office Department approved the application and designated the locale as Sentinel, Oklahoma Territory. The name originated from Cloud Chief's Herald-Sentinel newspaper. This store was approximately one mile east of the present town.

In 1901 the Kansas City, Mexico and Orient Railway, later bought by the Atchison, Topeka, and Santa Fe Railway, began purchasing rights-of-way and designating new townsites for a proposed railroad. The newly formed Orient Townsite Company chose the site of present Sentinel and received a donation of eighty acres from L. N. Whitmer. They named the new town Barton and filed a plat on September 23, 1901. The new residents asked Gore to relocate his store and post office to the new location. This caused confusion, as the town and post office had different names. In 1904 Will Hornbeck established the Sentinel News-Boy. Determined to correct the name problem, he started a petition to incorporate the town as Sentinel. In 1906 the voters approved this measure in an election. In August 1907 the town officially became Sentinel. At 1907 statehood it had 351 residents.

By 1908 the Orient had built tracks through the village. In 1910 the population stood at 857, climbing to 1,269 by 1930. In 1911 residents supported two banks, a newspaper, electricity and telephone service, four grocers, two hotels, four general stores, among many other businesses and professionals. In 1935 a Civilian Conservation Corps camp was located just west of Sentinel. The population held above one thousand until 1970 when it registered 984. In 1967 the Rocky school consolidated into Sentinel School District. In 1961 the chamber of commerce began hosting an annual, large July Fourth celebration. In 2000 the population stood at 859 and in 2010 at 901.

The following (as per The Chicago Manual of Style, 17th edition) is the preferred citation for articles:
Jolene Wolfenbarger, “Sentinel,” The Encyclopedia of Oklahoma History and Culture, https://www.okhistory.org/publications/enc/entry?entry=SE019.