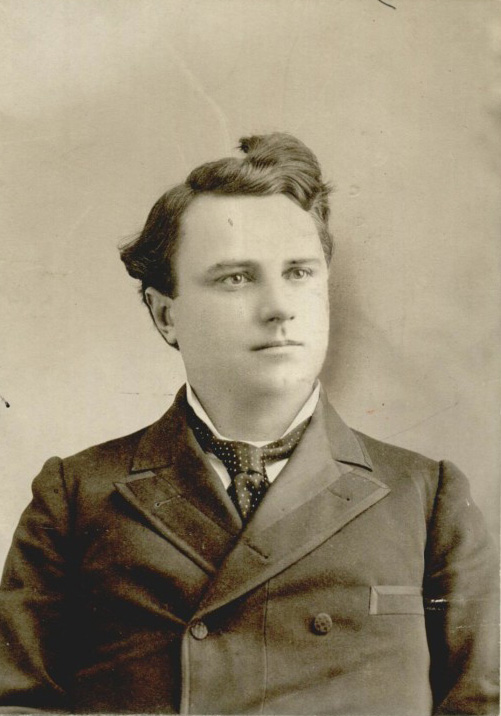 Attorney and Oklahoma City developer and civic leader John Wilford Shartel, son of David Elder and Mary Jane Wiley Shartel, was born on May 1, 1862, in Harmonsburg, Crawford County, Pennsylvania. After serving in the Civil War, David Shartel moved his family to Kansas, and the younger Shartel received his education in public schools. John Shartel obtained a teacher's certificate and began teaching at age seventeen. After graduating from the Kansas Agricultural College in 1884, he worked and studied in a Topeka, Kansas, law office. He passed the Kansas bar in 1886 and later formed a partnership with William P. Hackney and Henry E. Asp. On March 24, 1888, Shartel married Effie Woods, whom he had met in college. They had two sons, Burke and Kent. In the early 1890s the Shartels settled in Guthrie, the capital of Oklahoma Territory, where Shartel and Asp formed a partnership with James R. Cottingham. Serving as solicitors for the Atchison, Topeka and Santa Fe Railway in Oklahoma Territory, they also handled some of the numerous land claim disputes following the Land Run of 1889.

In 1898 the Shartels moved to Oklahoma City. There John Shartel served as general attorney for the Choctaw, Oklahoma and Gulf Railroad. He bought twenty acres, known as the Florence Addition, between Seventh and Tenth streets, bordered on the east and west by Broadway and Harvey streets. The lots quickly sold after he had platted the tract. In 1902 he joined Anton H. Classen to form the Metropolitan Railway Company (later the Oklahoma City Railway Company), which built transit lines from downtown Oklahoma City to outlying areas. Shartel served as the company's vice president and became president after Classen's death in 1922. As the transit business grew, Shartel had less time to spend at his Oklahoma City law firm. His dream of building the best interurban system in the Southwest stimulated the development of Oklahoma City to the north, south, and west of the downtown district and led to the growth of the nearby cities of Edmond, El Reno, Guthrie, Moore, and Norman.

Shartel, who was a Republican in politics, was a Presbyterian and a member of the Ancient Order of United Workmen, the Territorial Bar Association, and the Oklahoma City Chamber of Commerce. Always interested in history, he was writing a work on the Civil War when he died in Oklahoma City on April 13, 1926. Shartel was survived by his wife, two sons, two brothers, and four sisters, one of whom was Elva Shartel Ferguson, wife of Oklahoma territorial governor Thompson B. Ferguson. At the turn of the twenty-first century Shartel Avenue in Oklahoma City continued to serve as a reminder of one of the city's early developers.

The following (as per The Chicago Manual of Style, 17th edition) is the preferred citation for articles:
Linda D. Wilson, “Shartel, John Wilford,” The Encyclopedia of Oklahoma History and Culture, https://www.okhistory.org/publications/enc/entry.php?entry=SH009.