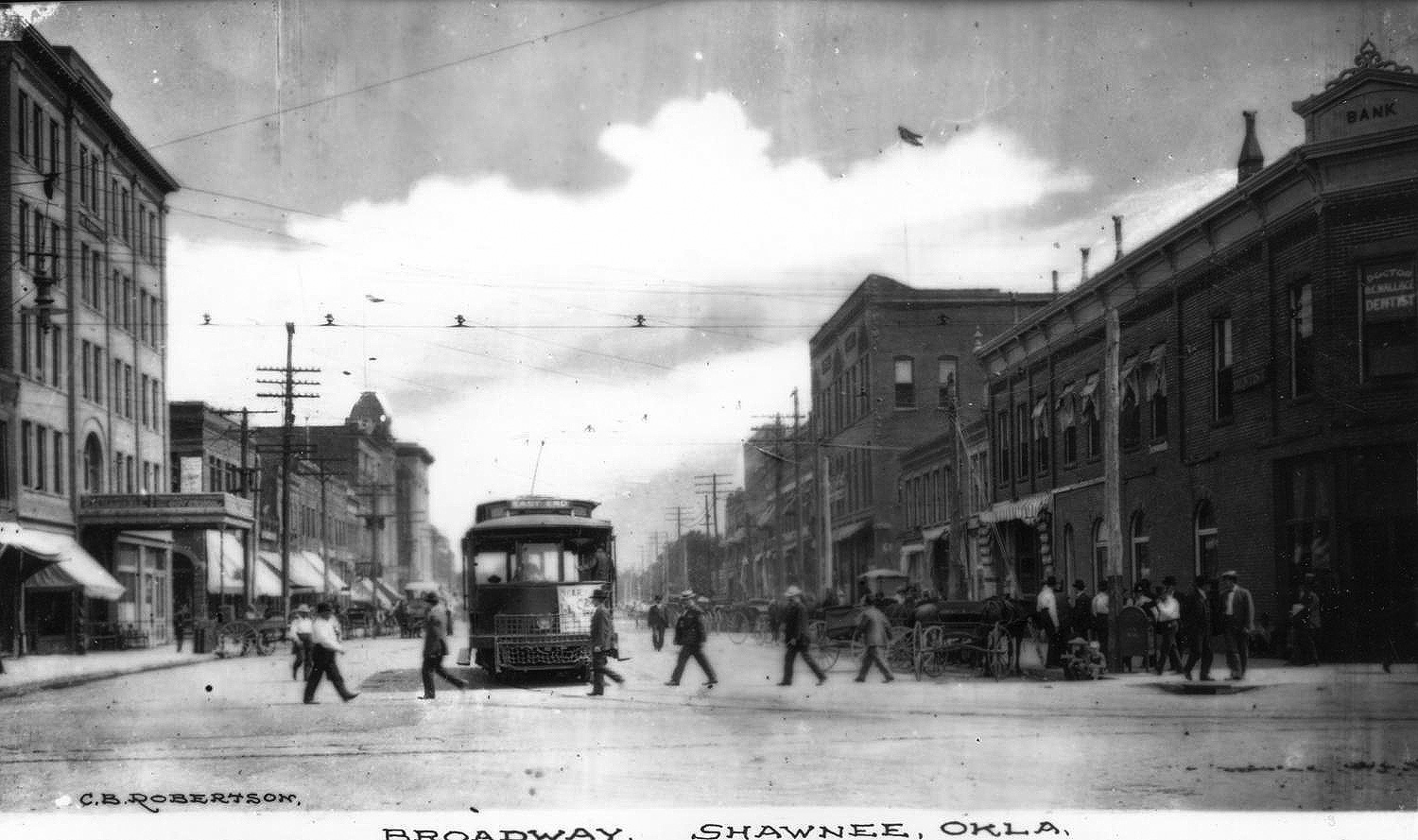 The county seat of Pottawatomie County, Shawnee is located along the North Canadian River and six miles southeast of the intersection of U.S. Highway 177 and Interstate 40. The Creek and Seminole area originally occupied the area that was designated as Pottawatomie County in 1892. After the Civil War those two nations ceded part of their land to the federal government, and the Sac and Fox, Citizen Band Potawatomi, Absentee Shawnee, and Kickapoo were removed to this region. On September 22, 1891, the area was opened to non-Indian settlers by a land run.

Among the thousands who made the run, four individuals—Etta B. Ray (who later married Henry G. Beard), John T. Beard (Henry Beard's brother), James T. Farrall, and Elijah A. Alley—crossed a line, later called Kickapoo Street, and each staked a quarter section in the proposed city of Brockway. Following an all-night discussion among early settlers who had their own suggestions for the town name, a compromise was reached to name the town Shawnee, after the American Indian tribe. Etta Ray and Henry Beard were married on November 9, 1891, and built the first residence, a log house (listed in the National Register of Historic Places, NR 83002121) in Shawnee.

On July 4, 1895, after months of negotiation, the Choctaw, Oklahoma and Gulf Railroad arrived at Kickapoo Street, thereafter fostering rapid growth in the new town. The population grew from 350 in 1894 to 2,500 in 1896. In 1903–04 the Atchison, Topeka and Santa Fe Railway and the Missouri, Kansas and Texas Railway extended rail service to Shawnee. Brothers John and Henry Beard and James Farrall gave land to the railroads as an inducement to build lines through the town. At the turn of the twenty-first century the Santa Fe Depot (NR 74001667) served as a museum for the Pottawatomie County Historical Society.

Early residents enjoyed baseball games, horse racing at a track west of the city, and vaudeville and opera performances at local establishments such as the Becker Theater. French actress Sarah Bernhardt appeared there in 1906. Good times were frequent at Benson Park, located between Shawnee and Tecumseh and reached by an interurban railway. Families spent leisurely Sunday afternoons at the park, listening to performances at the amphitheater, riding the roller coaster, roller-skating, or swimming in the pool called "The Plunge."

Local leaders induced two higher education institutions to locate in Shawnee. Oklahoma Baptist University held its first class in 1911. Its initial building, Shawnee Hall, was a gift from the citizens. The Benedictine Order of the Roman Catholic Church moved its school from Sacred Heart to Shawnee in 1915 and renamed it St. Gregory's College (St. Gregory's University, NR 75001572). St. Gregory's University closed in 2017. Shawnee is home of the Mabee-Gerrer Museum of Art.

Oklahoma notables who have resided in Shawnee include Oklahoma's twenty-fifth governor, Charles Bradford "Brad" Henry, astronaut Leroy Gordon Cooper, Jr., and Louise Funk Fluke, designer of Oklahoma's official flag. While homesteading in Kansas, physician Brewster Higley, who died in Shawnee on May 11, 1911, wrote a poem in 1873 that became the lyrics to the popular song "Home on the Range."

From the 1960s to the turn of the twenty-first century, Shawnee's economic base reoriented from agrarian to commercial, industrial, and service occupations. Shawnee had 28,692 residents in 2000 and 29,857 in 2010. They maintained a home rule charter with council-manager form of government.

Ernestine Gravley, "Fifty Years Ago in Shawnee and Pottawatomie County," The Chronicles of Oklahoma 31 (Winter 1953–54).

The following (as per The Chicago Manual of Style, 17th edition) is the preferred citation for articles:
Robert J. Barnard, “Shawnee,” The Encyclopedia of Oklahoma History and Culture, https://www.okhistory.org/publications/enc/entry.php?entry=SH012.