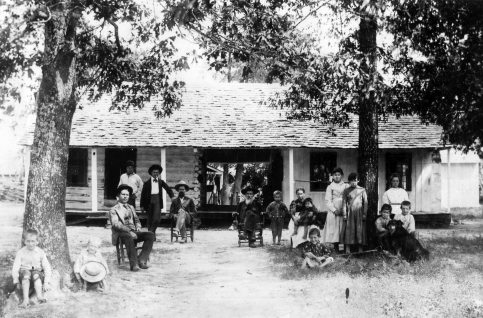 A principal settlement in the Choctaw Nation, Indian Territory, Skullyville (Scullyville) was situated three miles east of present Spiro in Le Flore County. The community developed around the Choctaw Indian agency, which was established in 1832. The Choctaw received annuity payments there, prompting traders to settle nearby. "Skullyville" was derived from iskuli, a Choctaw word for "money." However, the village was officially called Choctaw Agency until 1859 when the bureau was relocated. The Choctaw Agency designation was resumed in 1860 and changed to Oak Lodge in 1871.

Skullyville stood along the California Road and was a stop on the Butterfield Overland Mail route. Located east of town, the Butterfield station was the residence of Choctaw governor Tandy Walker. Known as the Choctaw Agency–Walker Station, it is listed in the National Register of Historic Places (NR 72001074). Two Methodist boarding schools, the New Hope School for Girls and the Fort Coffee Academy for Boys, were located nearby. Skullyville served temporarily as the Choctaw national capital. The Skullyville Constitution was drafted there in 1857.

The town declined after the Civil War, although a Freedmen's school opened there in the 1870s. The Kansas City Southern Railway bypassed Skullyville in 1895. Local businessmen moved to Spiro in order to be close to a depot. The Oak Lodge post office closed in 1917. Little remains of Skullyville except its cemetery.

The following (as per The Chicago Manual of Style, 17th edition) is the preferred citation for articles:
Jon D. May, “Skullyville,” The Encyclopedia of Oklahoma History and Culture, https://www.okhistory.org/publications/enc/entry.php?entry=SK005.