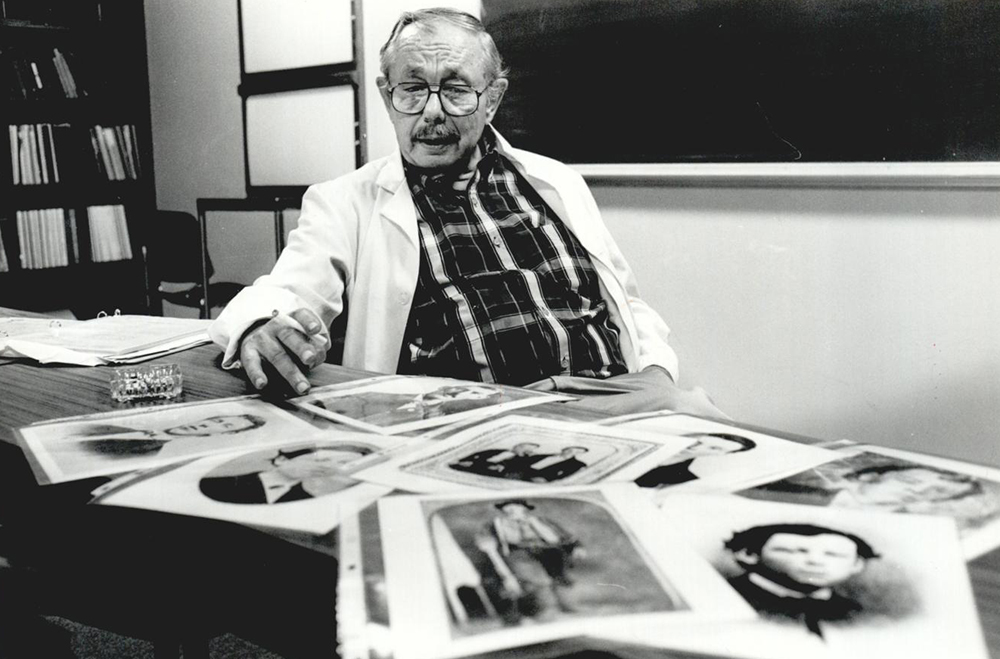 Born at Ralls, Texas, on January 7, 1928, Clyde Snow learned early about the workings of the human body from his physician father. Later in life Snow garnered an international reputation as a forensic anthropologist, working on cases that ranged from mass murders to the John F. Kennedy assassination. When he was a sophomore in high school, Snow's parents sent him to New Mexico Military Institute in Roswell. Although accepted to Harvard, he started his collegiate career at Southern Methodist University and earned a bachelor's degree from Eastern New Mexico University. In 1955 he earned a master's degree in zoology at Texas Tech University. Also in 1955, he began a three-year stint in the U.S. Air Force as a clinical laboratory officer. Returning to civilian life, he studied archaeology at the University of Arizona. He soon switched to physical anthropology and traveled to Puerto Rico to study rhesus monkeys. In 1960 Snow took a job with the Federal Aviation Administration (FAA) and worked on aviation safety research at the newly built Civil Aeromedical Institute (CAMI) in Oklahoma City. While working for the FAA, he finished his Arizona doctoral work. While he was carrying out studies for the FAA and helping to develop a computer program to investigate airplane crashes, such as the 1979 American Airlines 191 in Chicago, Snow's reputation in forensics grew.

In numerous cases he helped the Oklahoma authorities identify unknown skeletal remains. Many times his work led to the filing of charges against the alleged murderer. Nationally, Snow assisted identifying victims of serial killer John Wayne Gacy and Seattle's Green River killer. Several of Snow's investigations have dealt with mass murders. In Oklahoma he helped identify victims of the Oklahoma City Bombing. In countries such as Argentina, the Philippines, El Salvador, Bosnia, Bolivia, Iraq, Peru, and Croatia, he has examined mass graves that accompanied political turmoil, not only identifying victims but building criminal cases against leaders and governments that have committed the atrocities.

He has also used his skills for historical analysis. With projects such as authenticating Billy the Kid photographs, studying the remains of soldiers at Little Bighorn, identifying the Butch Cassidy and the Sundance Kid grave in Bolivia, working with the Tulsa Race Riot Commission, and analyzing Battle of the Washita remains, Snow has debunked myths and revealed much that is left out of the written historical record. In 1985, as part of an international forensic team, Snow helped in the positive identification of Josef Mengele, a Nazi fugitive that operated Auschwitz, a German death camp that killed thousands of people, mainly Jews. After retiring from the FAA in 1980, Snow worked as a consultant for the University of Oklahoma. He lived in Norman at the beginning of the twenty-first century. Clyde Snow died on May 16, 2014.

The following (as per The Chicago Manual of Style, 17th edition) is the preferred citation for articles:
Larry O'Dell, “Snow, Clyde,” The Encyclopedia of Oklahoma History and Culture, https://www.okhistory.org/publications/enc/entry.php?entry=SN001.