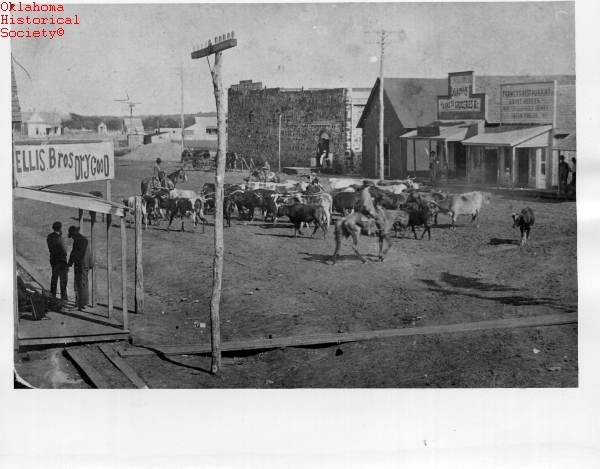 Located in southwestern Choctaw County on U.S. Highway 70, Soper is situated eleven miles west of Hugo. In 1902 dwellings and businesses began to spring up in the area when the Arkansas and Choctaw Railway (A&C) built a line through present southern Choctaw County. The young community was named for Pliny L. Soper, an attorney for the A&C. The post office was established on April 12, 1903, with Malcom E. Walker as the first postmaster. That same year Walker built the first hotel and bought what was known as the Snippee Store. The store building soon housed a general mercantile, the post office, the Hicks Confectionery, operated by Walker's brother-in-law, L. W. Hicks, and a telephone office, operated by Walker's future wife, Lizzie Lee.

By 1904 Soper's first religious institution, the Methodist Church, was organized, as was its first school, a one-room affair taught by a Professor Amos from Athens, Arkansas. In 1906 the Bank of Soper was established with Thomas E. Oakes as president and J. T. Jeter as cashier. Capital assets were said to have been twenty-five thousand dollars. The bank building stood on the northeast corner of Main Street and U.S. Highway 70. In 1918 another bank was built on the west side of Main Street about halfway between Highway 70 and Paris Avenue. Both banks operated until 1923. After the Bank of Soper closed, the building housed several other businesses, including a dance hall, a cafe, several bars, a movie theater, and a series of grocery stores. In 1981 Jack Beavers and his wife operated the Soper Grocery in the seventy-five-year-old building, when it was destroyed by a fire.

By January 1, 1907, Walter L. Garner had founded the first newspaper, the Soper Herald. In 1914 Garner sold the newspaper to Roy E. Crossett, who named it the Soper Democrat. After thirty-three years Crossett ceased publishing the paper and sold the equipment to W. E. Schooler of Hugo.

At 1907 statehood Soper had 296 residents. By 1920 the population had reached 538. The town supported two doctors, two banks, four churches, a newspaper, and a new three-room school and had water and electric utilities. Agriculture provided the economic basis for the community, cotton being the main crop. At its economic peak the town had three restaurants, three cotton gins, two barbershops, and two hotels.

The 1940 census recorded 481 residents, a number that declined to 322 in 1970. In 1960 a tornado destroyed most of the downtown area's brick buildings. By 1990 the cotton fields had been converted to pasture land. The town had only one industry, a manufacturer of hay-baling equipment, but supported a grocery store, two convenience stores, a service station, two cafés, four churches, and two beauty shops. According to the 2000 census 300 people lived in Soper, and the 2010 census counted 261.

The following (as per The Chicago Manual of Style, 17th edition) is the preferred citation for articles:
Altha Alder, “Soper,” The Encyclopedia of Oklahoma History and Culture, https://www.okhistory.org/publications/enc/entry.php?entry=SO011.