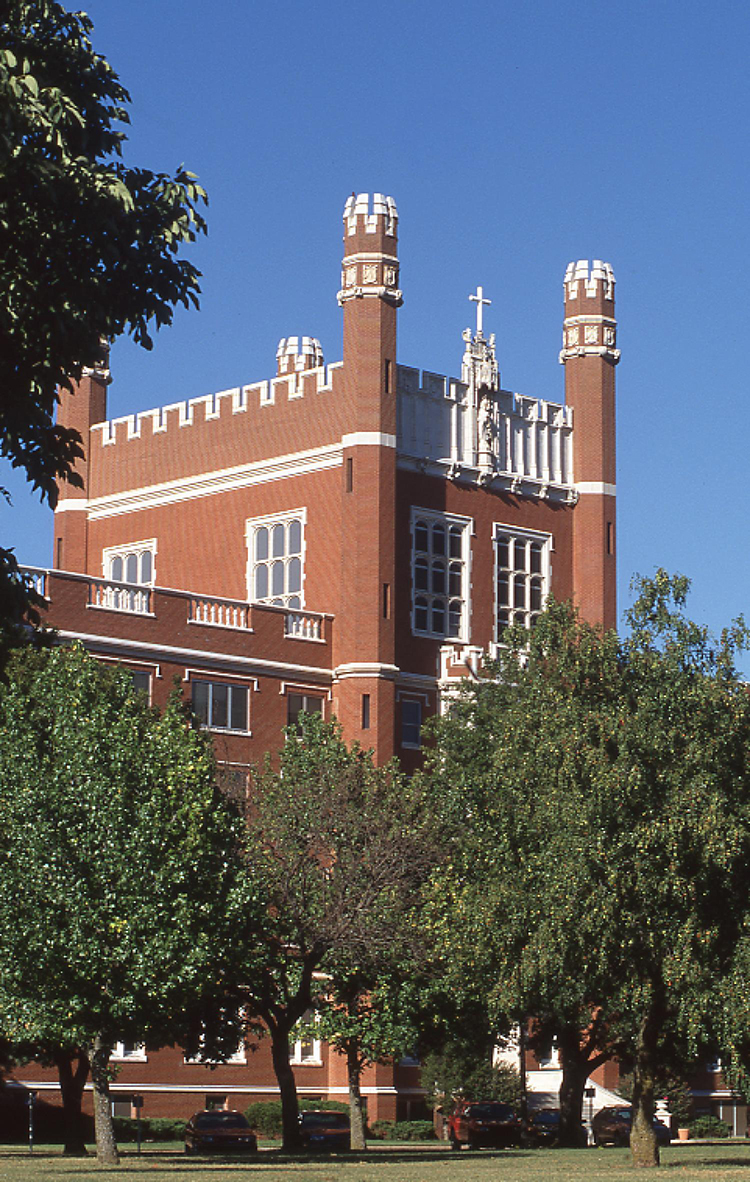 Located in Shawnee, Oklahoma, St. Gregory's University is a Roman Catholic, four-year, liberal arts college sponsored by the Benedictine monks of St. Gregory's Abbey. The school traces its roots back to 1875 when monks from the French Abbey of La Pierre-qui-Vire came to Indian Territory (I.T.) at the request of the Citizen Potawatomi Nation. Near the present southern border of Pottawatomie County, the monks established Sacred Heart Mission. In 1877 they opened schools, conducted by the Sisters of Mercy, for boys and girls. During the next year the monks initiated advanced studies in philosophy and theology, giving St. Gregory's its claim as the oldest institution of higher education in Oklahoma. As the number of settlers to I.T. increased, the monks formally established Sacred Heart College in 1883.

On January 15, 1901, a devastating fire swept through Sacred Heart, destroying almost every building on campus. The monks rebuilt the monastery and college on the same site but simultaneously began to search for a new location. Because of its civic cooperation and potential for growth, Shawnee became the new home for the monastery and college. Construction on the imposing, five-story, Tudor Gothic–style main structure began in 1913. Two years later it opened for classes. Although incorporated as the Catholic University of Oklahoma, the school was commonly known as St. Gregory's after its dedication under the patronage of St. Gregory the Great. St. Gregory's offered courses ranging from the seventh grade through the fourth year of college, but the boys' high school and first two years of college eventually became its primary focus.

By the 1960s the difficulty of maintaining both the high school and college prompted major changes. The high school closed in 1965, and St. Gregory's became a coeducational junior college. The following decades brought significant additions to the campus, including the Mabee-Gerrer Museum of Art, the Sarkeys Performing Arts Center, the offices of the National Institute on Developmental Delays, and the Patricia Flanagan-Rockwood Center, which models the school's emphasis on technology.

In 1997 St. Gregory's College returned to the vision of its founders and received accreditation to grant bachelor's degrees. To signal this new status the school changed its name to St. Gregory's University. At the turn of the twenty-first century St. Gregory's University, with an enrollment of approximately 750, offered bachelor's degree programs at its Shawnee campus and a degree-completion program (Adults Completing Education) and a theological-studies program known as the Pastoral Studies Institute at various sites across Oklahoma.

Early in the twenty-first century the university's financial resources dwindled. The problem was amplified in 2011 by the effects of a 5.8 magnitude earthquake that damaged Benedictine Hall. Despite several million dollars in donations that enabled the partial reconstruction of the building's towers, the school's overall financial position worsened. The board of directors closed the institution at the end of the fall 2017 semester, and after bankruptcy proceedings the campus was sold to Hobby Lobby in 2018.

The following (as per The Chicago Manual of Style, 17th edition) is the preferred citation for articles:
Nicholas Ast, “St. Gregory's University,” The Encyclopedia of Oklahoma History and Culture, https://www.okhistory.org/publications/enc/entry.php?entry=ST006.