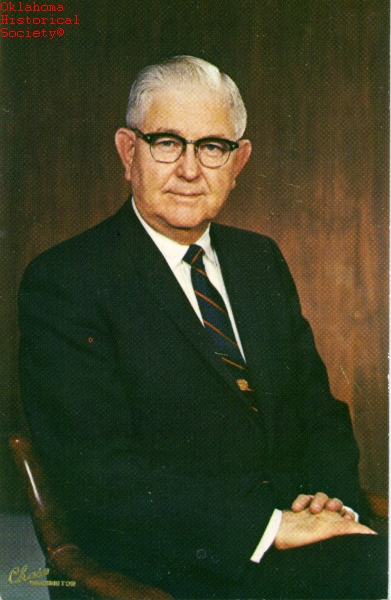 U.S. Rep. Thomas J. Steed once commented that he came from "tenant farmers, poor white trash," but he went on to serve longer than any other Oklahoman in the U.S. Congress. He was born on a farm near Rising Star in Eastland County, Texas, on March 2, 1904. When he was four, his family moved to near Konawa, Oklahoma. There he attended public schools, finishing his formal education after only one semester of high school.

While still a teenager, he began work for the Ada Evening News. He later worked for a number of other Oklahoma newspapers, including the Daily Oklahoman. Beginning in 1935 he served as an assistant to three of Oklahoma's U.S. congressmen, Percy L. Gassaway, Robert Potter Hill, and Gomer Smith. In 1938 he returned to Oklahoma and became managing editor of the Shawnee News-Star. The newspaperman married Hazel Bennett in 1923, and the couple had two children, Roger and Richard. The former became a Marine second lieutenant and fighter pilot and was killed in China in 1947.

On October 29, 1942, Tom Steed enlisted as a private in the U.S. Army Anti-aircraft Artillery. The military released him from active duty in May 1944 with the rank of second lieutenant. He then joined the Office of War Information on July 1, 1944. He eventually served with the information division in the India-Burma-China Theater until December 1945. When he returned to Oklahoma, he operated a car agency.

In 1948 Steed, a Democrat, was elected to the U.S. House of Representatives from Oklahoma's Fourth District, and he served in office from January 3, 1949, to January 3, 1981. While in Congress, he sat on the Education and Labor, Public Works, Appropriations, and Small Business committees. He briefly chaired this last committee during the Ninety-fourth Congress. He was also chair of the Subcommittee on the Treasury, Postal Service, and General Government and of the Subcommittee on Taxation and Oil Imports.

Steed's legislative interests were in education and library services, soil conservation, rural electrification, and federal paperwork reduction. While on the Small Business Committee, he conducted hearings on price wars affecting the dairy and retail petroleum industries. In 1954 he cosponsored the Upstream Conservation Act, and through this bill Oklahoma eventually ranked second with the amount of land protected by upstream conservation. He also worked on legislation for numerous water projects, and he joined with Sen. Robert S. Kerr to bring about the Arkansas River Navigation System. He cosponsored the 1956 Library Services Act, which established the bookmobile system. That same year he also authored an amendment to the Interstate Highway Act. In 1968 he helped bring the Postal Service Institute to Norman, and he later assisted in appropriating money to create the education center at Rose State College and the Gordon Cooper Vocational Education School in Shawnee. In the 1970s he served on the Federal Paperwork Commission, which sought to develop methods for reducing the amount of paperwork in the federal government.

Steed was not a candidate for reelection in 1980, and with retirement from Congress he returned to Shawnee. In early 1983 he suffered injuries in a car accident. In May he was diagnosed with cancer, and he died on June 8, 1983, in Shawnee. He was interred at Resthaven Cemetery in Shawnee.

The following (as per The Chicago Manual of Style, 17th edition) is the preferred citation for articles:
Todd J. Kosmerick, “Steed, Thomas Jefferson,” The Encyclopedia of Oklahoma History and Culture, https://www.okhistory.org/publications/enc/entry.php?entry=ST028.