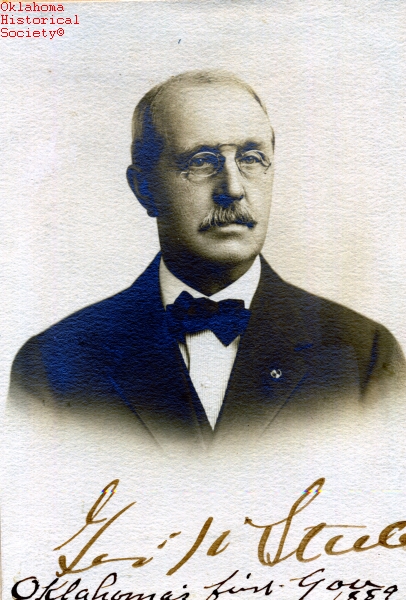 Oklahoma's first territorial governor was born on December 13, 1839, near Connersville, in Fayette County, Indiana. Steele grew up in Marion, Indiana, and he attended public schools there. After attending Ohio Wesleyan University, he read law and, after being admitted to the Ohio bar, practiced in Hartford City, Indiana. At the beginning of the Civil War, Steele volunteered, serving as an officer in two Indiana infantry regiments of the U.S. Army. He saw action at Chattanooga, Missionary Ridge, and Atlanta, and in Sherman's march through Georgia to Savannah. After the war Steele ran an unsuccessful business in Marion and later reentered the military for service in the West. In 1866 he married Marietta E. Swayzee, and the union produced a son and a daughter. A Republican, from 1881 to 1889 Steele represented Indiana in the U.S. House of Representatives. Pres. Benjamin Harrison appointed him to the post of governor of Oklahoma Territory in 1890, and he took office on May 22 of that year.

Steele's administration faced the task of creating the executive, legislative, and judicial branches of territorial government, developing policies and institutions, and filling positions. The governor quickly laid out county boundaries, selected county seats, named county officials, and set up mechanisms for local government. He also directed the establishment of a territorial higher education system, including the University of Oklahoma, Oklahoma A&M College (now Oklahoma State University), and Territorial Normal School (now the University of Central Oklahoma) in Norman, Stillwater, and Edmond, respectively. However, Steele had limited success in the realm of public education, and the legislature failed to pass a common school bill until late in his administration.

Two other issues faced by Steele involved the location of the territorial capital and the settlement of the territory's public domain lands. Factions developed in a battle for the seat of government, which was then located at Guthrie. Believing that the selection of a permanent site should await further territorial development, the governor vetoed or avoided signing legislative measures that would place the capital in Oklahoma City or Kingfisher.

A major issue, one with important future consequences, involved settling tribal claims to land in Oklahoma Territory and making the land available for occupation by non-Indians. During Steele's administration federal treaties resolved the claims of the Sac and Fox, Shawnee, and Potawatomi tribes. These made 868,414 acres available to be opened by land run on September 22, 1891. One of Steele's last acts was to divide the newly opened area into two counties, A and B, later named Lincoln and Pottawatomie.

The following (as per The Chicago Manual of Style, 17th edition) is the preferred citation for articles:
Dianna Everett, “Steele, George Washington,” The Encyclopedia of Oklahoma History and Culture, https://www.okhistory.org/publications/enc/entry.php?entry=ST029.