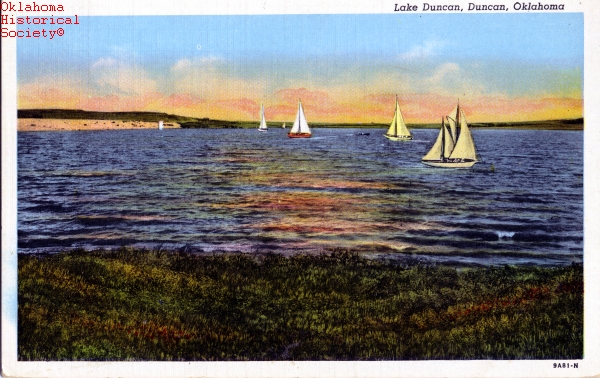 Located in south-central Oklahoma Stephens County is bordered by Comanche, Grady, and Garvin counties on the north, Garvin and Carter counties on the east, Jefferson County on the south, and Comanche and Cotton counties on the west. Named for Texas politician John H. Stephens, the county was organized at 1907 statehood from part of the Chickasaw Nation, Indian Territory, and part of Comanche County, Oklahoma Territory. Comprised of 891.12 square miles of land and water, Stephens County lies within the Red Bed Plains physiographic region. The county has no major river but is drained by numerous creeks. The Wildhorse Creek in eastern Stephens County drains into the Washita River, and Beaver Creek in the western part of the county flows into the Red River. In 2010 the incorporated towns included Bray, Central High, Comanche, Empire City, Loco, Marlow, Velma, and Duncan, the county seat.

According to an archaeological survey report published in 1983, Stephens County has forty-eight known archaeological sites. Of these sites thirty-one were found during federally funded surveys. None have been tested or excavated. However, three were identified as important for additional investigation. They include the Central School and Smith sites, both representative of the Plains Village period, and the Funk site, of an uncertain prehistoric period with a preserved camp with habitation features.

Present Oklahoma was situated in the area known as the Louisiana Territory, which was purchased from France in 1803. After the United States acquired this region, American explorers, traders, and military personnel came through the area and wrote accounts of their travels. In 1834 the Dodge-Leavenworth Expedition left Fort Gibson and passed through present Stephens County to treat with the Plains Indians. From Fort Arbuckle Capt. Randolph B. Marcy passed through the future county in 1852 when he led an expedition to locate the source of the Red River.

In 1818 the Quapaw ceded to the United States the area between the Canadian and Red rivers. This region became home to the Choctaw and Chickasaw, who were removed from southeastern United States in the 1820s and 1830s. Forts Washita and Arbuckle were established in 1842 and 1850, respectively, to provide protection to the Chickasaw from marauding Plains tribes and unscrupulous whites. Although no significant Civil War battles occurred in the Chickasaw Nation, the ravages of war destroyed property and livestock. Because the Chickasaws and others of the Five Tribes supported the Confederacy, they lost their western lands as part of the conditions of the Reconstruction Treaties negotiated in 1866. The area west of the Choctaw and Chickasaw nations known as the Leased District was ceded to the United States. Reservations were established in the Leased District for the Kiowa, Comanche, and Apache in 1867, the Wichita and Caddo in 1868, and the Cheyenne and Arapaho in 1869.

Following the end of the Civil War (1861–64), the Chisholm Trail, which passed through Stephens County, developed as a route for Texas cattlemen to drive their cattle to markets in Kansas. The Old Duncan Store, established circa 1867 by Silas Fitzpatrick, was situated along the Chisholm Trail. Fitzpatrick sold the store to William Duncan, for whom the county seat is named.

At 1907 statehood approximately two-thirds of Stephens County was formed from part of Pickens County, Chickasaw Nation, and the western one-third was taken from Comanche County. Duncan was designated as the county seat. The county commissioners originally had offices in rented space until the first courthouse was constructed. The Manhattan Construction Company started construction on the facility in 1921. Designed by Oklahoma City architect Jewell Hicks, the building had a combination of Second Renaissance Revival and Neoclassical designs. The present courthouse was constructed in 1967.

In the late 1910s oil and gas drilling activity proliferated in Stephens County. Empire City became an oil-boom town overnight with at estimated population of three thousand. When drilling occurred in the eastern part of Stephens County, Loco served as a service center for the oil companies. In 1918 the O Nah Dy Well in Duncan was the first to produce oil of commercial value. Soon support businesses to the oil and gas industry were established. In the 1920s Erle P. Halliburton founded the Halliburton Oil Well Cementing Company in Duncan. The firm continued as a major employer at the turn of the twenty-first century.

The waterways and trails formed the earliest transportation routes. Early roads included the Fort Sill to Fort Towson military road. At the end of the Civil War the Chisholm Trail developed to serve Texas cattlemen who drove large cattle herds to Kansas markets. In 1892 the Chicago, Rock Island and Pacific Railway constructed a line from Minco (in present Grady County) passing through Marlow, Duncan, and Comanche to the Oklahoma-Texas border. U.S. Highway 81 runs north and south through Stephens County, essentially following the route of the former Chisholm Trail. State Highways 7, 29, and 53 pass through the county in an east-west direction. At the turn of the twenty-first century two private airports and Halliburton Field, south of Duncan, served the county.

During the Great Depression Works Progress Administration (WPA) projects put the unemployed back to work. Among the projects were construction of the Marlow National Guard Armory (NR 94000282) and the Duncan National Guard Armory (NR 96001490). Both have been listed in the National Register of Historic Places. Other WPA projects included repair and construction of schoolhouses as well as improvement of roads and water and sanitation systems. The Civilian Conservation Corps, another depression-era federal agency, placed young men in camps to work on Department of Interior and Department of Agriculture projects. One such camp, constructed between July and September 1935, existed in Duncan at the intersection of Cypress and Fifteenth streets. Men at this camp worked on contouring the county's fields to control soil erosion.

At the turn of the twenty-first century outdoor enthusiasts enjoyed Lake Humphreys, Clear Creek Lake, Duncan Lake, Comanche Lake, and Waurika Lake. The Stephens County Historical Museum in Duncan offered displays interpreting local history. In addition to the two National Guard armories, Stephens County had eight other listings in the National Register of Historic Places. They were the Montgomery-Linam House (NR 83002128) in Marlow as well as the Brittain-Garvin House (NR 00001039), the H. C. Chrislip House (NR 93000677), the Duncan Public Library (NR 99001427), the W. T. Foreman House (NR 03000512), the Johnson Hotel and Boarding House (NR 86001098), the Patterson Hospital (NR 95001417), and the Louis B. Simmons House (NR 01000207), all of which are in Duncan. The Duncan Banner, the Comanche Times, and the Marlow Review newspapers informed county residents.

The following (as per The Chicago Manual of Style, 17th edition) is the preferred citation for articles:
Linda D. Wilson, “Stephens County,” The Encyclopedia of Oklahoma History and Culture, https://www.okhistory.org/publications/enc/entry.php?entry=ST030.