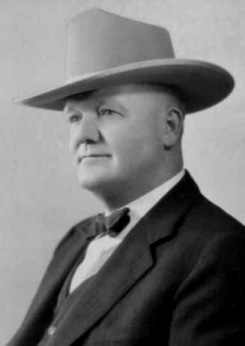 U.S. Rep. Paul Stewart was born in Clarksville, Johnson County, Arkansas, on February 27, 1892, the son of Charles Jackson and Mary Ellen Overbey Stewart. He moved with his parents to Poteau, Indian Territory, in 1894 and to Red River County, Choctaw Nation, Indian Territory (now a part of McCurtain County) in 1897. Charles Stewart was a missionary among the Choctaw Indians. At age ten Paul Stewart became a rural mail carrier, and at thirteen he entered the mercantile business at Spencerville, Indian Territory. He was educated at home before attending school at age fourteen, and he finished four years later. In 1910 he moved his business to Haworth, Oklahoma, and he continued its operation until 1919.

In 1915 Stewart was admitted to the Oklahoma bar and began practicing law. From 1914 to 1922 he was the postmaster of Haworth. He relocated to Antlers in 1929 and became the editor, owner, and publisher of the weekly newspaper the Antlers American. During this time he was also engaged in the ranching, farming, and hotel businesses. He owned and operated the Paul Stewart Ranch Farm near Antlers.

On August 7, 1912, Stewart married Berta Keen, the daughter of Young and Eva Byrum Keen. The couple had two daughters, Elma and Martha, before they divorced. He remarried on June 9, 1938, to Irene Almond Smith. They had no children. Stewart's second wife was the daughter of Henry and Mary Lottie Almond. Her family had moved to Indian Territory in 1886.

In 1922 voters elected Stewart as a Democrat to the Oklahoma House of Representatives, and he served through 1926. In 1923 he was a member of a committee investigating banks. In 1926 he saw election to the Oklahoma Senate, and he held a seat until 1942. He served as Democratic floor leader in 1929–30, president pro tempore in 1933–34, and acting governor in 1933. For a time he chaired the roads and highways committee. In 1941 he was a member of a select committee to investigate communist infiltration in the state, especially the universities. The University of Oklahoma was a prime target, but he eventually admitted that the committee had been unable to uncover even one communist there.

In the 1942 Democratic primary election he defeated incumbent Wilburn Cartwright for nomination to the Third District seat in the U.S. House of Representatives. After winning the general election, Stewart resigned his state position. He served in Congress from January 3, 1943, to January 3, 1947. He sat on the Committee on Military Affairs.

Deciding not to run for reelection in 1946, he returned to Antlers and resumed his newspaper publishing business. On November 13, 1950, he was overcome by smoke while fighting a grass fire, and he died later that day. Paul Stewart was interred in City Cemetery.

The following (as per The Chicago Manual of Style, 17th edition) is the preferred citation for articles:
Todd J. Kosmerick, “Stewart, Paul,” The Encyclopedia of Oklahoma History and Culture, https://www.okhistory.org/publications/enc/entry.php?entry=ST033.