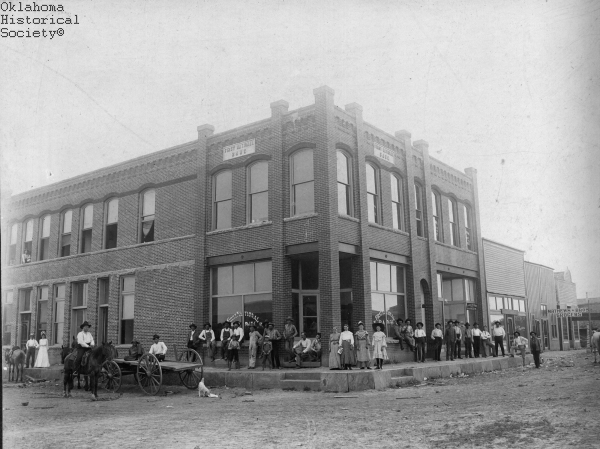 The town of Stonewall is located in Pontotoc County and is situated north of State Highway 3, thirteen miles southeast of Ada. Stonewall's history began before the Civil War when Robert L. Cochran, a Georgian, built a trading post south of Clear Boggy Creek. The site was designated as Pontotoc, and a post office opened there in 1858. Cochran moved his store to the north side of the stream around 1868. The settlement that developed there was named in honor of Confederate Gen. Thomas J. "Stonewall" Jackson.

Stonewall was home to the Chickasaw National Academy from 1856 until 1880. The Collins Institute, a manual training school for Chickasaw boys, was constructed southwest of town in 1885. By 1875 Stonewall had a post office (established in December 1874), a grocery and dry goods store, a stagecoach station, a hotel, and a cotton gin. Rapid growth came after the Oklahoma City, Ada and Atoka Railway bypassed the town in 1903. To access the railroad, Stonewall was moved some three miles east to its present location. Many residents did not want to abandon the former site, because it was historically significant as the seat of Pontotoc County in the Chickasaw Nation, Indian Territory.

The relocation of the post office made "New" Stonewall official. Businesses moved there, and the population mushroomed. By 1907 Stonewall had 530 residents, a host of commercial enterprises, the Stonewall Weekly News, four churches, and a school. Those who remained in "Old" Stonewall renamed it Frisco, mistakenly believing that a branch of the St. Louis and San Francisco Railway would serve the town. In 1905 the Oklahoma Central Railway built an unsuccessful line through Frisco. Presently only foundations and cemetery monuments mark Stonewall's original site.

By 1930 Stonewall's population was 478. Passenger and freight trains arrived daily in town. Four cotton gins were in operation, and diesel engines near the train station generated electricity to produce ice for railroad refrigerator cars and power and ice for townspeople. Commercial buses transported passengers over dirt roads to nearby towns.

A 1930s oil boom kept Stonewall out of the Great Depression. However, petroleum polluted Clear Boggy Creek, forcing residents to dig water wells. In 1930 State Highway 3 was constructed through town. Trucks and cars competed with trains for business and caused the railroad's demise. Charles Arthur "Pretty Boy" Floyd robbed the Stonewall Bank in 1932. Insects, drought, and cotton and corn overproduction slowed Stonewall's agriculturally based economy. The town's population peaked at 761 in 1940 and for thirty years hovered around six hundred.

Stonewall's commerce declined after State Highway 3 was rerouted in 1996. In 2000, 465 people lived there. In 2003 many residents worked in Ada, although a bank, a post office, and a few businesses remained. Five churches conducted regular services, and a nursing home cared for approximately fifty residents. With an enrollment of 350 students, Stonewall School remained the hub of the community. The 2010 census found 470 residents.

The following (as per The Chicago Manual of Style, 17th edition) is the preferred citation for articles:
Martha E. Rhynes, “Stonewall,” The Encyclopedia of Oklahoma History and Culture, https://www.okhistory.org/publications/enc/entry.php?entry=ST042.