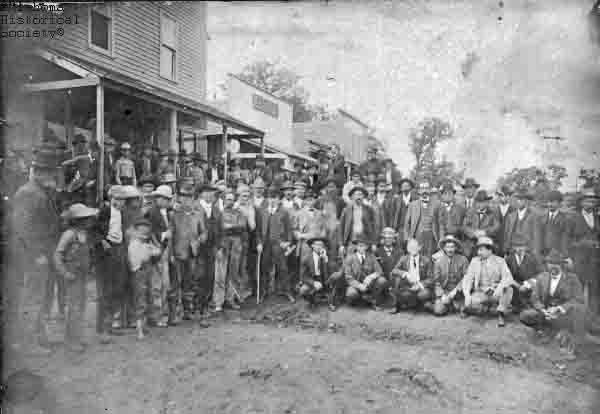 Located in southeastern Hughes County, Stuart is situated on State Highway 31A and on U.S. Highway 270, fifteen miles west of McAlester. Originally, a settlement known as Hoyuby, in the Choctaw Nation, Indian Territory, existed at this site. Named for a Choctaw allottee, Hoyuby post office was designated on June 23, 1892. John H. Elliott served as the first postmaster. A community developed after 1895 when the Choctaw, Oklahoma and Gulf Railroad (later the Chicago, Rock Island and Pacific Railway) built a line through Stuart, connecting McAlester and Oklahoma City. Because Hoyuby had various spellings, the post office was renamed Stuart, in honor of Judge Charles Bingley Stuart of McAlester, on April 14, 1896.

In June 1904 Samuel and Lela Wooley provided the land for the townsite. At about the same time Berry Alexander "B. A." and Mary Youngblood Nunn came from Texas to Stuart and built a two-story, wood-frame hotel that became known as the Stuart Hotel (listed in the National Register of Historic Places, NR 82001496). By 1909 Stuart citizens had established Baptist, Christian, and Methodist churches. The Bank of Stuart, five general stores, two blacksmith shops, two lumberyards, a cotton gin, and several liveries served the surrounding agricultural area. Cotton was the main cash crop. Royal C. Stuart, Judge Stuart's son, started his banking career as a cashier at the Bank of Stuart. Nine years later the economy supported a second bank, the Stuart Chronicle newspaper, a gristmill, and the Choctaw Cotton Oil Company. Other early newspapers included the Stuart Educator, the Stuart Enterprise, and the Stuart Star. In the 1930s Stuart served as a watering station for the railroad. In addition, the town had a blacksmith, two cotton gins, and the Texas Pipe Line Company. By the 1940s and 1950s the banks had closed, and citizens traveled to Holdenville or McAlester for their banking needs. Grocery stores and gasoline stations continued to operate in Stuart.

The first federal census reported for Stuart indicated a population of 535 in 1930. As the Great Depression worsened in the 1930s, many farmers, unable to pay their taxes, lost their farms and moved to other promising destinations. Thus, the population declined to 340 in 1940 and continued a downward spiral to 271 in 1960. In 1970 the town had 294 citizens. Since 1970, the number has decreased each decade, reaching 235 in 1980, 228 in 1990, and 220 in 2000. Of Stuart's employed residents, 93.6 percent commuted to jobs in McAlester, Holdenville, or other towns. On May 9, 1992, the townspeople dedicated a war memorial to honor Stuart citizens who have served in the armed forces. At the turn of the twenty-first century Stuart continued as an incorporated town with a school offering prekindergarten through grade twelve. Citizens attended the Baptist, Church of Christ, Methodist, and Nazarene churches. The 2010 population was 180.

The following (as per The Chicago Manual of Style, 17th edition) is the preferred citation for articles:
Linda D. Wilson, “Stuart,” The Encyclopedia of Oklahoma History and Culture, https://www.okhistory.org/publications/enc/entry.php?entry=ST054.