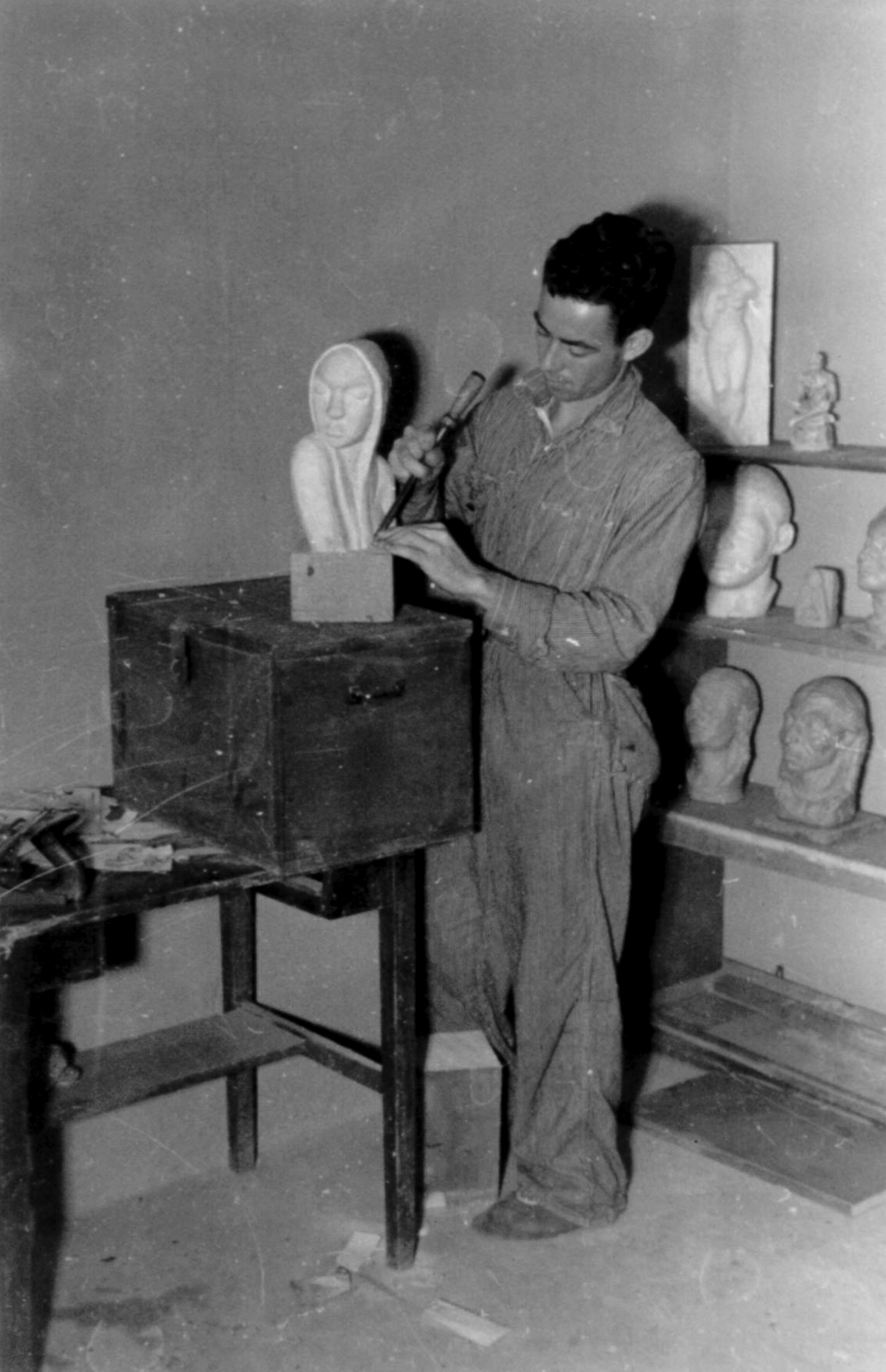 A sculptor, Willard Stone, of one-quarter Cherokee ancestry, was born on February 29, 1916, at Oktaha, near Muskogee, Oklahoma, and educated in Oktaha public schools. He later credited his career as an artist to the influence of Oklahoma historian Grant Foreman, who saw Stone's early efforts exhibited at state fairs in Muskogee and Okmulgee and encouraged him to enroll in art classes at Bacone College. There he subsequently studied under Acee Blue Eagle and Woodrow Crumbo. Stone attended Bacone College from 1936 to 1939. After leaving school, he married and supported himself at various jobs. From 1948 to 1951 he worked for Thomas Gilcrease, Tulsa oilman and art collector, for whom he produced a unique series of wood sculptures. Stone later worked in Tulsa as an ornamental pattern maker for Ernest Wieman Iron Works and as a die finisher for Douglas Aircraft Company. He eventually established a permanent studio near Locust Grove and after 1961 devoted himself entirely to art.

Exhibiting regionally and nationally, Stone gained wide recognition for his stylized human and animal figures created from a variety of locally obtainable woods and occasionally cast in ceramic or bronze. He produced commissioned pieces for the National Hall of Fame for Famous American Indians at Anadarko in 1964, the Oklahoma Historical Society in 1965, and the National Cowboy Hall of Fame and Western Heritage Center in Oklahoma City in 1966. In 1969 his illustrations appeared in Cherokee Spirit Tales by Jack Gregory and Rennard Strickland, published by the Indian Heritage Association. That year, Stone received the Outstanding Indian Award from the Council of American Indians in Tulsa.

Willard Stone was inducted into the Oklahoma Hall of Fame in 1970. Bacone College awarded him an honorary degree in 1972. Oklahoma Christian College in Oklahoma City designated him a Distinguished American Citizen in 1974 and awarded him an honorary doctor of humanities degree in 1976. Meanwhile, between 1969 and 1980 he received a total of ten awards in juried competitions at the Five Civilized Tribes Museum in Muskogee, including that of Master Artist in 1973. He died on March 5, 1985, and was buried in the family cemetery at his home near Locust Grove.

Stone's work is preserved in public and private collections throughout the United States and abroad. Several pieces in the Gilcrease collection are unusual in relating to the birth of the atomic age. They are among the few of his works based on a contemporary theme. Important collections of Stone's work also are found at the Willard Stone Museum in Locust Grove, the Five Civilized Tribes Museum, the Cherokee National Museum near Tahlequah, and the U.S. Department of the Interior and the Smithsonian Institution in Washington, D.C.

The following (as per The Chicago Manual of Style, 17th edition) is the preferred citation for articles:
David C. Hunt, “Stone, Willard,” The Encyclopedia of Oklahoma History and Culture, https://www.okhistory.org/publications/enc/entry.php?entry=ST059.