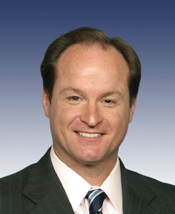 In 2002 Oklahomans elected John Sullivan, a Republican, as U.S. representative for Oklahoma's First Congressional District, which includes Tulsa, Washington, and Wagoner counties and parts of Rogers and Creek counties. Born on January 1, 1965, in Tulsa, Oklahoma, he is the oldest of Daniel and Mag Sullivan's four children. John Sullivan graduated from Tulsa's Bishop Kelley High School and received a bachelor's degree from Northeastern State University, Tahlequah, Oklahoma. He is married to the former Judith "Judy" Marie Beck, with whom he has four surviving children. A fifth child died in infancy on February 5, 2003.

Before entering politics, Sullivan worked in the private sector in managerial positions for BAMA and Love's Travel Stops and Country Stores, both Oklahoma-based businesses. He was also involved in real estate, energy, transportation, and investments in the Tulsa area. From 1995 to 2002 he represented District 71 in the Oklahoma House of Representatives. Sullivan served as U.S. representative from February 15, 2002, through January 3, 2013.

When U.S. Rep Steve Largent decided to campaign for Oklahoma governor, he resigned from the U.S. House, and a special election to fill his vacant position was held on January 8, 2002. During that special election and the general election in 2002, Sullivan defeated his major opponent, Democrat Doug Dodd. In the 2004 election Sullivan again faced Dodd. In the 2006 and 2008 elections Sullivan was opposed by Democrats Alan Gentges and Georgianna Oliver, respectively. Unopposed by a Democrat in 2010, Sullivan gained 77 percent of the votes over Independent Angelia O'Dell's 23 percent. After five wins, he was defeated by Republican James "Jim" Bridenstine in the primary election on June 26, 2012.

During his five terms in the U.S. House, Sullivan, a conservative and a Roman Catholic, has opposed legalized abortion and stem cell research on embryonic cells. He was an opponent of gun control and rapid troop removal from Iraq. He has served as vice-chair of the Energy and Power Subcommittee of the Energy and Commerce Committee. He was chosen to sit on the Select Committee on Energy Independence and Global Warming. He also sat on the subcommittees on Environment and Economy and on Oversight and Investigations.

The following (as per The Chicago Manual of Style, 17th edition) is the preferred citation for articles:
Linda D. Wilson, “Sullivan, John Alfred,” The Encyclopedia of Oklahoma History and Culture, https://www.okhistory.org/publications/enc/entry.php?entry=SU013.