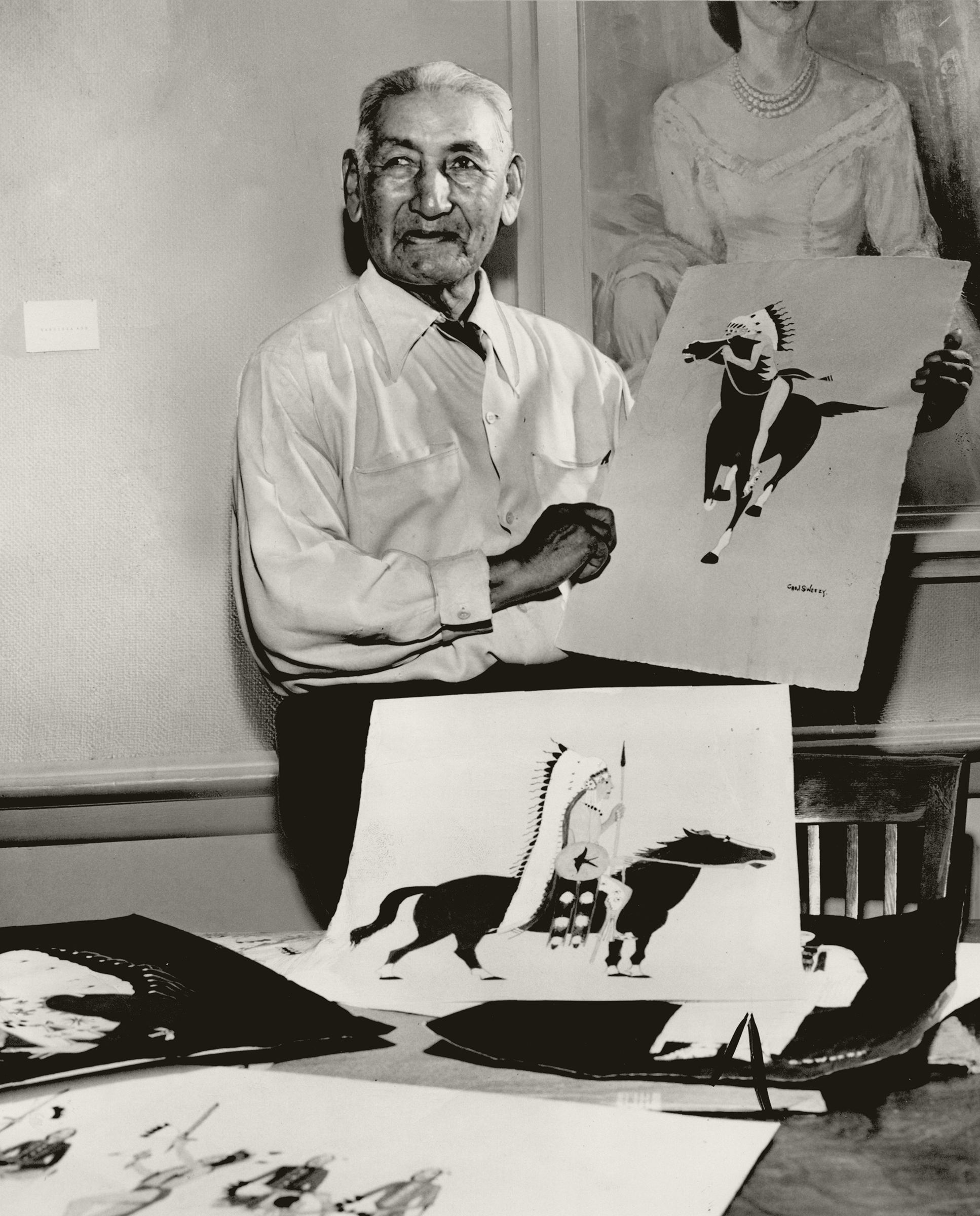 One of the first American Indian professional artists, Carl Sweezy (Arapaho name Wattan, Black) was born ca. 1879–80 in a tipi near Darlington on the Cheyenne-Arapaho reservation in Indian Territory. He was the son of Hinan Ba Seth (Big Man). The artist was educated in Mennonite mission schools at Darlington and at Halstead, Kansas, and attended Carlisle Indian Industrial School in Pennsylvania and Chilocco Indian Agricultural School in Oklahoma. He became interested in art at age fourteen when he received a box of watercolors as a gift from a teacher.

At the turn of the twentieth century Sweezy worked for anthropologist James Mooney as an illustrator, listening as Mooney interviewed elderly tribal members and then reproducing various items of material culture for study or sale. He credited Mooney with encouraging him to draw and paint. A self-taught artist, Sweezy held a variety of jobs, including Indian policeman and professional baseball player. His most art productive period is generally considered to have been during and after his association with Mooney.

Sweezy is one of several early-twentieth-century Native artists who were encouraged by anthropologists and who eventually became an integral part of their research. His subjects ranged from portraits of individuals to portrayals of everyday life to panoramic scenes of battles and ceremonials. With traditional culture as a primary subject matter, his paintings often portrayed in a wealth of detail documenting traditional culture and the transition to the accepted way of "American life." He also portrayed the ceremonies of the Native American Church in Oklahoma.

His painting style is traditional, yet he adds perspective and multiple-subject images that reference the western painting tradition. He painted in oil, watercolor, and sometimes even in house paint. His work is held by the Gilcrease Museum, the Philbrook Museum of Art, and the Fred Jones Jr. Museum, in Oklahoma, and by the Heard Museum in Phoenix and the Museum of the American Indian in New York. Carl Sweezy died on May 28, 1953.

The following (as per The Chicago Manual of Style, 17th edition) is the preferred citation for articles:
Marshall Gettys, “Sweezy, Carl,” The Encyclopedia of Oklahoma History and Culture, https://www.okhistory.org/publications/enc/entry.php?entry=SW004.