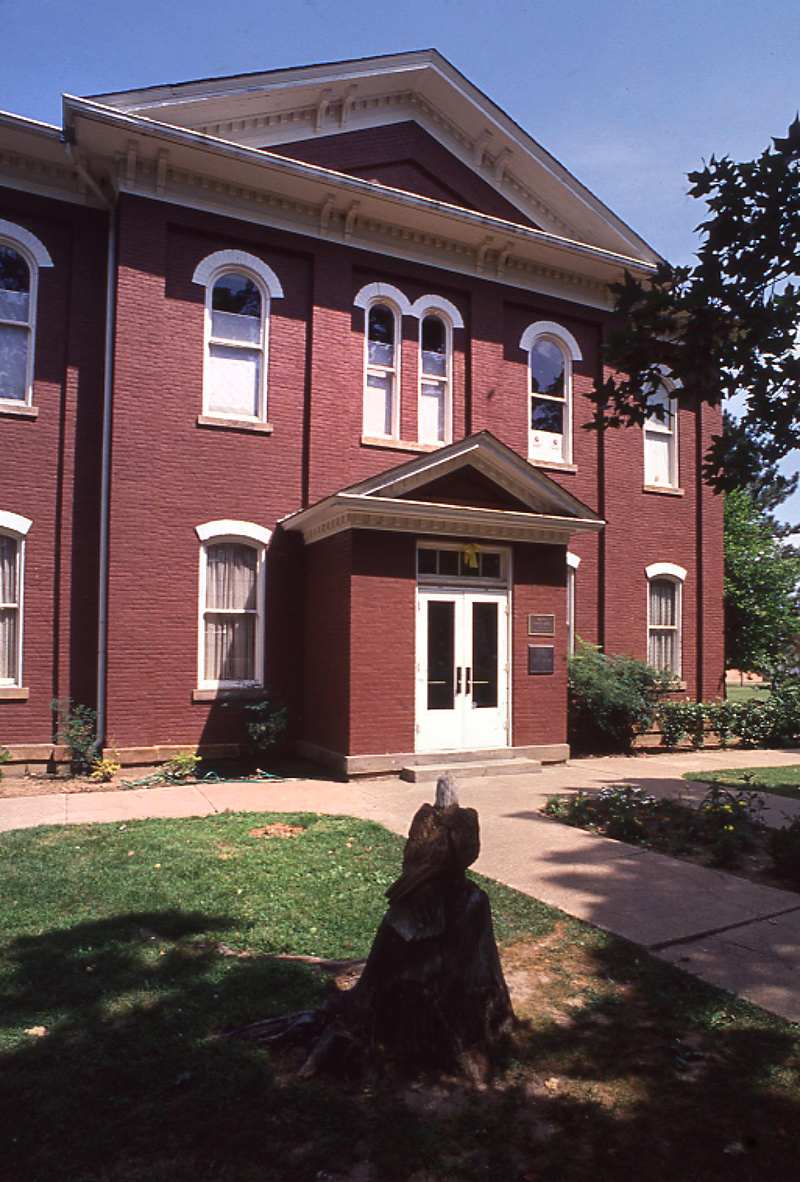 The county seat of Cherokee County, Tahlequah, in the eastern section of Oklahoma lies only forty miles from the Arkansas state line at the intersection of U.S. Highway 62 with State Highways 10, 51, and 82. Established as the Cherokee capital by the Cherokee people in 1839 at the close of the Trail of Tears, the town soon became a community that planned for the future through sound government, good schools, prosperous businesses, strong religious entities, and a desire to grow in Indian Territory. The Cherokee were a vital, progressive people, and the town grew around the capital square, a government complex of log or frame buildings. During the hostilities of the Civil War, the differing Cherokee factions destroyed most of the capital complex. After the war ended, a brick capitol was built and was first occupied in 1870. After 1907 statehood this building was used as the Cherokee County Courthouse. It was returned to the Cherokee Nation in 1970.

By 1842 Tahlequah had four stores and was a thriving business community. In 1843 the town was surveyed with 160 acres in the town site. The great Indian Intertribal Council of 1843 brought an influx of ten thousand people, with twenty-one tribes represented. In 1844 the Cherokee Supreme Court building and the National Hotel were built, and the Cherokee Advocate newspaper was first printed. The first school was taught in 1845, a post office was opened in 1847, and higher education became a reality with the establishment of the Cherokee Male and Female seminaries that opened in 1851. In 1852 the U.S. district court at Muskogee issued the first incorporation act pertaining to Tahlequah.

After the destruction of the Civil War, the people of Tahlequah began to rebuild. The first telephone system in Indian Territory came to Tahlequah in 1886, and the Ozark and Cherokee Central Railway arrived in 1902. Mission schools were thriving under the Baptists and Presbyterians. Methodist and Moravian groups were also influential. The first bank came into existence in 1891 on Muskogee Avenue. A disastrous fire of 1895 only inspired the business community to rebuild.

With the arrival of statehood, Tahlequah showed a new burst of growth. New homes were constructed. The Cherokee Female Seminary, built at Park Hill and burned in 1887, had been rebuilt in Tahlequah. It became Northeastern State Normal School and the Northeastern State Teachers College (now Northeastern State University). Municipal utilities were brought into existence. The first hospital was opened in a suite of rooms on Muskogee Avenue. The first public school building was built in 1906 and the first public high school in 1923. In the late 1960s and into the 1970s Tahlequah hosted the National Parachuting Championships and the world championship of that sport in 1972.

In 2000 the Cherokee Nation employed more citizens than any other entity, with the state university a close second. The health care and social assistance sector of business created the most jobs for the community. An active participant in the Oklahoma Main Street Program, Tahlequah boasted nine structures on the National Register of Historic Places at the beginning of the twenty-first century, including the Cherokee National Capitol (NR 66000627), which is also listed as a National Historic Landmark and on the Historic American Buildings Survey.

The following (as per The Chicago Manual of Style, 17th edition) is the preferred citation for articles:
Beth Harrington, “Tahlequah,” The Encyclopedia of Oklahoma History and Culture, https://www.okhistory.org/publications/enc/entry.php?entry=TA002.