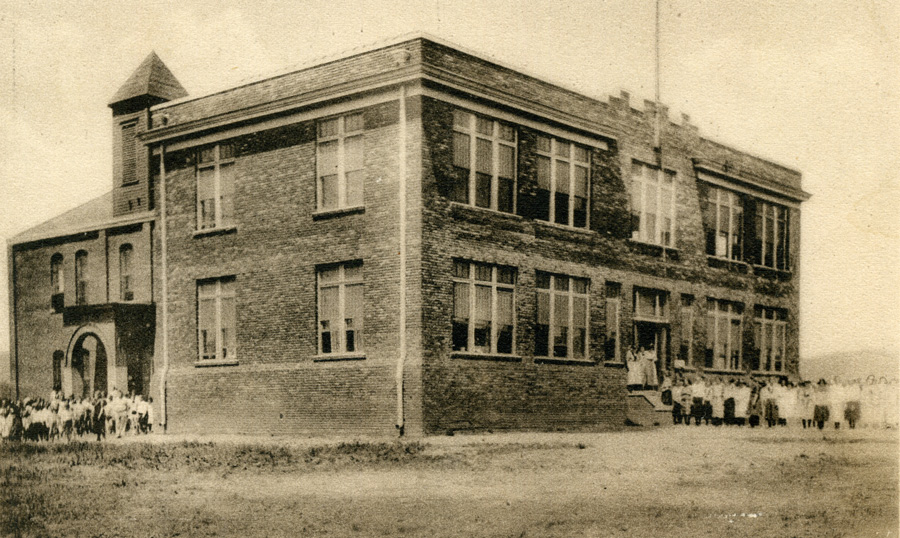 Located in Le Flore County, Talihina is approximately thirty-nine miles southwest of Poteau on U.S. Highway 271. The town lies at the junction of 271 with State Highways 1, 63, and 82. Situated in scenic Kiamichi Valley between the Kiamichi and Winding Stair mountains, Talihina existed as a loosely organized frontier community as early as 1884 when a town building was constructed. The town received its name when the St. Louis and San Francisco Railway (Frisco) laid tracks through the Choctaw Nation in 1886–87. The word "Talihina" is a contraction of two Choctaw words meaning "iron road."

The railroad opened the area to eastern markets. Cattle, timber, and cotton provided the economic basis for expansion, and Talihina began to grow. The town claimed a population of 400 when it was incorporated in 1905, two years before Oklahoma statehood. By 1910 the 491 residents enjoyed telephone and electric service. By 1918 the town and surrounding area supported two banks, three churches, and seven general stores, and two sawmills operated. In the period between 1915 and 1921 two major hospitals, the Choctaw-Chickasaw Tuberculosis Sanatorium and the Eastern Oklahoma State Tuberculosis Sanatorium, were built against the foothills of Buffalo Mountain just northwest of Talihina. The location was chosen for its healthful climate and for the beautiful view of surrounding mountains.

Because the Kiamichi Valley provides a wide variety of outdoor recreational activities, outdoor sports and tourism have long been important to the economy. Forests of mixed pines, cedar, and hardwood, abundant wildlife, and many rivers and streams make the valley an attraction for outdoor enthusiasts. Beginning in the late 1920s six lakes were constructed throughout the valley, expanding the area available for fishing, horseback riding, boating, hiking, and camping. Seven miles northeast of town is Talimena State Park and Old Military Road historic site (National Register of Historic Places, NR 76002155), which is the western terminus of Talimena Drive, or Scenic Byway, a stretch of highway to Mena, Arkansas, enjoyed by nature-lovers for its fall foliage.

The 1920 population stood at 690, and it increased during the next decades to 1,057 in 1940 and 1,048 in 1960. The Talihina Signal, the Talihina News, the Talihina Tribune, and the Talihina American were among the newspapers that served the town, with the American continuing into the twenty-first century. Increasing tourist activity spurred Talihina's growth, and its population in 1970 was 1,223 and in 1990, 1,297. With the completion of Choctaw Nation Health Center in 1999, Talihina's economic stability further improved. In 2000 the census recorded a population of 1,211. The 2010 population was 1,114.

The following (as per The Chicago Manual of Style, 17th edition) is the preferred citation for articles:
Michael S. Cox, “Talihina,” The Encyclopedia of Oklahoma History and Culture, https://www.okhistory.org/publications/enc/entry.php?entry=TA004.