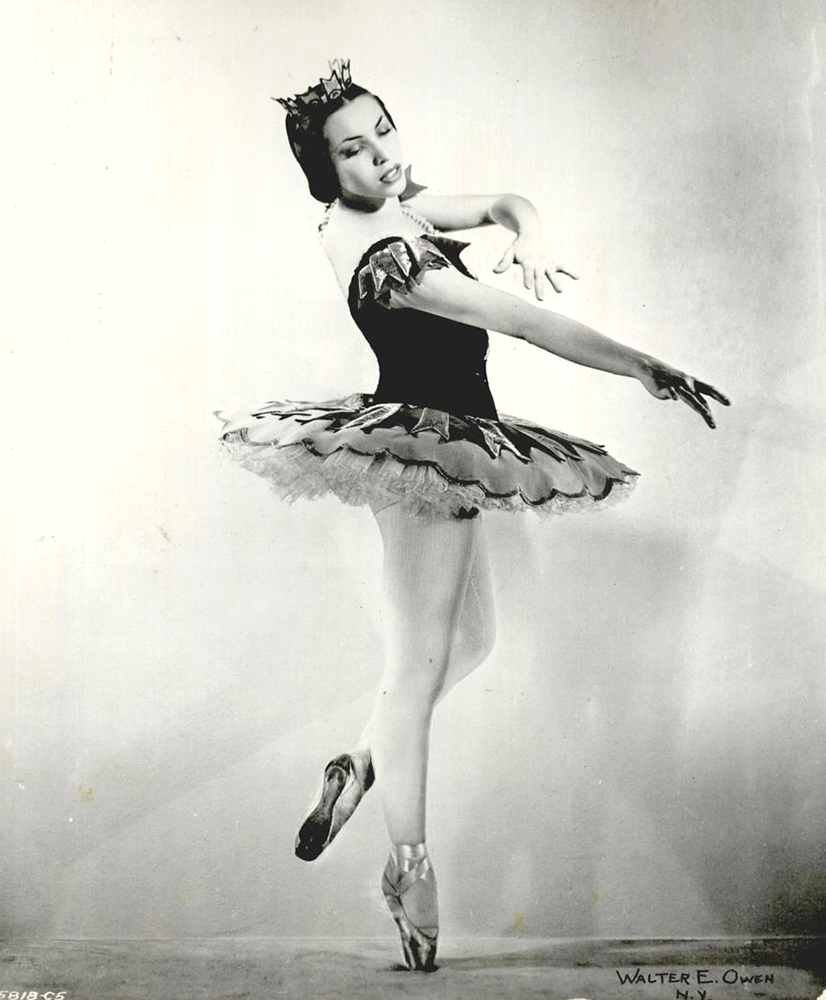 Born at Fairfax, Oklahoma, on January 24, 1925, to Alexander and Ruth Porter Tall Chief, Elizabeth (Betty) Marie Tallchief learned the traditions of the Osage from her grandmother Eliza Bigheart Tall Chief. Tallchief's great-grandfather Peter Bigheart negotiated with the United States government in 1906 concerning the oil reserves that made the Osage tribe wealthy.

Known as Betty Marie, Tallchief had an older brother, Gerald, and a younger sister, Marjorie. Mrs. Tall Chief wanted the best for her children and made the decision to move the family to California when Betty Marie was eight years old. Tallchief's mother wanted her to be a concert pianist but also let her attend dance lessons.

Ernest Belcher gave Tallchief ballet instruction until she was twelve. At this time, Madame Bronislava Nijinska and David Lichine became her teachers. Upon graduating high school, Tallchief traveled to New York and began apprentice work with the Ballet Russe de Monte Carlo. After the Canadian tour in 1942 she became a member of the corps de ballet, and Ballet Russe requested that she change her name to Maria Tallchieva. Proud of her Osage heritage, Tallchief refused but compromised and made the change from Betty Marie Tall Chief to Maria Tallchief. In 1944 George Balanchine, the great Russian choreographer, joined Ballet Russe. Tallchief and Balanchine married August 16, 1946. He choreographed leading parts for her in ballets such as Orpheus, The Firebird, Swan Lake, and The Nutcracker. The Firebird established Tallchief as a prima ballerina and became the high point of her career. She stated that Balanchine made her a star in the art of ballet. In 1954, on tour with Ballet Russe, she made two thousand dollars per week and was the highest paid prima ballerina of that time.

Tallchief left Ballet Russe in 1947 to pursue a career with her husband at the Ballet Society, or the New York Ballet. By 1951 Balanchine and Tallchief had annulled their marriage, but they stayed together as dancer and choreographer. She married Elmourza Natirboff on October 4, 1952, but ended the marriage in 1954. She met and married Henry Buzz Paschen on June 3, 1956. Their union brought her only child, Elise Maria Paschen.

Tallchief won many distinctive awards and associated herself with many civic organizations. She has been twice received the Washington Press Women of the Year Award and the Annual Dance Magazine Award. The Oklahoma Legislature celebrated her achievements by declaring June 29, 1953, as Maria Tallchief Day, and the Osage tribe named her Princess Wa-Xthe-Thonba, Woman of Two Standards. In 1991 she and four other Oklahoma-born Indian prima ballerinas, including her sister, Marjorie Tallchief, were honored by being pictured in a mural, Flight of Spirit, in the Oklahoma Capitol. Maria Tallchief also received the prestigious Kennedy Center Honors in 1996. She served as director of Chicago's Lyric Opera Ballet from 1973 to 1979 and of the Chicago City Ballet from 1980 to 1987. She involved herself in the America for Indian Opportunity and directed the Indian Council Fire Achievement Award.

Tallchief danced all over the world, strongly impacting the art of ballet. She retired as a prima ballerina in 1966 and resided in Chicago. She died there on April 11, 2013. Maria Tallchief will always be popularly known as Oklahoma's Firebird.

The following (as per The Chicago Manual of Style, 17th edition) is the preferred citation for articles:
Starlynn Raenae Nance, “Tallchief, Elizabeth Maria,” The Encyclopedia of Oklahoma History and Culture, https://www.okhistory.org/publications/enc/entry.php?entry=TA006.