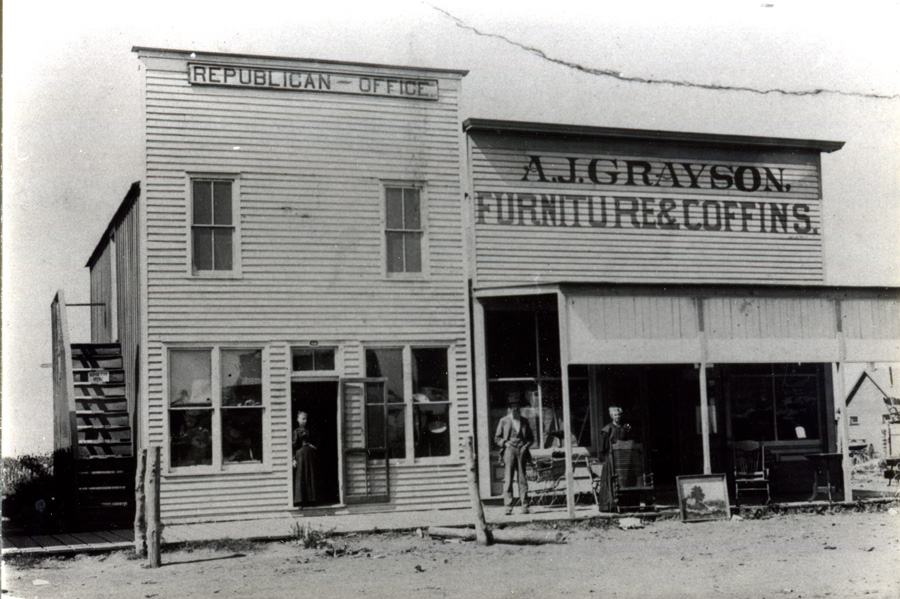 Located in Pottawatomie County, Tecumseh is situated at the intersection of U.S. Highways 177 and 270 and State Highway 9. Named after the famous Shawnee chief, the location was selected by a U.S. Army major sent from Fort Reno in the summer of 1891. The townsite contained 320 acres, twenty of which were allotted to the Quakers (Society of Friends). The western third of the area was covered by large oak trees (in the Cross Timbers), and the eastern two-thirds was prairie.

On September 23, 1891, as a result of the September 22 land run into the Sac and Fox, Iowa, Kickapoo, Shawnee, and Potawatomi reservations, Tecumseh was opened for settlement. This came about one day after the run because surveyors had not completed their work. At noon, as soldiers fired shots in the air on the perimeter of the townsite, approximately fifteen thousand individuals sought five thousands homesteads. Among the crowd were gamblers, promoters, and adventurers as well as men and women determined to shape a new community. Newspapers reported conflicting stories regarding the death of A. L. "Doc" Rountree of Norman, Oklahoma Territory, who was killed during the run. The future town had been designated seat of County "B" on July 17, 1891, by the Department of the Interior. On September 18, 1891, a post office was established.

Representatives of religious and fraternal bodies were present, and Presbyterian minister William Myers held his first meeting on the northwest corner of the public square on the Sunday after the run. Merchants immediately opened for business in tents. Small, wood-frame buildings replaced tents over the next year, and the frame buildings were replaced with brick edifices in the early 1900s. Thus the business district developed, and it remained basically the same, with many of the buildings still standing at the turn of the twenty-first century. Beginning in 1903 the Atchison, Topeka and Santa Fe Railway served a surrounding agricultural region in which cotton was the main crop. At 1907 statehood the population stood at 1,621. The censuses for 1910 and 1920 reported 1,625 and 1,429, respectively. Tecumseh served as the Pottawatomie County seat until Shawnee won the designation in a 1930 election. Over the years the citizens have supported a variety of newspapers, including the Capital, the Herald, the Standard, the Republican, the Democrat, and most recently the County-Wide News.

In the 1920s cotton production declined due to depressed prices and boll weevil infestation. During the Great Depression many townspeople moved to rural areas in order to secure a subsistence living. In 1930 Tecumseh had 2,419 inhabitants. That number declined to 2,042 in 1940. With 4,451 residents counted in 1970 and 6,098 in 2000, the town's population increased each decade until it peaked at 6,457 in 2010. The labor force was primarily engaged in public and private service occupations. Tecumseh maintained a home rule charter form of government.

Phil Cannon and Glenn Dale Carter, Tecumseh, Oklahoma: An Illustrated History of Its First Century: With an Eye to Its Limitless Future and a Salute to the People Who Have Made It Grow Strong (Inola, Okla.: Evans Publications, Inc., 1991).

The following (as per The Chicago Manual of Style, 17th edition) is the preferred citation for articles:
Glenn Dale Carter and Don Holland, “Tecumseh,” The Encyclopedia of Oklahoma History and Culture, https://www.okhistory.org/publications/enc/entry.php?entry=TE003.