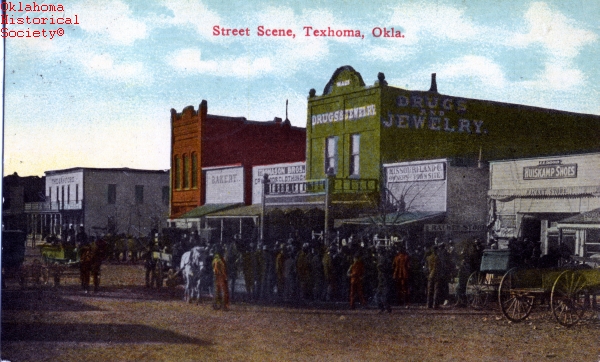 A Panhandle town that is located in southern Texas County, Oklahoma, Texhoma lies at the junction of State Highway 95 and U.S. Highway 54 on the Oklahoma-Texas border, twenty-four miles from Guymon. The area existed in No Man's Land, which had no jurisdiction from 1850 to 1890. Ranching dominated, but in the late 1880s squatters began to settle in the vicinity. The Organic Act of 1890 placed the region in Oklahoma Territory. In 1902 the Chicago, Rock Island and Pacific Railway laid tracks from Kansas to the Texas line. Anticipating the railroad, in 1901 the nearby post office of Loretta moved and changed its name to Texhoma. It discontinued for a time, but in March 1902 the post office reopened. The name referred to the community's location on the state line, and the town expanded into both states, with the train depot built right on the boundary. The boxcars could be loaded on the Texas or Oklahoma side, depending on the cheapest shipping rates.

By 1907 Texhoma, Oklahoma, was incorporated by its 262 residents. In 1910 the town had a population of 372, and by 1911 three banks, two newspapers, a drugstore, a lumberyard, a grain elevator, four general stores, a hotel, and several other retail outlets served the community. Newspapers included the Texhoma Argus and the Texhoma Times. In 1916 the Texas town of Texhoma was incorporated. In 1920 the Oklahoma town's population stood at 687, and it climbed to 819 in 1930. The Great Depression and dust storms that plagued the Panhandle region tormented Texhoma, and the 1940 population of 577 reflected the out-migration. In the early 1930s a mistake was discovered in the 1860 survey of the state line, and as a result the border moved south nearly five hundred feet. After lengthy litigation between Texas and Oklahoma, the depot and most of the downtown businesses belonged to the Oklahoma side. The two factions have kept separate municipal governments.

The town recovered from the depression and began to grow. In 1946 residents supported a bank, several grain elevators, and a number of other businesses that catered to area farmers. The 1950 population was 1,464, and in 1960 it fell to 911. In 1976 the Texas and Oklahoma legislatures passed laws that would allow a school district of Texhoma to straddle the border. Under an agreement between the two school boards Texas took responsibility for kindergarten and grades five through eight, and Oklahoma managed grades one through four and high school. The system later changed, with Texas schools serving grades kindergarten through four and Oklahoma educators teaching grades five through twelve. In 1980 Oklahoma's Texhoma had 785 residents, while the Texas portion's claimed 358. In 1990 both sides declined, with the Oklahoma town having a population of 746 and the Texas community numbering 291. In 2000 the Texhoma School District enrolled 238 students, and the population of Texhoma, Oklahoma, stood at 935. In 2010 the census counted 926 residents.

The following (as per The Chicago Manual of Style, 17th edition) is the preferred citation for articles:
Larry O'Dell, “Texhoma,” The Encyclopedia of Oklahoma History and Culture, https://www.okhistory.org/publications/enc/entry?entry=TE026.