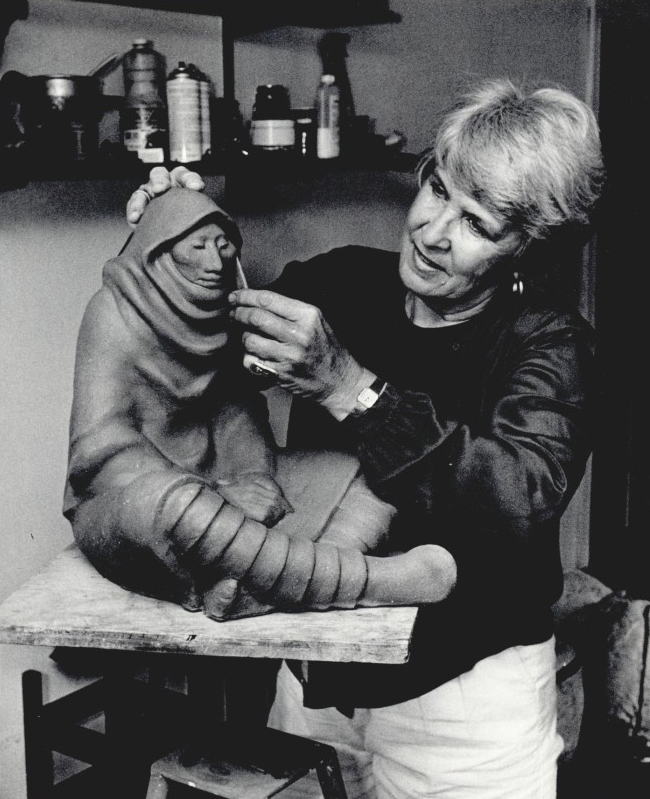 Artist and sculptor Shirley Ann Thomson was born on December 9, 1929, in St. Louis, Missouri, to Courtland and Helen Vaughn Thomson. When she was five, her family moved to Oklahoma City. She attended public school there and in 1945 enrolled at the University of Oklahoma as an art major. Under the tutelage of Professor Joseph R. Taylor she discovered sculpture, and its three-dimensional form sparked a creative urge that became the focus of her artistic life. After only two years of formal training she had to abandon college because of family financial difficulties.

In 1951 Shirley Thomson married Joe D. Smith, became a housewife, and started raising a family, which eventually included Scott C., Steven J., and Shelley Ann. Her husband's work took the family to Durango, Colorado, for three and one-half years during the late 1950s. There Shirley discovered Navajo women, whose quiet dignity, colorful costumes, and classic features became the inspiration for her artistic effort. Upon returning to Oklahoma City in the early 1960s she continued her art education on an informal basis at Oklahoma City University and refined her style toward a simplified human female form with graceful flowing lines.

A divorce from Joe Smith in 1973 provided the impetus to begin a professional career as a sculptor. Since then she has exhibited in such places as the Gilcrease Museum in Tulsa, the National Cowboy and Western Heritage Museum in Oklahoma City, the Haley Library and History Center in Midland, Texas, and a variety of other venues. She is a lifetime member of the Oklahoma Sculpture Society, an associate member of the National Sculpture Society, a founding member of American Women Artists and the West, and a member of the National Academy of Western Artists. Her work resides in numerous private and museum collections as well as in the State of Oklahoma Art Collection.

The following (as per The Chicago Manual of Style, 17th edition) is the preferred citation for articles:
Bobby D. Weaver, “Thompson-Smith, Shirley Ann,” The Encyclopedia of Oklahoma History and Culture, https://www.okhistory.org/publications/enc/entry.php?entry=TH015.