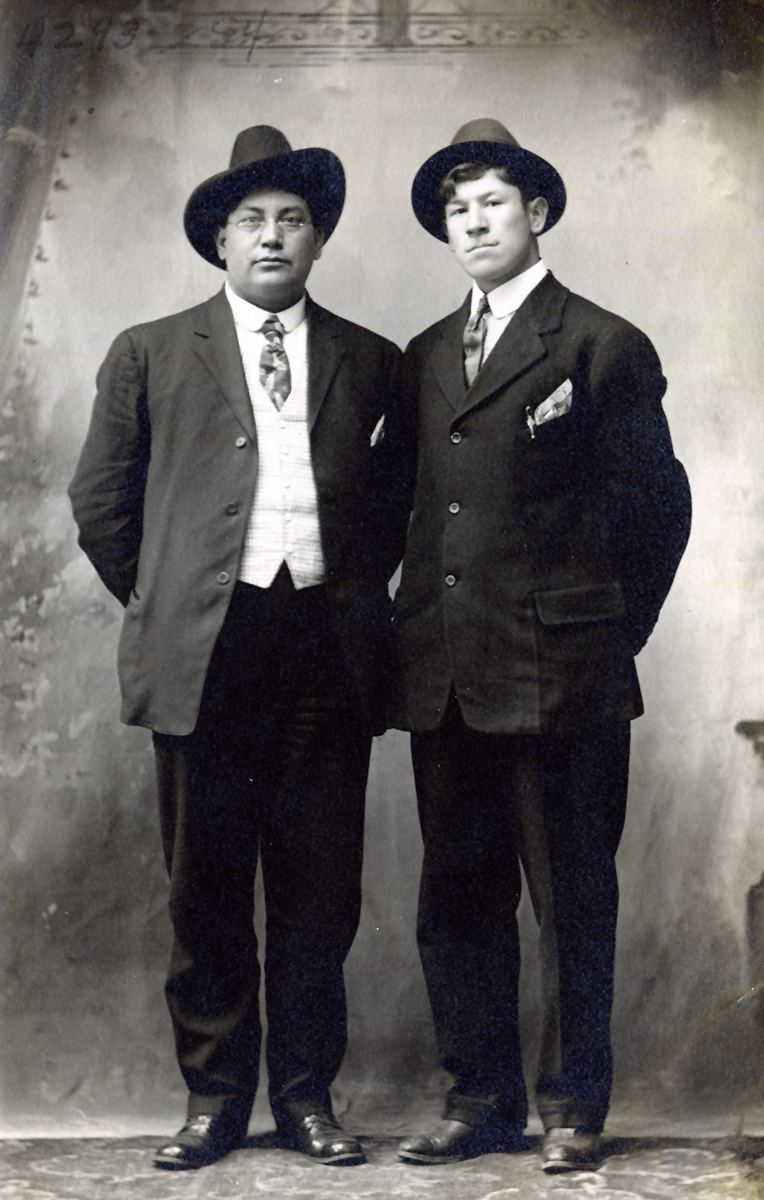 Jim Thorpe was perhaps the United States' greatest athlete of the twentieth century. An American Indian, he is usually considered to be Sac and Fox, although he also had Potawatomi, Menominee, and Kickapoo, as well as Irish and French, ancestry. Thorpe was born a twin on the Sac and Fox reservation near present Prague, Oklahoma, on May 28, 1888 (some controversy exists concerning his birth year, as his estate cites 1887), to Hiram and Charlotte Vieux Thorpe. They named one twin Charles and the other James Francis, known also as Wa-tho-huck, which in the Sac and Fox language means "Bright Path." He indeed followed one of the brightest paths in United States athletic history, excelling in football, baseball, and Olympics competition. He was selected by the Associated Press as the greatest athlete of the first half of the twentieth century.

Thorpe lived his earliest years at his family's rural home near Prague. At age eight he was devastated by the death of his twin. When Wa-tho-huck was an adolescent, his parents enrolled him in the federal government's boarding school system. He attended Sac and Fox Indian Agency School near Tecumseh, Oklahoma, and Haskell Institute in Lawrence, Kansas, and in 1903 he entered Carlisle Indian School in Carlisle, Pennsylvania. During this period both of his parents died.

At Carlisle he would make a name for himself as an athlete. In 1907 the school's famed coach Glenn S. "Pop" Warner recruited him for the track team. Over the next two years Thorpe became one of the school's top track stars, competing against and defeating opponents from some of the top collegiate-level track programs in the United States. In 1908 he also excelled as a halfback for the Carlisle football team. He received good marks in school, but by the summer of 1909 he began to tire of Carlisle and was listed as a "deserter."

During the summers of 1909 and 1910 Thorpe played semiprofessional baseball in North Carolina. He did not know that his actions violated the harsh amateur athletic code of that era, or that so doing would later have major consequences. He returned to Carlisle in 1911 and starred in football victories over Harvard, Brown, and the U.S. Military Academy (Army) over the next two seasons. He was a first-team All-American selection for 1911 and 1912. During the 1912 season he scored twenty-five touchdowns and 198 points and led his team to a record of twelve wins, one loss, and one tie. Many sportswriters have considered that team to be the best of its era.

During the summer of 1912 Thorpe also entered international athletic competition, and he represented the United States in the fifth modern Olympics, held that year in Stockholm, Sweden. He competed in the high jump and the long jump and won gold medals in the pentathlon and the decathlon. However, following revelations of his semiprofessional baseball career by a Worchester, Massachusetts, newspaper reporter, in January 1913 the Amateur Athletic Union stripped Thorpe of his gold medals and removed his name from the Olympic record books.

Although angered, Thorpe went on to establish himself as an outstanding professional athlete during the next two decades. He played baseball for the New York Giants, Cincinnati Reds, and Boston Braves between 1913 and 1919. Although he had a modest .252 lifetime batting average in the major leagues, he hit .327 in sixty games during his last season with Boston. Including his time spent in the minor leagues, he played professional baseball for twenty years.

Thorpe is better known as a football player, however. He played for the Canton Bulldogs during the 1915, 1916, 1917, 1919, and 1920 seasons, leading a team that many recognized as the best in the country. In 1920 he became the first president of the American Professional Football Association, the forerunner of the National Football League (NFL). He also played for teams in Cleveland, Rock Island, and New York before playing his final game with the Chicago Cardinals in 1928. In 1922 Thorpe and Walter Lingo, who purchased the franchise from the NFL, created an all-American Indian professional team called the Oorang Indians.

Toward the end of his athletic career Thorpe was divorced from Iva Miller, whom he had met at Carlisle and married in 1913. Together they had had four children. In 1925 he married Freeda Kirkpatrick and produced four more children. After a second divorce, in 1945 he married Patricia Gladys Askew. Thorpe reportedly had an alcohol problem, and he had trouble establishing a career after his playing days ended. He moved to Hollywood in the 1930s and worked as a film extra and in construction. He died practically destitute in Lomita, California, on March 28, 1953.

While his life's tragedies were very real, they often have been somewhat distorted. Films such as the 1951 biographical drama Jim Thorpe: All American present him as a tragic and lonely figure. This portrayal ignores his generous character and the work that he did to inspire American Indians during the 1930s, 1940s, and 1950s.

After his death his widow, Patricia, attempted to have his body buried in Oklahoma. Not able to afford a burial monument that she considered properly commemorative, she asked the state to build a memorial site in his honor. However, Gov. Johnston Murray refused to sign a bill authorizing its construction, and Patricia Thorpe searched for a more accommodating community. In 1954 the towns of Mauch Chunk and East Mauch Chunk, Pennsylvania, agreed to do so and changed the name of their municipalities to Jim Thorpe. Several of Thorpe's children have since lobbied to have his remains returned to his native state.

In 1982, responding to pressure organized by his family, the International Olympic Committee finally recognized Jim Thorpe as "co-winner" of the 1912 pentathlon and decathlon. In 1999 his daughter Grace led a campaign to have her father recognized as ESPN's Athlete of the Century. In 2000 a majority of respondents to an ABC Wide World of Sports Internet poll did vote for Thorpe as the twentieth century's greatest athlete, and the results were announced prior to Super Bowl XXXIV. On July 15, 2022, the International Olympic Committee restored Jim Thorpe as sole winner in the 1912 decathlon and pentacathlon events.

The following (as per The Chicago Manual of Style, 17th edition) is the preferred citation for articles:
John Bloom, “Thorpe, James Francis,” The Encyclopedia of Oklahoma History and Culture, https://www.okhistory.org/publications/enc/entry.php?entry=TH016.