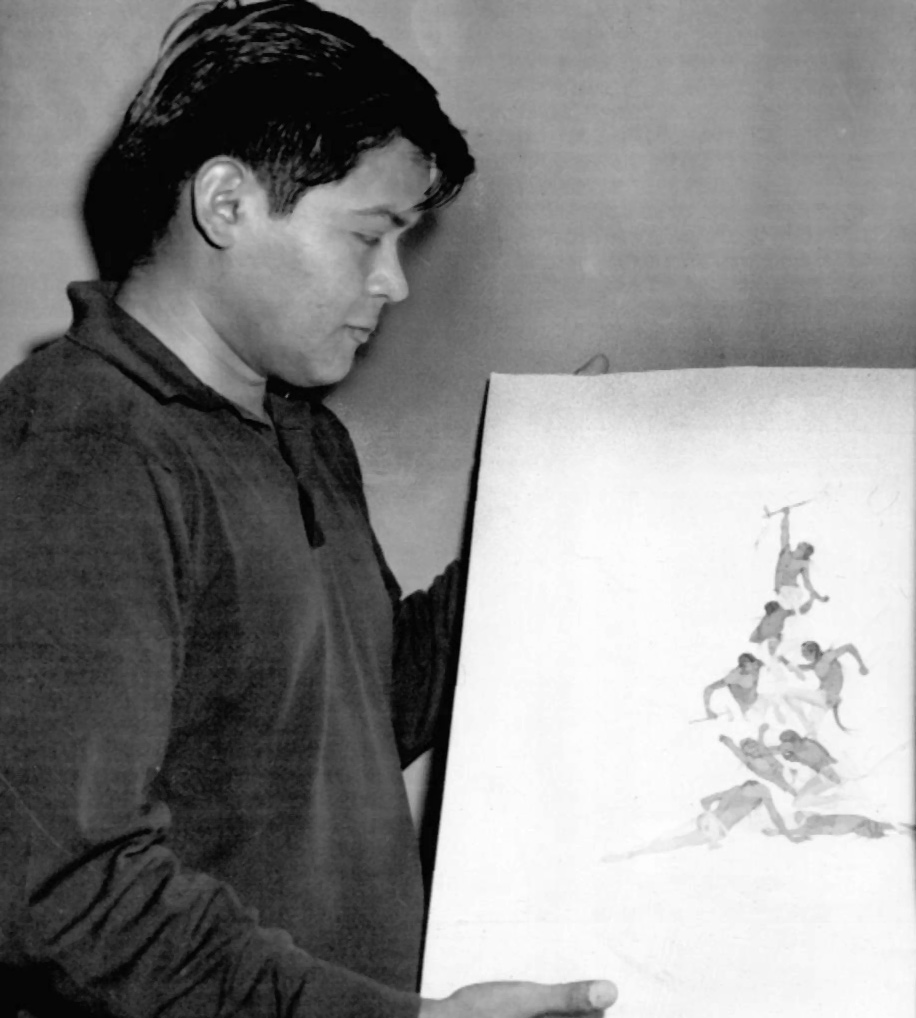 A Creek-Seminole painter born at Tahlequah on July 8, 1941, Jerome Tiger grew up near Eufaula, Oklahoma, and attended public schools in Eufaula and Muskogee. He dropped out of high school at sixteen and joined the U.S. Navy, serving in the Naval Reserve from 1958 to 1960. Finding employment as a laborer and sometime prizefighter, he continued to draw and paint in his spare time. He briefly attended the Cleveland Engineering Institute in Cleveland, Ohio, from 1963 to 1964. For the most part, however, he found formal schooling restrictive and frustrating.

Encouraged by a friend, Nettie Wheeler of Muskogee, Tiger submitted several paintings in 1962 to the American Indian Artists Annual at Philbrook Art Museum in Tulsa. Recognition of his talent was immediate. Over the next five years he produced a large body of work that brought critical acclaim and a number of honors, including the All American Indian Days Grand Award in Sheridan, Wyoming, in 1965 and first prize in the National Exhibition of American Indian Art held in Oakland, California, the following year. Also in 1966 Tiger mounted a solo exhibition at Philbrook, a show that proved to be a sell-out with the public. Curator Jeanne Snodgrass asked the artist to replace items that had been sold on opening night. He is said to have replaced many of them twice before the show closed.

Tiger was twenty-six years old when on August 13, 1967, he died as the result of an accident with a handgun. He was survived by his wife Peggy Richmond Tiger and three children, one of whom, Jerome Christopher Tiger, became an artist and at age twenty-three also died in a shooting accident. An older brother, Johnny Tiger, Jr., followed a career in the arts as a commercial artist, painter, and award-winning sculptor. A cousin, Jon Tiger, also distinguished himself as graphic artist and painter.

Much of Jerome Tiger's work was sold as quickly as he produced it and remains in private hands. Publicly he is represented in the collections of the Philbrook and Gilcrease museums in Tulsa, the Five Civilized Tribes Museum in Muskogee, Woolaroc Museum near Bartlesville, the Museum of New Mexico in Santa Fe, and the Museum of the American Indian and the Bureau of Indian Affairs, U.S. Department of the Interior, in Washington, D.C.

The following (as per The Chicago Manual of Style, 17th edition) is the preferred citation for articles:
David C. Hunt, “Tiger, Jerome Richard,” The Encyclopedia of Oklahoma History and Culture, https://www.okhistory.org/publications/enc/entry.php?entry=TI001.