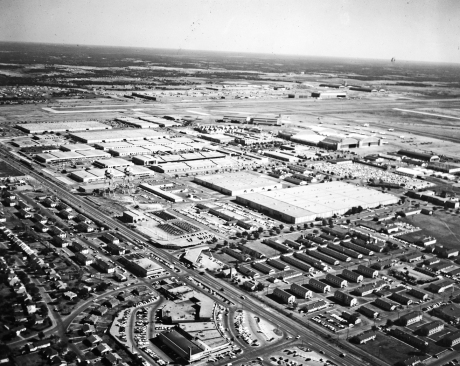 The genesis of the installation came in late 1940 as World War II enveloped Europe and after key Oklahoma City entrepreneurs formed the Oklahoma Industries Foundation. The civic leaders, led by Edward K. Gaylord, Wilbur E. Hightower, Tom Braniff, Frank Buttram, and Stanley Draper, learned that the War Department was looking for an appropriate site to build an aircraft maintenance depot in the American Midwest. They acquired 960 acres and offered the land to the government at no cost. While holding the option on another 480 acres, they promised to provide necessary utilities, roads, and a rail spur to the airfield.

Following the site selection team's visit to Oklahoma, it was announced on April 8, 1941, that Oklahoma City had won the depot competition. Later that month local citizens voted in favor of the required $928,000 bond election by a margin of nineteen to one. The ground-breaking ceremony took place on July 30, 1941. In lieu of hand-held shovels, the officials thought it appropriate to use a huge bulldozer to represent the magnitude of the building project. Construction continued, and the size of the planned airfield expanded through the year.

On January 15, 1942, Lt. Col. William R. Turnbull issued General Order No. 1 marking the establishment of the Midwest Air Depot. Because the installation was far from completion, operations began in downtown Oklahoma City, first in the Commerce Exchange Building and later in the Bass Building. As February began, Colonel Turnbull announced that the new air repair center would be known as the Oklahoma City Air Depot. On March 1, 1942, the War Department officially activated the airfield. Hiring new workers accelerated as the depot competed with the Douglas Aircraft Plant going up east of the runway.

During the war years thousands of Oklahomans and military personnel from across the United States laid the foundation of Tinker's reputation for excellence in depot repair and maintenance. At the employment high point in late 1943, 13,500 people worked at the air depot, while another 23,000 worked for Douglas Aircraft. Nearly one-half of all the Tinker and Douglas workers were women who exemplified the famed "Rosie-the-Riveter." Douglas employees built more than five thousand C-47s for World War II and at one time produced thirteen Skytrains per day. Meanwhile, Tinker toilers repaired, modified, and maintained B-17, B-24 and B-29 bombers. Their important "Eagle Project" enabled B-29 Superfortresses to conduct high-altitude precision bombing in the Pacific theater of operation.

When victory came, the Douglas Plant ceased operations, and everyone wondered what would become of the installation. Soon word arrived that Tinker Field would not only survive but would expand and take over the three-quarter-mile-long facility. In recognition of its permanent status, 150,000 people attended the formal dedication of Tinker Field on November 18, 1945, and heard Durant native Lt. Gen. Ira C. Eaker deliver the keynote address. In February 1946 depot employees began modifying B-29s for atomic testing near the Bikini Atoll, and the historic Enola Gay made its first visit to Tinker for an overhaul. On July 2, 1946, the depot received another name change as the Oklahoma City Air Technical Service Command became the Oklahoma City Air Materiel Area. In 1947 Tinker employees began working on jet engines and also completed a modification of Pres. Harry S. Truman's C-54 airplane, the "Sacred Cow."

Subsequent to creation of the Department of the Air Force in 1947, the airfield received its modern name, Tinker Air Force Base, effective January 13, 1948. The year proved to be one of the most notable in the installation's long history. Five days following a massive tornado that caused more than $10 million in damage to aircraft and facilities, another tornado threatened central Oklahoma. On March 25, 1948, base meteorologists issued the first official tornado warning in American history. Another form of Tinker expertise took center stage in late 1948 when the Soviet Union blockaded Berlin, and Oklahoma City depot leaders went to Burtonwood, England, to establish procedures for the successful airlift mission that saved the German city from Russian domination.

The 1950s pulled the United States and Tinker AFB into the Korean Conflict. B-29s, B-50s, and B-36s came to the base for modifications necessary to combat communist aggression. The work force increased in numbers as the depot work load continued to expand. Soon new aircraft types such as the B-47, B-52, and KC-135 were seen in Tinker hangars as Cold War deterrence ushered in another generation of weapon systems. Base workers provided logistics support during the Suez Crisis in 1956 and the Cuban Missile Crisis of 1962. The first C-141 Starlifter in the USAF inventory, named the Spirit of Oklahoma City, was delivered to Tinker AFB in October 1964. For the next ten years all thoughts were on the war in Southeast Asia as Vietnam-weary aircraft and airmen passed through Tinker's portals. During the period well more than two thousand A-7 Corsair IIs, F-4 Phantoms, and B-52 Stratofortresses received depot repair and modification.

Political threats on the home front caused fear that Tinker might be closed. However, a well-orchestrated bond election in May 1973 proved the mettle of community support as Oklahoma County voters overwhelmingly passed a bond election to buy and remove 836 private residences in the runway approach zone. On April 1, 1974, the Oklahoma City Air Materiel Area became the Oklahoma City Air Logistics Center (ALC). Three years later the first E-3 aircraft arrived at Tinker AFB as the 552d Airborne Warning and Control Wing (AWAC) recognized the merits of co-locating its main operating base with its maintenance and repair center. The unusual-looking radar and communications aircraft with a rotating dome on top of the fuselage became a frequent sight in the Sooner skies and a sign of American interests around the world.

In the 1980s Tinker returned to work-force and work-load levels not seen since the end of the Vietnam War. Pride in aviation achievement was demonstrated when an estimated two hundred thousand people saw the space shuttle Columbia, riding atop a B-747, land at Tinker on April 27, 1981. In 1988 the first B-1B bomber arrived for programmed maintenance and overhaul. That same year the center assumed management responsibility for the B-2 stealth bomber. When Operation Desert Shield began in August 1990, Tinker associate units deployed to the Near East, and the base's aerial port of embarkation began moving cargo and troops to areas of operations. In January 1991 conventionally armed, air-launched Cruise missiles, modified at Tinker, were among the first weapons fired in the Gulf War.

The Navy's Strategic Communications Wing One re-located to Tinker in May 1992, allowing the unit's E-6 aircraft to be maintained while providing communications to its worldwide fleet. Having the first naval operational unit assigned to an Air Force base, Tinker became a model for defense interservice cooperation. The pace-setting practice was one of the factors enabling Tinker AFB to survive base closures in 1993 and 1995. The future looked even brighter after the 1999 announcement that the public-private team of the Oklahoma City ALC and Lockheed-Martin Corporation had won a $10 billion engine work load bid competition.

Always a community partner, Tinker supported relief efforts after the bombing of the Murrah Federal Building in Oklahoma City in April 1995 and after a devastating tornado struck Oklahoma County in May 1999. Military and civic leaders opened the Heritage Airpark to the public in January 2000 to display historic aircraft that had been a part of Tinker's operations during the previous six decades.

After a terrorist attack in New York City in September 2001, heightened security and urgency could be observed all around the base. For the first time since the Revolutionary War, foreign troops helped defend the United States as North Atlantic Treaty Organization aircrews began flying operational missions out of Tinker AFB.

James L. Crowder, "The Politics of History: Tinker Air Force Base and the Enola Gay," The Chronicles of Oklahoma 75 (Winter 1997–98).

James L. Crowder, "Tinker's Twin Twisters of 1948 and the Birth of Tornado Forecasting," The Chronicles of Oklahoma 78 (Fall 2000).

The following (as per The Chicago Manual of Style, 17th edition) is the preferred citation for articles:
James L. Crowder, “Tinker Air Force Base,” The Encyclopedia of Oklahoma History and Culture, https://www.okhistory.org/publications/enc/entry?entry=TI004.