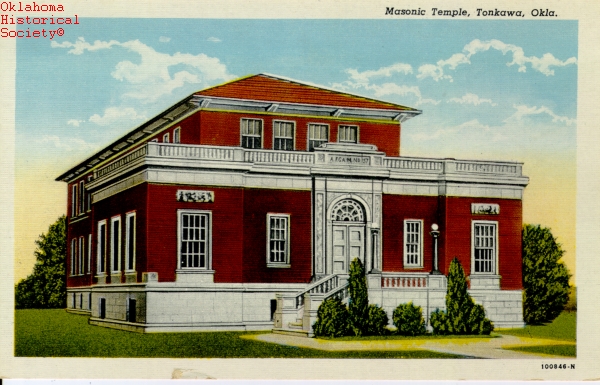 Located in southwestern Kay County and along the Salt Fork of the Arkansas River, Tonkawa is situated one mile east and south of the junction of Interstate 35 and U.S. Highways 77/177 and fourteen miles west of Ponca City. Between 1879 and 1885 the Nez Perce inhabited this area. In 1885, after the Nez Perce returned to their northern home, the Tonkawa and Lipan Apache were placed on the former reservation in Indian Territory.

When the land became available for settlement by non-Indians during the Cherokee Outlet Opening in 1893, Eli V. Blake and Wiley William Gregory, two farmers from Kansas, claimed adjoining quarter sections. They decided to donate some of their land to form a town. Named for the Tonkawa tribe, the town was platted in March 1894. A post office was established on March 9, 1894, and Blake served as postmaster. Early newspapers included the Salt Fork Valley News, the Tonkawa Register, and the Tonkawa Weekly.

Transportation, education, agriculture, and oil have been important factors in Tonkawa's development. In 1899 the Blackwell and Southern Railway (later purchased by the Atchison, Topeka and Santa Fe Railway) completed their line through the town, greatly stimulating its growth. In 1901 the Oklahoma Territorial Legislature approved the establishment of the University Preparatory School (now Northern Oklahoma College) in Tonkawa. At 1907 statehood the population stood at 1,238 and in 1910 at 1,776. By 1911 the prosperous agricultural trade center had a school, three banks, and five churches. An oil boom in the 1920s created a temporary population of approximately fifteen thousand, a number that leveled to 3,311 by 1930. In 1941 a National Youth Administration radio-training program was established in Tonkawa. The program was initially started to train radio engineers; however, instruction was soon offered to U.S. Navy recruits during World War II. In September 1942 one of Oklahoma's eight prisoner of war base camps was built at Tonkawa. War-related activities helped the community to grow to 3,643 in 1950, the peak year of population. The census counted 3,337 inhabitants in 1970 and 3,127 in 1990.

At the turn of the twenty-first century Tonkawa, with a council-manager form of town government, had a population of 3,299. Citizens supported the weekly Tonkawa News newspaper and a school system, which offered grades prekindergarten through high school. The 2010 census counted a slight population decline to 3,216. Buildings and sites listed in the National Register of Historic Places were the First Presbyterian Church of Tonkawa (NR 94001081), the Mahoney House and Garage (NR 84003074), the Tonkawa National Guard Armory (NR 88001363), and the site of the Nez Perce Reservation (NR 74001663). Local attractions included the A. D. Buck Museum of Science and History, the Tonkawa Historical Museum, and the Tonkawa Tribal Museum.

William P. Corbett, "Peerless Princess of the Best Country: The Early Years of Tonkawa," The Chronicles of Oklahoma 63 (Winter 1984–85).

The following (as per The Chicago Manual of Style, 17th edition) is the preferred citation for articles:
Linda D. Wilson, “Tonkawa (town),” The Encyclopedia of Oklahoma History and Culture, https://www.okhistory.org/publications/enc/entry.php?entry=TO004.