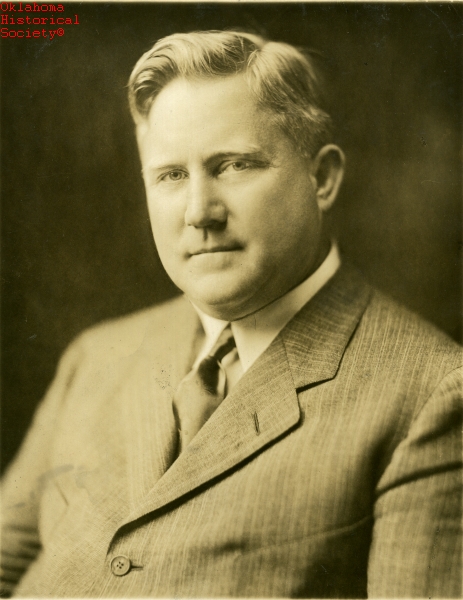 Oklahoma's sixth governor, Martin Edwin Trapp was born in Robinson, Kansas, on April 18, 1877, the son of Charles F. and Mary C. Capps Trapp. Charles Trapp participated in the Land Run of 1889 and settled on a farm near Guthrie. After receiving an education through private tutelage and public schools as well as the in Capital City Business College in Guthrie, Martin E. Trapp taught at Coyle, Oklahoma Territory.

A Democrat, Trapp first entered politics in 1905, serving as Logan County clerk. At 1907 statehood he became the state's first auditor. That same year he married Lulu "Lou" Strang, daughter of Judge Jeremiah C. Strang. Trapp won the race for lieutenant governor in 1914 and was reelected in 1918 and 1922. In March 1921 he avoided impeachment charges of fraudulent conspiracy by a partisan vote of the state senate. When Gov. John Walton was impeached on November 19, 1923, Trapp became governor.

As governor, Trapp economized state government, and at the end of his term in 1927 the state treasury had a surplus. He promoted good roads for businesses as well as for farmers. During his tenure power was transferred from county commissioners to the state level through several newly established and reorganized agencies. Those included the Oklahoma Highway Commission, the Oklahoma Fish and Game Commission, and the Oklahoma Bureau of Criminal Identification and Investigation. Trapp's activities engendered opposition from county commissioners, from organized labor, and from one faction of the Ku Klux Klan (KKK). In November 1924 that KKK faction started a movement to impeach him. However, it failed. In 1926 Trapp announced his intention to run for governor, based on his belief that he had served out Walton's term as acting governor. But the state supreme court ruled that he had served as governor and could not succeed himself. Another attempt for the governorship in 1930 failed.

Following his political career Trapp returned to the private sector. In addition to forming a business relationship with George T. Blankenship in the construction business, Trapp had oil and gas interests and was a bond broker. Active in numerous clubs and organizations, he was a member of the Masonic order, the Independent Order of Odd Fellows, and the Benevolent and Protective Order of the Elks. The Trapps had one son, Martin E. Trapp, Jr. The senior Trapp died on July 26, 1951, following surgery at St. Anthony Hospital, Oklahoma City. He was buried in Fairlawn Cemetery.

The following (as per The Chicago Manual of Style, 17th edition) is the preferred citation for articles:
Linda D. Wilson, “Trapp, Martin Edwin,” The Encyclopedia of Oklahoma History and Culture, https://www.okhistory.org/publications/enc/entry.php?entry=TR007.