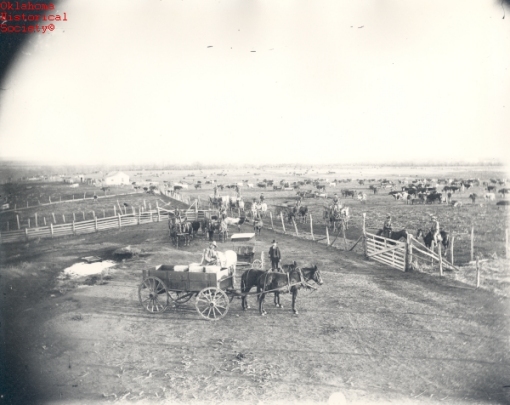 A rancher, an entrepreneur, and an early pioneer of Muskogee, Clarence Turner was born on June 18, 1857, in Cleveland, Ohio. In 1870 his father, John Turner, moved the family to Okmulgee and operated a store as a licensed Indian trader. After several years of helping his father in the store, the younger Turner attended one year at a business school in St. Louis, Missouri. In 1875 he and a partner purchased Turner's father's Okmulgee operations. In 1878 Turner married Nannie Murray, who died shortly after giving birth to a son, William. In 1879 Turner bought out his associate, but in 1881 sold the establishment and briefly focused on ranching. In 1882 he returned to the hardware business, buying a store in Muskogee. The establishment burned down twice, with Turner quickly rebuilding each time. In 1883 he married Tookah Butler and had three children, Tookah, Clarence, Jr., and Marion Elizabeth.

Turner's Creek customers trusted him, and he fluently spoke their language. A close friend with Pleasant Porter, Turner and the future Creek principal chief partnered for many business ventures, including ranching. In 1888 the two fenced in a large amount of Creek land to lease to cattlemen from Texas, creating resentment within the nation and prompting new pasture laws. Prior to 1907 statehood Turner owned two ranches, the Three-Bar Ranch, on Pecan Creek southwest of Muskogee, and the Heart-Cross Ranch near present Inola. In addition to his hardware store, he invested in many businesses that not only earned him money, but helped Muskogee grow. These included the first phone company, the first ice plant and electric company, a coal mine, a lumber company, a furniture store, and real estate. He also helped finance the first brick courthouse, organized the Muskogee Development Company, worked to persuade the St. Louis and San Francisco Railway (Frisco) to build through Muskogee, and, with Porter, donated land in Muskogee for the school that became Henry Kendall College. A Republican, Turner served a term as alderman. In 1888 he was a founding member of the Muskogee Masonic lodge and a key contributor to the International Indian Territory Fair. On April 21, 1931, Clarence Turner died in St. Louis. He was buried in Muskogee. His obituary in the Muskogee Phoenix lauded him as "the man who made Muskogee a city."

Clarence W. Turner, "Events Among the Muskogees During Sixty Years," The Chronicles of Oklahoma 10 (March 1932).

The following (as per The Chicago Manual of Style, 17th edition) is the preferred citation for articles:
Larry O'Dell, “Turner, Clarence William,” The Encyclopedia of Oklahoma History and Culture, https://www.okhistory.org/publications/enc/entry.php?entry=TU020.