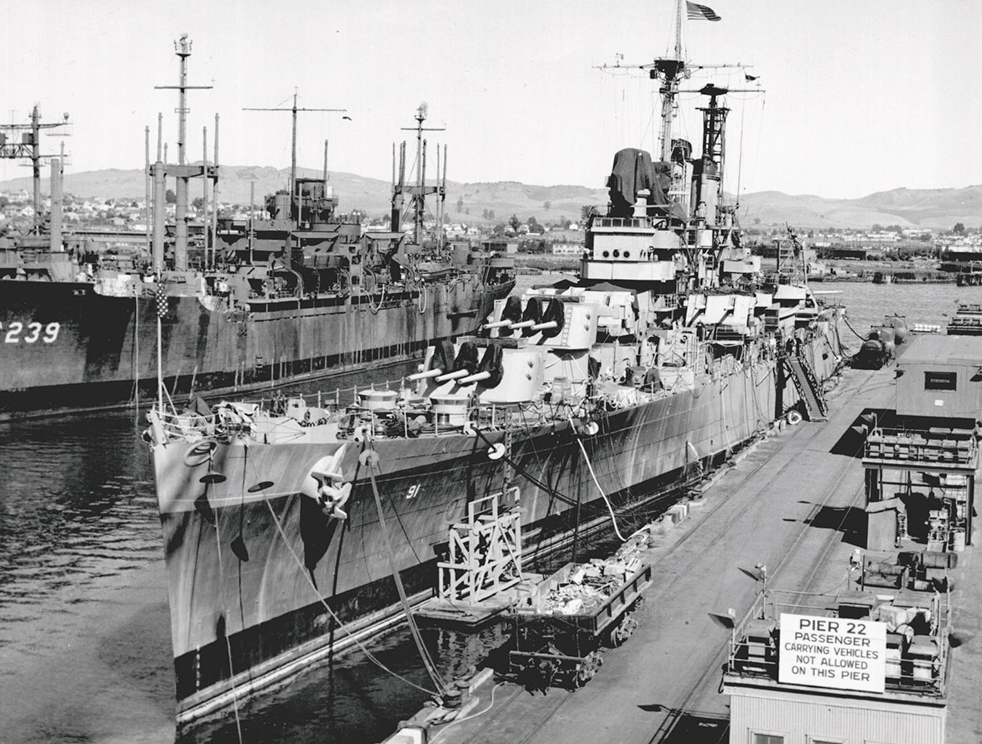 The Oklahoma City (CL-91) was laid down in December 1942 at Philadelphia, Pennsylvania. A Cleveland light-class cruiser, the Oklahoma City had a modest armor belt about five inches thick at critical points. The main battery consisted of twelve six-inch guns and twelve five-inch guns. During the nation's emerging era of carrier aviation strike forces, the vessel would come to rely heavily on antiaircraft batteries of twenty-eight 40 millimeter and fourteen 20 millimeter guns. The ship could maintain a speed of thirty-three knots when fully under way and could accommodate two small seaplanes in a hangar located on the stern.

Known as "the Okie Boat," the Oklahoma City was assigned to the Fast Carrier Task Group Thirty-eight under Vice Adm. William F. Halsey. The ship provided a surface force screen for U.S. aircraft carriers operating off the Ryukyus and Japanese home islands. The ship also attacked targets on the Japanese mainland in preparation for a possible invasion. After Japan surrendered in August 1945, the Oklahoma City engaged in occupation duties and then was decommissioned and placed with the reserve fleet in June 1947.

The Oklahoma City began its second life in 1957 as a guided-missile cruiser. Recommissioned in 1960 as CLG 5, the ship was the first combat vessel of the Pacific fleet to successfully fire a Talos missile, the U.S. Navy's original surface to air missile (SAM). To make room for a Talos missile battery, the World War II antiaircraft guns were removed and the five-inch battery of twelve guns reduced to two. The two aft six-inch guns were also removed, leaving the vessel with a single six-inch turret forward. Also outfitted as a flagship, the Oklahoma City returned to Japan in December 1960 and remained home ported at Yokuska, Japan, for the last of its active service.

After South Vietnam fell in 1975, Oklahoma City assisted with Vietnamese refugee evacuation. By June 1975 the ship was reclassified as a Guided Missile Cruiser (GC). The Oklahoma City served out her remaining days in the Far East as Seventh Fleet flagship and was finally decommissioned on December 15, 1979.

The following (as per The Chicago Manual of Style, 17th edition) is the preferred citation for articles:
C. P. Neimeyer, “USS Oklahoma City,” The Encyclopedia of Oklahoma History and Culture, https://www.okhistory.org/publications/enc/entry?entry=US004.