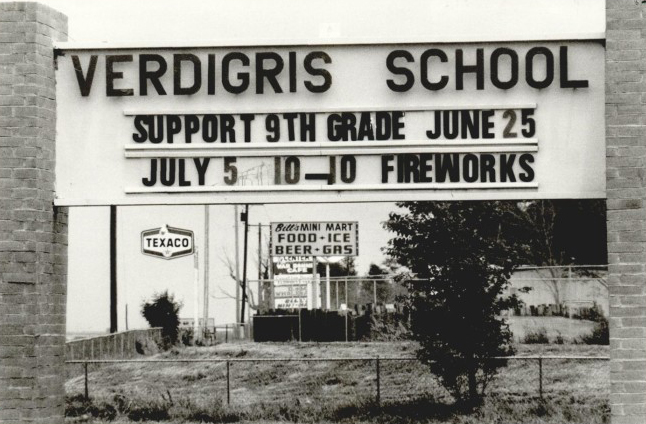 An incorporated town in Rogers County, Verdigris is located two miles south of the Verdigris River, six miles southwest of Claremore, and approximately eighteen miles north east of Tulsa. As a rural community in the Cherokee Nation in the 1880s, it had a post office by March 12, 1880, which lasted until 1954. Because Vergidris was situated on the line of the St. Louis and San Francisco Railway, it was sometimes called Verdigris Switch, for the associated loading chutes and stock pens used by local ranchers in shipping their cattle to market. The community's early history is not well documented, but by at least 1909 it sustained an approximated population of 25. At that time the residents supported Bland's General Store, Hensley's General Store, McCoy Hardware and Lumber, a blacksmith shop, and Challburg Brothers Grain and Hay store. Pioneer Telephone Company provided service. The population grew to around 75 by 1911 and remained at that level until the end of World War I.

In 1922 an employment boom resulted from a new industry, the Lock Joint Pipe Company. Lock Joint set up a factory to produce pipe for the nearby Spavinaw Lake project, which was designed to provide water to Tulsa. During the temporary boom, numerous stores, restaurants, and other town amenities set up shop. Residents could attend an Assembly of God or a Methodist church. Lock Joint's plant continued in operation until spring 1924. When it closed, the boom went away, and hundreds of workers left. As noted by Maggie Culver Fry, a Verdigris native and one-time Oklahoma Poet Laureate, the town returned to its former self. U.S. Highway 66 was constructed through town in the 1920s. The estimated 1930 population was 250, and the town had grade school through high school facilities and two churches. By the 1950s Verdigris remained small.

During the decades after World War II light industries began developing installations near Verdigris. By the 1990s the city encompassed three industrial parks, and population grew in order to provide workers for local industry. The outlet for products was the nearby Port of Catoosa, directly west of town. Verdigris incorporated on June 6, 1980, primarily to forestall absorption by the City of Claremore. At the turn of the twentieth century a rail line served the city, U.S. Highway 66 remained, and Interstate 44 also traversed the town. No census figures are available before 2010, but at that time Verdigris maintained a school district, a fire district, and a sewer district for a population that the U.S. Census counted at 3,993.

The following (as per The Chicago Manual of Style, 17th edition) is the preferred citation for articles:
Dianna Everett, “Verdigris,” The Encyclopedia of Oklahoma History and Culture, https://www.okhistory.org/publications/enc/entry.php?entry=VE009.