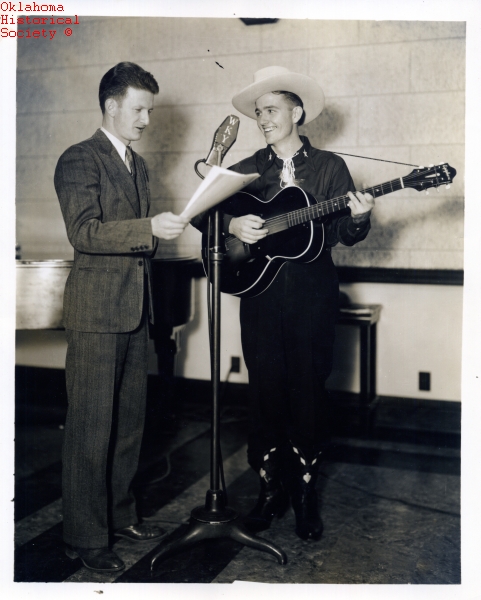 Born James Clarence Wakeley (original spelling) in Minneola, Arkansas, on February 16, 1914, Jimmy Wakely became a "B" Western star as well as a famed singer and songwriter. When he was still a young boy, Wakely's family moved to the vicinity of Battieste, Oklahoma. In 1936 he debuted on WKY radio in Oklahoma City. The next year he joined with Johnny Bond and Scotty Harrell to form the Singing Cowboy Trio, later known as the Bell Boys and the Jimmy Wakely Trio. This band performed over WKY and also KVOO in Tulsa and kept a busy live-performance schedule around the state. In 1940, after a vague invitation by Gene Autry, Bond and Wakely relocated to California. There they joined Autry's Melody Ranch program with new trio member Dick Reinhart. By 1942 Wakely had started working on solo projects.

Although he and his band performed supporting roles in movies starring Autry, Roy Rogers, and others, in 1944 he signed with Monogram Pictures and began to play the lead. Styling himself after Autry's singing cowboy persona, Wakely made twenty-eight pictures between 1944 and 1949 for Monogram. The first, Song of the Range (1944), was followed with West of the Alamo (1946), Six Gun Serenade (1947), Oklahoma Blues (1948), and Gunrunner (1949). In many of these films Walter "Cannonball" or "Dub" Taylor, who had been a student at Oklahoma City's Classen High School, played Wakely's sidekick.

Decca Records had Wakely and his band under contract beginning in 1941; in 1947 he signed with Capitol Records. A talented singer, he had success with the Christmas song "Silver Bells," as well as "One Has My Heart, the Other Has My Name" and "Slippin' Around," among others. In 1952 he hosted the CBS radio program Hollywood Barn Dance, which became The Jimmy Wakely Show and lasted until 1958. From 1949 until 1952 DC published a comic book starring Wakely, and in 1961 he was on a short-run television program, Five Star Jubilee, with Tex Ritter. In the mid-1960s he started his own successful record company, Shasta Records. Jimmy Wakely died on September 23, 1982, at Sylmer, California.

The following (as per The Chicago Manual of Style, 17th edition) is the preferred citation for articles:
Larry O'Dell, “Wakely, James Clarence,” The Encyclopedia of Oklahoma History and Culture, https://www.okhistory.org/publications/enc/entry.php?entry=WA006.