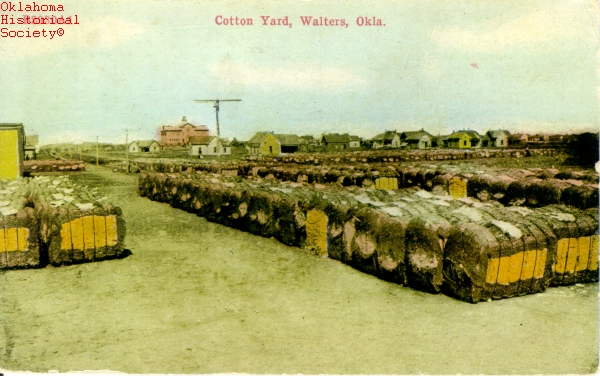 The Cotton County seat, Walters lies at the junction of State Highways 5 and 53, and just east of Interstate 44 and U.S. Highway 277/281, approximately nineteen miles south of Lawton. The town emerged from the August 6, 1901, Kiowa-Comanche-Apache Opening, which was conducted by lottery. The federal government set aside a townsite on Cache Creek in the former Comanche Reservation. The residents at first called the settlement McKnight, honoring Maj. H. D. McKnight, registrar at the Lawton land office. However, this name had already been taken, and the community then named the town Walter, either for McKnight's son or for a prominent resident, William Walter(s). Established in September 1901, the post office was designated Walter, but in 1917 Congress allowed it to be changed to Walters. The town was initially in Comanche County.

Walters was incorporated in 1902. In that year Cache Creek flooded the town, prompting most of the residents to move to a 160-acre townsite directly south. In 1901–02 the Enid and Anadarko Railway (obtained by the Chicago, Rock Island and Pacific Railway in 1903) laid tracks through the area. In 1905 the Oklahoma Territorial Legislature, through Council Bill Number 80, recognized Walters as an incorporated town. In 1910 the population stood at 1,377, and the town had three banks, two newspapers, four hotels, and all other retail amenities, including a farm implement store, for a growing populace in an active agricultural region. In 1912 Cotton County was formed from the southern portion of Comanche County. Later that year the county voted for Walters to be the seat of government. In 1918 four cotton gins, two grain elevators, a flour mill, a feed mill, a creamery, and a number of livestock brokers served the area farmers. The town also had a cigar factory, a municipal lighting plant and water works, and telephone connections furnished by Southwestern Bell Telephone Company. In the late 1910s speculators drilled oil and gas wells in northwestern Cotton County, and Walters developed as a service and supply center for the industry.

By 1920 the town had grown to 3,032 residents, but it declined to 2,238 in 1940. In 1927 the original wood-frame county courthouse was replaced with a three-story, concrete building designed by architects Tonini and Bramblett. In the 1930s the town still had four gins, two elevators, and a creamery. A poultry-packing company served the area's large contingent of turkey growers. Oil-related companies composed the majority of the businesses. In the 1930s the Works Progress Administration directed the building of Lake Boyer, a municipal water supply and recreation area. Early-twentieth-century newspapers that reported to the town included the Walter Record, Walter World, Walter Democrat, Walters Journal, Cotton County Democrat, Cotton County News, Cotton County Enterprise, New Era, and the Walters Herald that continued into the twenty-first century. In 1950 the population had climbed to 2,743.

Ranching, wheat, cotton, and oil continued as economic staples through the twentieth century. The population remained relatively stable, with 2,825 in 1960, 2,778 in 1980, and 2,519 in 1990. At the end of the twentieth century one bank remained, and the business district, supported by regional economic pursuits, remained active. In 1984 the city bought the Rock Island Depot, and the Cotton County Art Council rehabilitated the building, turning it into a museum. The depot (NR 98001147), the First United Methodist Church (NR 83002082), and the Cotton County Courthouse (NR 84002990) have been listed in the National Register of Historic Places. Several of the World War II Comanche "Code Takers" hailed from the Walters vicinity. Politician Fred Harris and actor Van Heflin were born in the town. Basketball coach Abe Lemons graduated from the Walters High School, and U.S. Rep. Jed Johnson, Sr., operated a law firm there. In 2000 the population stood at 2,657 and in 2010, at 2,251.

The following (as per The Chicago Manual of Style, 17th edition) is the preferred citation for articles:
Larry O'Dell, “Walters,” The Encyclopedia of Oklahoma History and Culture, https://www.okhistory.org/publications/enc/entry.php?entry=WA011.