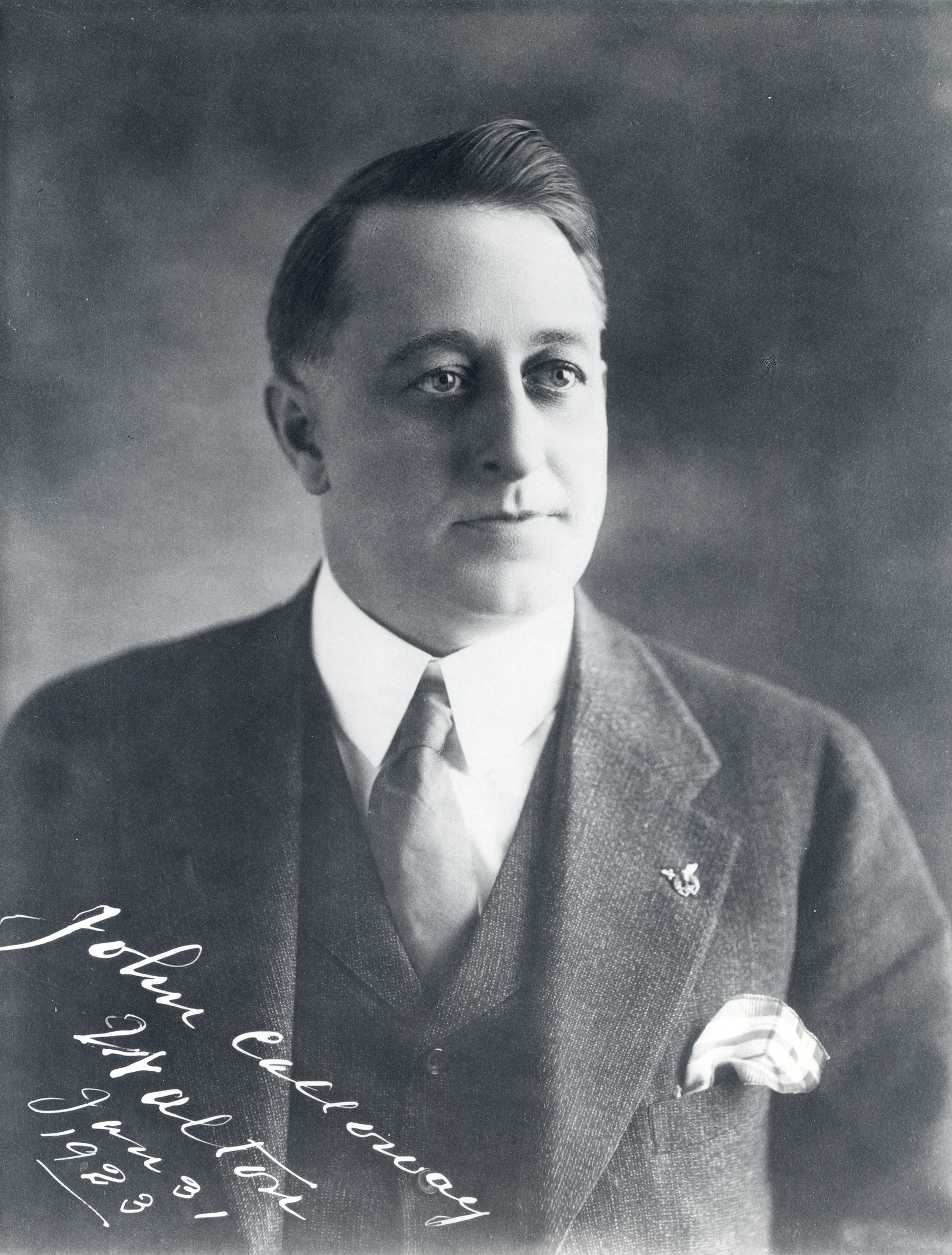 In January 1922 Jack Walton, mayor of Oklahoma City, inflamed over attempts to declare martial law in Oklahoma City due to a labor-related lynching of an African American, berated the chamber of commerce for "killing the city by their promotion of labor strife, and wanting to finish the job by declaring martial law." Ironically, the next year Walton, as governor, declared all of Oklahoma under martial law with three counties subjugated to absolute martial law. The only governor of Oklahoma that the Farmer-Labor Reconstruction League ever endorsed, Walton not only turned on this mixture of Socialists, Democrats, and union adherents, but engaged in an out-and-out war with the Ku Klux Klan, leaving himself with few friends. In his first year as governor the Oklahoma's Ninth Legislature impeached John Calloway Walton, making him the first governor to receive that dubious honor, although impeachment had threatened four out of the state's first five governors.

Born in and raised in a rural setting, Walton moved from a farm in Indiana to a farm just north of Lincoln, Nebraska, at an early age. In the late 1880s John's father moved the family to Fort Smith, Arkansas. There young Walton spent his formative years and attained his education. Facts about his early adult life are sketchy and convoluted. Walton and a partner organized the McIntosh and Walton Engineering Company around 1913 in Oklahoma City.

In 1917 Oklahoma City voters elected Walton commissioner of public works. Two years later, with what would become his familiar active campaigning and use of a jazz band, Walton achieved the office of Oklahoma City mayor. During his two-year stint he caught the eye of the reorganizing Socialists, farmers, and labor unions for his support of meat packing strikers in the city. During this strike the mayor refused to provide police protection to the owners and provided food for strikers. This behavior accelerated a rift between the mayor's office and the chamber of commerce. When Jake Brooks, an African American employee of Wilson and Company packing plant, was lynched, the chamber of commerce called for the assistance of Gov. James B. A. Robertson. Walton vehemently refused the state's help and accused the chamber and open shop committee chairman, John Shirk, of being part of the problem.

In September 1921 Socialist leaders, farmers' organizations, and labor unions met in Shawnee and formed the Farmer-Labor Reconstruction League. Again in February this organization met in Shawnee and selected candidates for the upcoming state elections. The league nominated Walton for governor on the Democratic ticket. Walton defeated Klan-supported R. H. Wilson and conservative Democrat Thomas H. Owens in the primary. Riding the Democratic sweep of 1922, he won a lopsided victory over Republican John Fields in the general election. His inauguration consisted of a huge barbecue with over a mile of trenches to cook tons of meat. He invited the whole state and entertained more than 160,000 people with parades, brass bands, and string bands.

Advised by Patrick Nagle, Governor Walton pushed through the legislature laws that adhered to the Shawnee Convention mandates. Most of these benefited farmers. One law helped establish agricultural warehouses, another advanced farmer's cooperatives, and a third set up licensing regulations for farmers' community market associations. These few accomplishments quickly were forgotten as the governor began a series of controversial actions. The first problem arose over Walton's liberal use of pardons and clemency. Walton had a strong aversion to the death penalty and vowed that none would occur while he held office. This strong sense of benevolence carried over into his pardon and parole practices, although many claimed that bribery and other underhanded dealings bought these clemencies. Walton also packed the state government and affiliated agencies with friends and political allies, oftentimes creating jobs for them.

Along the lines of patronage was Walton's interference in the state's colleges. Chafing from lack of support from educators at the University of Oklahoma, Walton sought to oust the president, Dr. Stratton Brooks, but Brooks left to preside over the University of Missouri. Walton then removed five of the university's regents and replaced them with his backers. At Oklahoma A&M College Walton had the president, Dr. James B. Eskridge, fired and replaced him with George Wilson, a strong Farmer-Labor Reconstruction League supporter who did not possess a baccalaureate degree. Stillwater residents and students of the college demonstrated, but Walton sent Oklahoma National Guard troops with Wilson on the day Wilson became president.

The governor alarmed some of his core labor and farm constituents when, with the backing of E. W. Marland, he purchased a mansion in Oklahoma City and a residence in Muskogee. The Reconstruction League also complained about the number of state positions Walton bestowed on men not connected to their group. Later he removed Wilson from A&M and similarly ousted other Reconstruction League members he had appointed. Walton began to backtrack on his radical comrades and started taking a conservative stance as he prepared for a U.S. Senate run.

On June 26, 1923, Walton put Okmulgee County under martial law to investigate Ku Klux Klan activity. This was the first in a series of confrontations with that group. In August he placed Tulsa under martial law and later absolute martial law to examine the Klan. The governor even placed a censor in the Tulsa Tribune office after the paper printed an advertisement encouraging Klan members to resist. The military court in Tulsa exposed numerous cases of terrorism. Although Walton carried out this war on the Klan, earlier in his administration Cyclops W. T. Tilly gave him the secret oath of the organization. Walton also had appointed some Klansman to state posts to win over the organization.

While the National Guard held court in Tulsa, legislators in the state capital began to organize a movement to oust the governor. Representative William McBee crusaded to convene the legislature to start impeachment proceedings. Knowing that a majority of the legislators belonged to the Klan, Walton declared the state under martial law to prevent the House and Senate from meeting. Despite the governor's efforts, the public voted three to one on an initiative petition to allow the body to convene. Knowing he was in dire straits, the governor called a special session to create an anti-Klan bill, but the legislature claimed they would consider that after investigating the governor. Walton offered to resign in exchange for strong laws against the invisible empire, but again the legislators rebuffed him.

By October 16, 1923, the Oklahoma House of Representatives had passed twenty-two articles of impeachment, including accusations of improper pardons and paroles, failure to use the death penalty, the hiring of unnecessary employees, and putting Tulsa and Okmulgee under martial law. Walton claimed in the press that he would bring in witnesses to attest to Ku Klux Klan terrorism. The prosecution sidestepped this by focusing on Walton's corruption in office and eventually dismissing the six articles that dealt with Klan activity. On November 19 the senate convicted Walton on eleven of the remaining articles and rejected five. The lawmakers then voted forty-one to zero to remove Walton.

In 1924 Walton won the Democratic primary for an Oklahoma Senate seat but lost the general election. He lost a bid for mayor of Oklahoma City in 1931, but in 1932 he successfully campaigned for corporation commissioner. This was his last office in Oklahoma politics, although he unsuccessfully ran for governor, county sheriff, and corporation commissioner after 1932. John C. Walton died on November 25, 1949.

Sheldon Neuringer, "Governor Walton's War on the Ku Klux Klan: An Episode in Oklahoma History," The Chronicles of Oklahoma 45 (Summer 1967).

The following (as per The Chicago Manual of Style, 17th edition) is the preferred citation for articles:
Larry O'Dell, “Walton, John Calloway,” The Encyclopedia of Oklahoma History and Culture, https://www.okhistory.org/publications/enc/entry?entry=WA014.