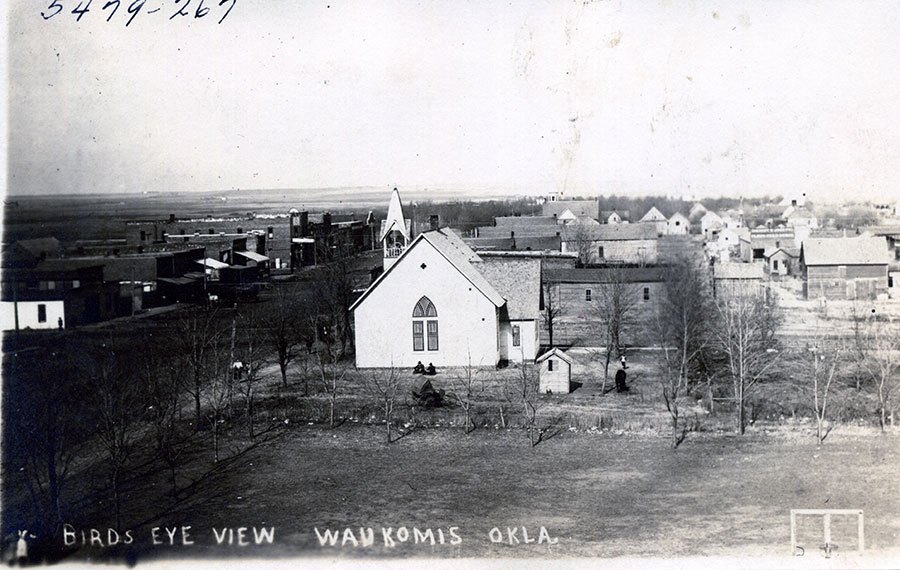 Located in Garfield County, five miles south of Enid on U.S. Highway 81, Waukomis was founded soon after the Cherokee Outlet opened to settlement in September 1893. Waukomis Township quickly filled with wheat farmers. In 1893 Charles Moore built a store in the area, and in November 1893 Frank Stevens was appointed postmaster. That month, the plat was filed. The settlement became known as Waukomis. Several explanations are offered for the meaning of the word, the most interesting being that railroad officials had to "walk home" from there to Enid. Incorporation came in April 1899, and by 1900, 688 people lived there. In the earliest years the Wizard and the World reported the news.

Transportation routes have always been significant in this area's history. The Chisholm Trail had passed near the east side of the future town, and four miles south lay the Buffalo Springs Stage Station. In 1889 the Chicago, Kansas and Nebraska Railway had constructed a line from Kansas through the area, generally along the cattle trail, and in 1891 the line was sold to the Chicago, Rock Island and Pacific Railway. The tracks lay on the east side of town, and a circa 1901 depot provided market access for local products.

As with most of Garfield County's agricultural communities, Waukomis had many businesses to serve farm families. A 1902 state gazetteer credited the town with a bank, two flour mill-grain elevator companies, two restaurants, a blacksmith, and a harness dealer. However, a fire in 1903 destroyed half of the buildings. By 1907 statehood 570 inhabitants lived and worked there.

During the first few years of statehood the community thrived. By 1909 it offered residents Christian, Congregational, Evangelical Lutheran, and Methodist churches, a graded public school, and the weekly newspaper, rechristened as the Oklahoma Hornet. Telephones and electricity were also available. The number of businesses numbered forty-three, including four elevators. Dr. S. F. Scott built the first stone buildings in town, one an opera house, both on Main Street. While the number of enterprises declined by the time of World War I, agricultural services still included a flour mill, three elevators, and a creamery. Residents could keep their money in two banks and socialize through membership in the Masonic lodge and Eastern Star.

The following (as per The Chicago Manual of Style, 17th edition) is the preferred citation for articles:
Dianna Everett, “Waukomis,” The Encyclopedia of Oklahoma History and Culture, https://www.okhistory.org/publications/enc/entry.php?entry=WA047.