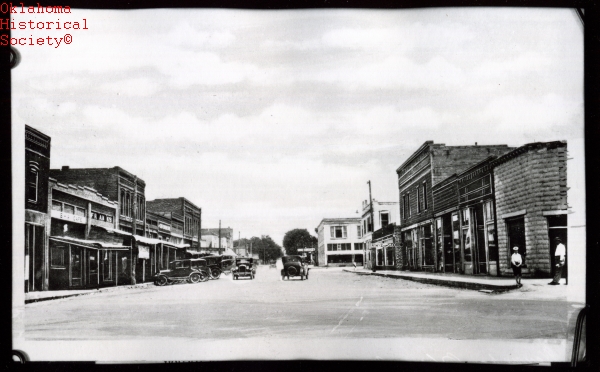 Located in southern Woods County near the Cimarron River and the Glass Mountains, Waynoka lies on U.S. Highway 281 and State Highway 14, seventy miles west of Enid. First called Keystone, Waynoka was founded in Indian Territory in 1887 when the Southern Kansas Railroad, a subsidiary of the Atchison, Topeka and Santa Fe Railway, built across northwestern Oklahoma. Approval for a post office came on April 10, 1888, the first in the Cherokee Outlet.

Waynoka's economy was originally based on the railroad and the vast ranches of the Cherokee Strip Live Stock Association. When the Cherokee Outlet, commonly called the Cherokee Strip, opened for non-Indian settlement in the land run of September 16, 1893, Waynoka became an agricultural trade center for the area. Substantial businesses soon occupied the town square.

In 1908 the Santa Fe Railway made Waynoka a division point and built Oklahoma's largest rail yards, operating twenty-four hours a day and eventually employing about one thousand machinists, boilermakers, sheet metal mechanics, fire builders, car men, switchmen, engineers, and others. Said to be the nation's largest, the ice plant built by the Railways Ice Company provided ice for refrigerator cars that hauled perishables on the railroad's main line from Chicago to Los Angeles. A roundhouse, maintenance and repair shops, a reading room, a depot, and a large Harvey House were built by the Santa Fe, and Waynoka businesses flourished.

After the coming of diesel-powered locomotives, the railroad moved its maintenance operations from Waynoka but continued train crew changes there until 1986. At the turn of the twenty-first century fifty to one hundred trains still passed daily near downtown Waynoka on Oklahoma's fastest and busiest rail line. Local entrepreneurs founded a successful fiberglass manufacturing company to provide employment after the large loss of railroad jobs.

Farming, ranching, and the energy industry provided the economic base for many years. Little Sahara State Park, about one mile south of town, provides year-round sport and camping facilities for off-road vehicle enthusiasts. In the 1990s citizens meticulously restored the Harvey House to showcase the town's transportation history. Waynoka has a mayor and council type of town government.

The following (as per The Chicago Manual of Style, 17th edition) is the preferred citation for articles:
Sandra Barker Olson, “Waynoka,” The Encyclopedia of Oklahoma History and Culture, https://www.okhistory.org/publications/enc/entry.php?entry=WA051.