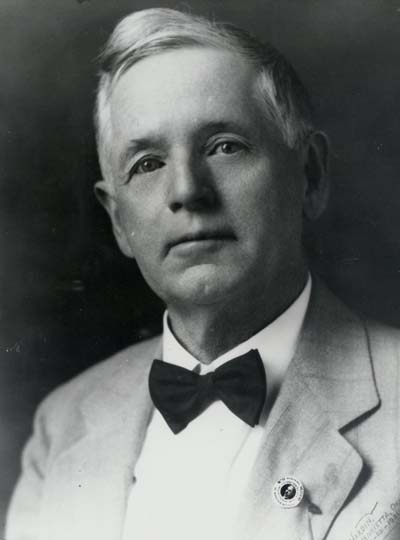 Born on March 19, 1867, in Gainesville, Texas, U.S. Rep. Claude Weaver was the son of W. T. G. and Nancy Wilkin Fletcher Weaver. W. T. G. Weaver, a noted orator, poet, and jurist, wrote the judiciary code of the Texas Constitution in 1876. After graduating from the Gainesville public schools, Claude Weaver entered the University of Texas and received a law degree in 1887. He then returned to Gainesville, and he practiced law until 1895. During this time, he married Leila Ada Reinhardt. The Weavers had four daughters and a son. They also had a foster daughter.

In 1895 Weaver moved his family to Pauls Valley, Indian Territory, and opened a law office. In 1898 he helped establish Pauls Valley's public schools, the first public education system in Indian Territory. By 1908 he had moved his law office to Oklahoma City. Active in civic affairs, he fought for the constitutional prohibition of the liquor trade in Oklahoma and championed the commission form of city government. In 1910 he drafted the Oklahoma City municipal charter.

In Oklahoma's first election to fill its U.S. Senate and House of Representatives positions in 1907, Weaver sought the Fifth District's seat in the House. A Democrat, he was a popular candidate but failed to win the nomination of the convention. In 1912 he campaigned for one of Oklahoma's three at-large seats and easily defeated his opponents. As a member of the Banking and Currency Committee, the Oklahoma congressman helped write the legislation that framed the Federal Reserve Act. Following redistricting, he battled for the Fifth District seat in 1914 but lost.

He returned to Oklahoma City and served as postmaster until 1923. During World War I he occasionally took a leave of absence to serve as a national spokesperson for the sale of war bonds. He sought to fill a vacancy in the Fifth District in 1919 but was defeated. In 1926 he substituted as the county attorney for Oklahoma County. From 1931 to 1934 he served as legal advisor and secretary to Gov. William H. Murray. When Oklahoma gained an at-large congressional seat in 1932, Weaver again campaigned for the position but lost. After an opening occurred in Oklahoma's Thirteenth District Court in 1934, Murray appointed him to the office. He held the judgeship for a year but failed to be reelected. He returned to his law practice, eventually retiring in 1947. Weaver died on May 17, 1954, in Oklahoma City. He was interred in Fairlawn Cemetery.

The following (as per The Chicago Manual of Style, 17th edition) is the preferred citation for articles:
Carolyn G. Hanneman, “Weaver, Claude,” The Encyclopedia of Oklahoma History and Culture, https://www.okhistory.org/publications/enc/entry.php?entry=WE003.